The UK’s referendum on EU membership in 2016 set off a chain of political events that can best be described as an ‘omnishambles’. But how did the country end up at this point, and what explains the approach pursued to implement Brexit following the result? Jeremy Richardson and Berthold Rittberger present their own overview of the Brexit saga, distinguishing between the idiosyncratic processes and the more general trends that led to the referendum and its aftermath.

Political satire and the reality of politics have been hand in glove in Britain for a long period. For example, the political satire TV series, The Thick of It, captured perfectly the serial chaos of elite politics in Britain. One 2009 episode featured the Minister for the (fictional) Department of Social Affairs and Citizenship being involved in a series of disasters, prompting the now famous rebuke from the Government’s Director of Communications, as follows:

‘Jesus Christ, you are a f***ing omnishambles, that’s what you are. You’re like that coffee machine, you know: From bean to cup, you f*** up.’

The term omnishambles, meaning a situation which is shambolic from every angle, was awarded the word of the year prize by the Oxford Dictionary in 2012, the jury saying that it had crossed over into real life in that year. Whatever happened in Britain in 2012, it pales into comparison with the Brexit omnishambles enacted in Britain 2016-19.

How, then, did the Brexit omnishambles come about? On the face of it, the answer is perfectly simple, namely the result of the fateful 2016 referendum. However, the Brexit story is one of slow tectonic forces at work, leading to spectacular eruptions, first in 2016, then throughout 2019.

The first possible cause is that Britain never quite ‘fitted’ the EU and was destined to leave at some point. Secondly, the EU itself contributed to the Brexit fiasco and might have been engaged in some kind of ‘slow burn’ blunder itself. Thirdly, Brexit was a domestic policy-making problem, exacerbated by long-term changes in the British policy style.

An obvious starting point for explaining Brexit is Britain as ‘an awkward partner’. The marriage would inevitably end in divorce. Britain joined for the wrong reasons (a marriage made in Hell not in Heaven), the EU as a partner developed more and more marriage habits that Britain disliked, and, eventually, Britain felt it could find better partners outside the marriage. No more explanation needed. This narrative is just too simple. First, we have no measure or definition of ‘awkwardness’. How do we know that Britain has been more ‘awkward’ than, say France, still remembered for the ‘empty chair’ episode in 1965? Was Mrs Thatcher any more ‘awkward’ in her 1988 “Bruges Speech” than General De Gaulle in 1965? However awkward Britain may have been, it was never threatened with the Article 7 procedure for breaching the EU’s founding values (the so-called nuclear option) as is the case with Hungary and Poland today. 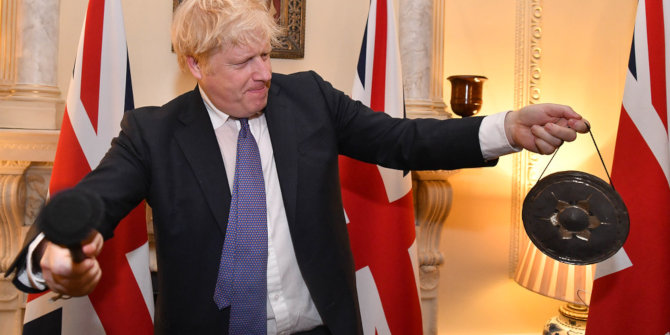 Moreover, does ‘awkwardness’ distinguish between being awkward at the policy making stage in the EU and being awkward at the stage of implementing EU policy? If we focus on EU policy-making, perhaps Britain has often articulated concerns that other member states shared but were reluctant to raise so clearly and publicly? As Daddow and Oliver argue, Britain has often been a constructive and influential partner notably regarding the Single European Act, economic reform, but also in policy areas such as deregulation, privatisation, climate change, and even animal welfare legislation.

Having joined late, Britain adjusted quickly to the EC/EU policy style. For example, Britain became a model of how to co-ordinate domestic EU policy-making, and British interest groups adapted to European level lobbying like ducks to water. In particular, if we look at the implementation of EU policy, it is simply impossible to characterise Britain as an awkward partner as it has an excellent record in implementing EU laws.

Thus, it is possible to turn the ‘awkward partner’ narrative on its head. Perhaps Britain was actually a good member of the EU, contributing constructively in EU policy-making, fighting hard when it felt the need to (just like other member states), and not regarding laws properly passed by the EU as simply ‘cheap talk’ to be ignored in practice. From this perspective, it was not inevitable that Britain would leave the EU at some point, as the EU and the UK had learned to live together rather well. Like most marriages, there are a few rows along the way!

As the saying goes it takes two to tango. It is easy to blame British governments and the British electorate for Brexit. However, the long-term role of European elites, and the EU institutions which they created and expanded, played a significant part in the emergence of the Brexit fiasco and, indeed, in the more general (very long-running and ‘to be continued’) crisis within the EU. The seemingly inexorable expansion of EU public policy helped to lay the bedrock of Brexit.

So great has been the EU’s expansion into ‘core state powers’, and so vast has been the reach of EU law, that the EU has developed into a veritable ‘policy-making state’. But whatever characterisation of the EU we choose, it is unarguable that the range of policy areas in which the EU has at least some remit is now vast. It has also gradually shifted towards a more coercive top-down policy style. Take the specific policy area of immigration, which has led to the dismantling of the boundaries of domestic labour markets as well as national welfare systems. The communitarisation of immigration policy has undoubtedly had a disproportionate effect on the attitudes of national electorates towards EU membership.

Against this backdrop, the EU itself might have been involved in two kinds of blunder. First, has it been in some kind of ‘slow burn’ blunder via task expansion, pushing integration generally too far and too fast for its peoples to swallow? Secondly, has the specific policy of free movement of workers turned out to be a policy disaster of considerable proportions because of its serious unintended consequences for the support of the integration project as whole?

Finally, turning to purely domestic policy-making factors, we need to be careful in seeing the Brexit omnishambles as something especially unusual in British politics. Brexit was certainly a spectacular omnishambles, but it was certainly not a unique example of the British policy-making process not running smoothly. Policy fiascos and blunders are as British as fish and chips! To be sure, for much of the post-war period, British policy-making emphasised fact based, deliberative, consensual policy-making. However, the post-1979 period has seen major changes in the British policy style, notably a considerable weakening of the civil service, the increasing role of political advisers in government, the arrival of ministers who are deeply committed to a particular set of ideas, and a considerable weakening of interest group influence .

The marginalisation of interest groups was part of a broader phenomenon, namely the marginalisation of experts. Pro-Brexit politicians had their own equivalent of President Trump’s ‘gut feelings’. The ultimate irony of the 2019 election is that the Conservatives were successful in convincing voters that they could clean up a mess which the Conservatives themselves had created and in managing to avoid any serious discussion of the huge policy problems to be solved in the period after Brexit. The irony of the finale to three years of Conservative omnishambles is emblematic for this day and age. It ended with a polished last act by someone, Boris Johnson, thought to be a buffoon.