What impact will the Covid-19 outbreak have on levels of political trust? Cevat Giray Aksoy, Barry Eichengreen and Orkun Saka find that individuals who experience epidemics in their impressionable years display less confidence in political leaders, governments, and elections for the rest of their lives.

It is widely argued (here, for instance) that the keys to success in dealing with Covid-19 are “whether citizens trust their leaders, and whether those leaders preside over a competent and effective state.” By way of example, Bo Rothstein ascribes the greater success at containing Covid-19 in the Nordic countries than in Italy in part to greater trust in government. Trust in government is not a given, however. Specifically, there is reason to ask whether Covid-19 itself will affect trust in political institutions and leaders.

Building on previous work suggesting that attitudes and behaviour are durably moulded in what psychologists and sociologists refer to as the “impressionable” late-adolescent and early-adult years, we show that exposure to epidemics at this stage in the life course durably shapes confidence in political institutions and attitudes toward political leaders. (On the “impressionable years” hypothesis, see here and here. For an economic application see here.)

Specifically, we find that individuals who experience epidemics in their impressionable years (specifically ages 18 to 25) display less confidence in political leaders, governments, and elections. The effects are substantial: an individual with the highest exposure to an epidemic (relative to zero exposure) is 7.2 percentage points less likely to have confidence in the honesty of elections; 5.1 percentage points less likely to have confidence in the national government; and 6.2 percentage points less likely to approve the performance of the political leader. (The respective averages of these three variables in our sample are 51 per cent, 50 per cent, and 50 per cent.) These effects represent the average treatment values for the remainder of life. They decay only gradually and persist for two decades: the difference between the median age during impressionable years (21.5) and the median age in the last subsample (40.5) corresponds to 19 years (Figure 2).

Figure 2: Effects of epidemics in impressionable years over subsamples with rolling age windows 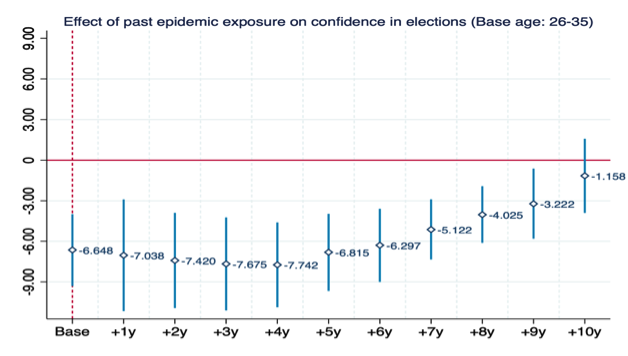 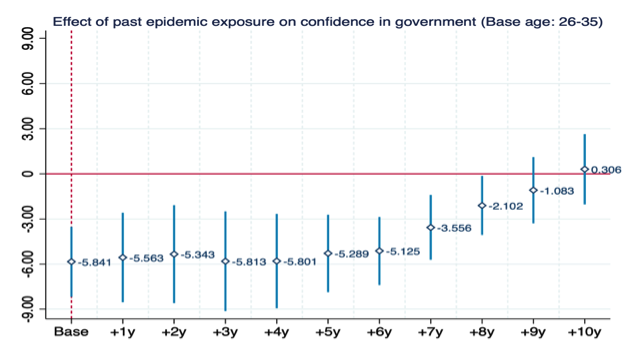 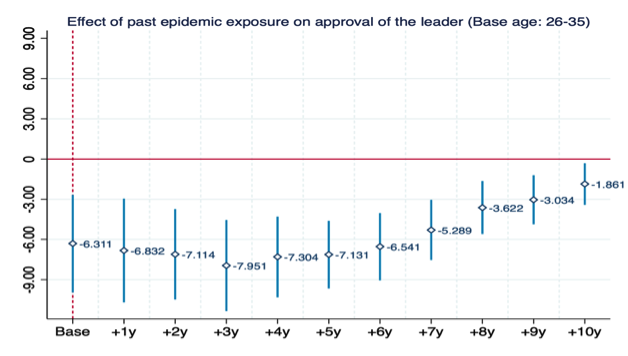 We substantiate this conjecture by considering this same conditioning factor, government strength, in the context of Covid-19. We show that government strength is associated with statistically significant improvements in policy response time (the number of days between the date of first confirmed case and the date of the first non-pharmaceutical intervention). This supports the notion that government strength at the time of the epidemic is a predictor of effective policy responses and that its absence amplifies the negative revision of political trust in response to epidemics.

Note: This article is based on “The Political Scar of Epidemics” EBRD Working Paper No. 245. It originally appeared at our sister site, LSE Business Review. The article gives the views of the authors, not the position of EUROPP – European Politics and Policy or the London School of Economics. Featured image by Gayatri Malhotra on Unsplash