Corporations are often thought to conduct most of their lobbying activities behind closed doors. As such, they may wish to avoid appearing in the news too frequently given the potential to attract public criticism over their political involvement. Drawing on a new study, Moritz Müller and Ellis Aizenberg examine the media strategies used by corporations to maximise their influence.

Picture your stereotypical movie lobbyist. Got it? Let us guess, the lobbyist is well-dressed, incredibly well connected, and aims to represent the interest of its client at any cost. But your imaginary lobbyist most likely operates ‘behind closed doors’ and avoids being seen. Research on interest groups has (at least partially) confirmed that corporations tend to dominate the stakeholder landscape when it comes to these better hidden places – called insider venues.

How can we explain then that business interests such as corporations are also the most overrepresented type of stakeholder to appear in news reporting, one of the most public stages to be on? Inspired by this curious contrast, in a recent study we investigated why corporations appear in the news using a massive dataset of over 13,000 newspaper articles that contain mentions of organisations. Knowing why corporations appear in the news is important, as most citizens still learn about politics via the news media. An overrepresentation of certain stakeholder types such as corporations might therefore bias citizens’ views on political topics. For a democracy to function at its best, citizens need access to a wide range of different ideas so that they can form well-informed and reasoned opinions about politics and policy-making.

We specifically aimed to test one of the few explanations of the motivations that corporations have to appear: to show that they are “worth being talked to” by policymakers. This idea comes from a theory on information politics. In a nutshell, the theory suggests that interest groups with essential policy information can use such information for two purposes. Firstly, to form alliances and protest against dominating policy ideas they wish to prevent (protest politics). Or, secondly, they present information to demonstrate policy expertise to key policymakers to gain a seat close to the decision table (information politics). We argue here that corporations mainly use media strategies to signal expertise through the transmission of technical information to specific constituencies such as policymakers or financial elites.

We tested these assumptions on a dataset of over 13,000 articles covering six different policy issues in two major British daily newspapers (the Guardian and The Times) between 2012 and 2017. Articles were searched for the appearance of organisations that appear in the UK parliament meeting register (for a more technical explanation of what we have done, please see our accompanying paper). We then determined for every one of these organisations, what type of actor this organisation is: for instance, is it a corporation, or is it an NGO? Regarding the news article characteristics, we calculated two widely used text complexity metrics. One metric measures how technical each article is (does it make use of a wide variety of words?), whilst the other measures how easy the article is to read (are the sentences very long? How long is the average word in the article?). Using this approach made it possible for us to determine which articles contained an unusually high occurrence of corporations and what the text characteristics of the articles were.

What did we find? First the expected finding: corporations are more likely to appear in news articles that are more technical in nature. When looking at the left part of the figure below, we see that the higher the text technicality is, the higher is the chance corporations are the dominating actor in the very same article. This would speak for the idea of information politics – after all, corporations tend to appear in the context of articles that seem to be rich in information. 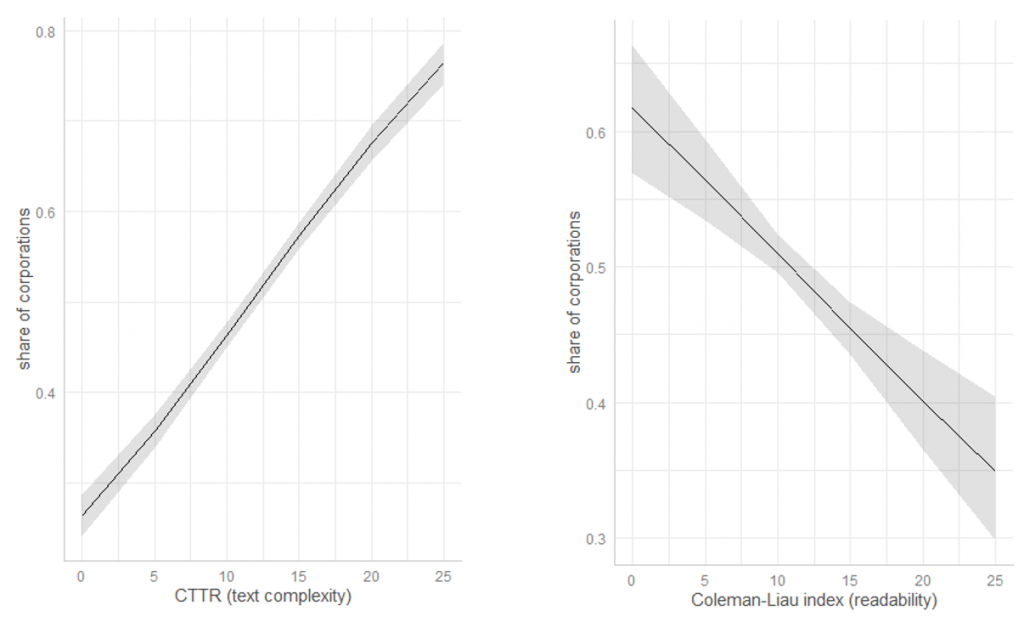 Now to the surprising part: corporations are also more likely to appear in articles that are easier to read. As stated above, we initially expected to find the exact opposite. A possible explanation could be that corporations are not necessarily afraid to take a risk and when seeking to maximise influence, they want to ensure that their specific constituency understands the coverage. Another explanation for this finding is that journalists nowadays often use the same readability scores that we employed for articles in order to make it accessible to the reader.

Importantly, our analysis does not show why corporations are more likely to appear in articles that are both information-rich and highly accessible to the public. Our study shows, for the first time, general patterns of the appearance of corporations and demonstrates that corporations appear in the public light in different contexts than other types of organisations. There are many other underlying dynamics of news coverage that are likely to be important, such as the direct motivations of corporations to pursue media strategies, the resources of such corporations, or the different news coverage dynamics in various policy areas. Future research will need to adapt different approaches to uncover these dynamics that are likely important.

We want to end this discussion on a positive note, by returning to our stereotypical movie lobbyist. Contrary to what we might often think, not all interest representation happens behind closed doors. Corporations and their preferences are very much in the public light and the news coverage that they receive is rather accessible to the public. This is a positive finding for the functioning of our democracies. That is, newspapers are an important source for citizens to learn about politics and thus enable them to form a well-informed opinion. For this very reason, coverage on key players in politics should therefore be accessible. In the end, our stereotypical lobbyist might not be too shy and might talk to journalists as a component of political strategies more often than we think.

Note: This article gives the views of the authors, not the position of EUROPP – European Politics and Policy or the London School of Economics. Featured image credit: Fred Moon on Unsplash

Moritz Müller – University of Amsterdam
Moritz Müller is a PhD Candidate at the Institute of Public Administration at Leiden University, Netherlands.