The European Ombudsman and European Court of Auditors both play an important role in guaranteeing the EU’s transparency, accountability and integrity. Anchrit Wille and Mark Bovens argue that the key to understanding the impact of the two institutions lies in the use of their powers, rather than the formal remits they have been assigned.

In the eyes of many European citizens, the EU has become a symbol of bureaucratic waste. Yet, citizens or organisations that experience problems with the EU’s administration, in terms of misconduct or corrupt behaviour, can contact the European Ombudsman (EO) and lodge a complaint. Meanwhile the European Court of Auditors (ECA) oversees how EU taxpayers’ money is used, and reports this to the EU Parliament and to EU citizens. These two EU watchdogs operate independently, with each playing a key role in securing the EU’s transparency, accountability, and integrity.

The work of auditors, ombudsmen and integrity offices in modern democracies increasingly complements the oversight functions of the established branches of government. Some even see them as an indication of the rise of a ‘fourth branch’ of government alongside the legislature, executive, and judiciary. These watchdog institutions have become more important as the programmes of the EU have become more complex and specialised. Scrutiny of EU governance increasingly requires the input of sophisticated ‘accountability professionals’. Likewise, audit institutions and ombudsmen are more and more seen as advocates of good governance, promoting best practices and institutional learning.

In a recent study, we systematically assessed the accountability powers of these two EU watchdogs vis a vis the EU executive with the help of a newly developed index that provides systematic evidence on three dimensions. A watchdog has strength if it has the formal powers to contribute to account holding, if it has the organisational powers to hold the executive to account, and if it actually exercises relevant account holding activities.

The index provides an instrument to gauge differences between watchdogs, and to monitor longitudinal developments. It also provides evidence of some clear trends in this fourth branch of government. Whereas previous research into independent oversight bodies emphasised the importance of the formal position and organisational powers (such as independence, autonomy, mandate and resources) of these institutions, our study indicates that it is the exercise of powers that determines the strength of these watchdogs in the contemporary accountability landscape.

Three elements in the exercise of accountability powers have become progressively more relevant for the expanding powers of these institutions. First, the two watchdogs play a clear role in the system of parliamentary fire alarms. The interaction between the watchdog institutions and parliaments and courts determine their role in the broader accountability landscape. The two watchdogs report and advise, but when push comes to shove, both institutions can only enforce accountability indirectly by referring their findings to the legislature and the judiciary. Their impact hinges to a large extent upon the quality of the system of cooperation with these institutions. The European Parliament depends on the Court of Auditors and the European Ombudsman for reliable information, while the watchdogs depend on the Parliament to provide a public forum for presenting and discussing their reports and recommendations.

Second, increased visibility has become an important aspect of reputation management, which has become critical for accountability management. Both watchdogs have not only increased their productivity over the last 15 years (see the two figures below), but have also diversified their output. In the past, the ECA focused chiefly on the compliance and regularity audit, but during the last decade more efforts have been devoted to conducting performance audits. The ECA uses its advisory role and publishes special reports, presenting the results of selected performance and compliance audits, which can be published at any time during the year, and opinions and position papers on topics related to EU financial management.

Likewise, the EO produces strategic inquiries, publishes special reports, decisions, and recommendations, and organises public consultations This diversification of output makes it possible to increase institutional branding. Both institutions try to make their products visible, employ strategic communication activities to engage with their various stakeholders and emphasise the relevancy of their work to the wider public of EU citizens – ‘the man on the bus’ in the ECA’s terminology. 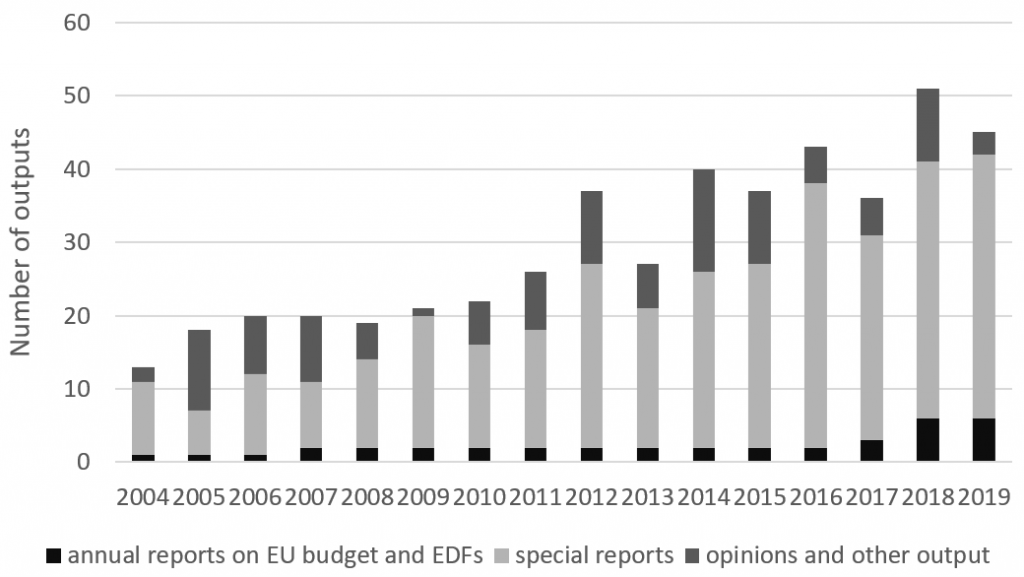 Note: For more information, see the authors’ accompanying paper in the Journal of European Integration. 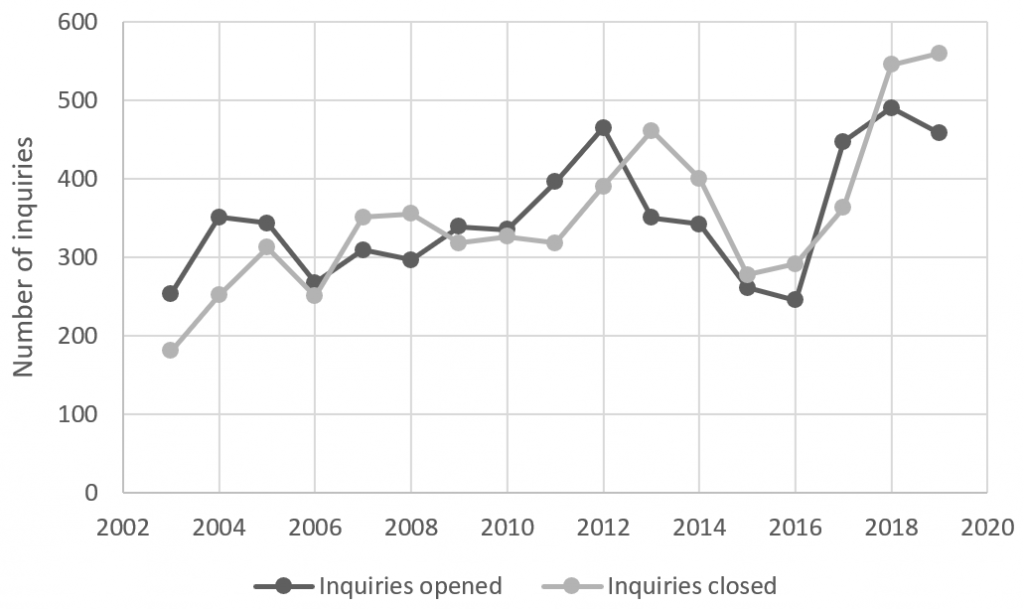 Note: For more information, see the authors’ accompanying paper in the Journal of European Integration.

Third, watchdogs are increasingly expected to become improvement oriented in their work, promoting best practices and institutional learning. As a consequence, watchdogs need to find a balance between their role as independent accountability forums and their new role as agent of change, advocating reforms. With the strong encouragement of the EP, the EO has developed its capacity to be both an effective firewatcher and a fire-preventer. The EO has, for instance, been very active in setting standards ensuring EU bodies guarantee the transparency of the EU’s decision-making process.

The EO’s recommendations are not legally binding and it is not a formal lawmaker. Still, its soft power has a broad reach and it has already shown itself to be able to instigate legal and governance reforms. The emergence of international networks of ombudsmen and audit institutions and the establishment of professional standards, international norms and other soft law regulation, has contributed to their increased improvement orientation. The two watchdogs are progressively acting as quasi-regulators by setting standards for good administrative behaviour and for public financial management and audits.

An important lesson from our study is that besides their formal remit and organisational resources, it is the exercise of these powers that progressively determines the strength and the effectiveness of watchdogs. Their accountability strengths do not necessarily increase by enhancing their formal powers, but rather through a more effective use of the powers they already have. In particular, soft power and smart power strategies play an important role in the contemporary accountability landscape.

For more information, see the authors’ accompanying paper in the Journal of European Integration

Note: This article gives the views of the authors, not the position of EUROPP – European Politics and Policy or the London School of Economics. Featured image credit: European Ombudsman

Anchrit Wille is a Senior Researcher and Lecturer at Leiden University’s Institute of Public Administration.

Mark Bovens is a Professor of Public Administration at the Utrecht University School of Governance.