There is a clear incentive for politicians to manipulate tax and spend policies in advance of an election to help boost their electoral chances. Yet while this phenomenon has been studied extensively at the national level across Europe, there is relatively little evidence of it at the level of local politics. Drawing on a study of Italian municipal elections, Massimiliano Ferraresi demonstrates that both tax policies and spending appear to be tailored to the electoral cycle, with local authorities showing a bias toward less visible tax instruments in the leadup to an election. These findings are particularly important given the role of local actors in implementing the EU’s Covid-19 recovery package.

In a well-known book published in 1936, Harold Lasswell claimed that politics is all about “who gets what, when and how”, suggesting that decisions about the allocation of public goods and services are the essence of politics. This raises a key question about the potential for political manipulation: namely whether politicians, seeking to improve their chances of winning a forthcoming election, deliberately allocate goods and services prior to a vote.

Most studies of this phenomenon are based on cross-country samples of central government budgets. Only a few of these analyses provide causal evidence of the presence of political cycles at the local level because in most countries local elections generally occur at the same time, making it difficult to separate the years of the term effect from other changes in macroeconomic conditions. However, even when it is possible to capture the effect at the local level, systematic evidence of political manipulation of this kind is relatively scant.

Italy provides an excellent opportunity for exploring these issues, for two reasons in particular. First, municipal elections in Italy are generally held every five years but, for historical reasons, Italian cities have staggered election terms and, therefore, it is possible to test whether municipalities’ choice of taxes and expenditure is affected by political manipulation in the leadup to elections.

Second, Italian mayors enjoy discretion in setting local taxes, which are characterised by different degrees of visibility. In particular, the main municipal tax is a property tax, due yearly by real estate owners to the municipality where the property is located and levied on both principal and other dwellings, which is a very visible and salient tax instrument in the hands of the local policymaker.

Conversely, the personal income tax surcharge (PIT), which is the most important national tax, is a tax tool that is neither very transparent, nor visible. To give a flavour of this, according to a survey run by Censis which ranked the taxes most hated by Italians, the local property tax was in third position, while the national income tax was fifth. The PIT surcharge was not even mentioned in this ranking.

Italian municipalities are not allowed to run a deficit. For this reason, any increase in municipal expenditure, typically observed in pre-electoral years, is to be financed by means of transfers and local taxes. As was already alluded to, there are taxes that are highly unpopular and very visible (such as the property tax), while the PIT surcharge is a less visible and less salient way to impose burdens on residents.

It then follows that the political cost incurred by local administrators of leveraging the PIT surcharge for the financing of pre-electoral expenditure hikes is much lower than the cost they would bear by increasing the property tax. Therefore, one would expect the PIT surcharge to increase close to elections and the revenue associated with the property tax and user fees and charges to decrease over the same period.

To explore whether policy outcomes are affected by political manipulation, we collected information on spending and revenue for all Italian municipalities belonging to the ordinary statute between 2001 and 2011. Figure 1 depicts the estimated coefficients of a model in which we use the per capita expenditure as the dependent variable and five dummy variables – one for each year of the term – as regressors. Taking the election year as the baseline, the figure suggests that municipal expenditure increases as elections get close and then drops just after elections, before continuing to rise again. 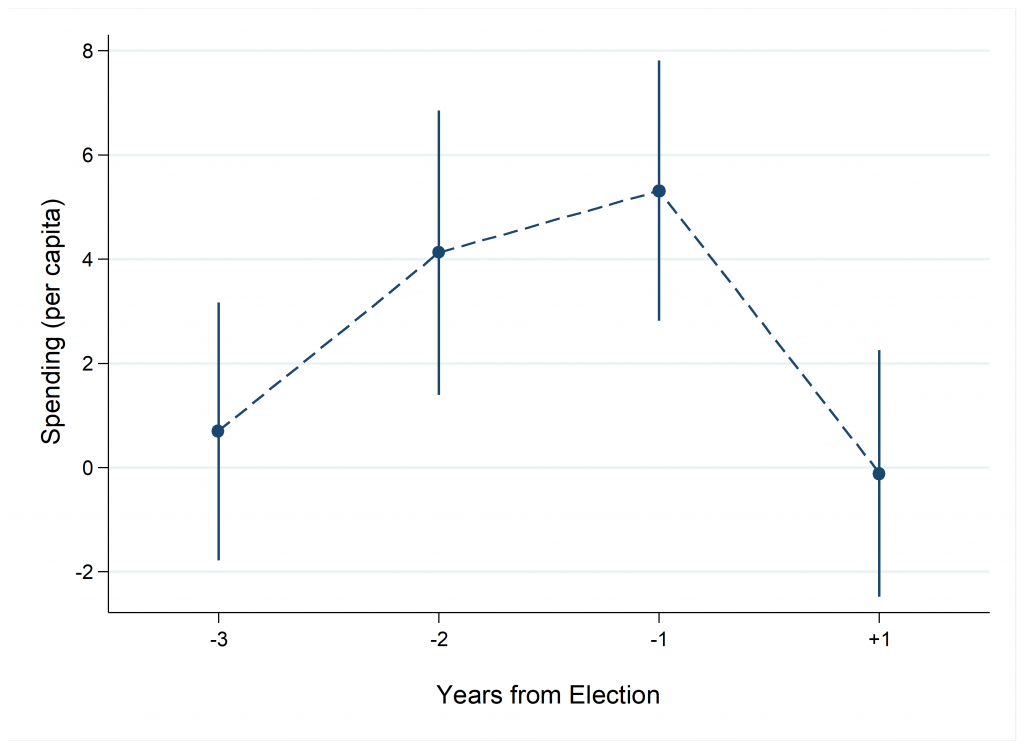 Note: This figure is based on estimates using the per capita municipal expenditure as the dependent variable and four dummy variables indicating each year of the electoral term, controlling for municipal fixed effects and time dummies. Dots represent point estimates taking the election year as the baseline, while lines denote 95% confidence intervals.

Moving to taxes, I replicate the same approach used in Figure 1 by adopting the per capita revenue from the property tax and the per capita revenue form the PIT surcharge as the dependent variable, respectively. According to estimates shown in Figure 2, both salient and non-salient fiscal tools are affected by political manipulation close to elections, but intriguingly, the sign goes in opposite directions. While the revenue of more visible and salient tax instruments such as the property tax significantly decreases just before an election (Panel B), the collection of the personal income tax surcharge (PIT) – a tax tool that is not very transparent – is found to be higher in pre-electoral years as compared to other years of the term (Panel A). 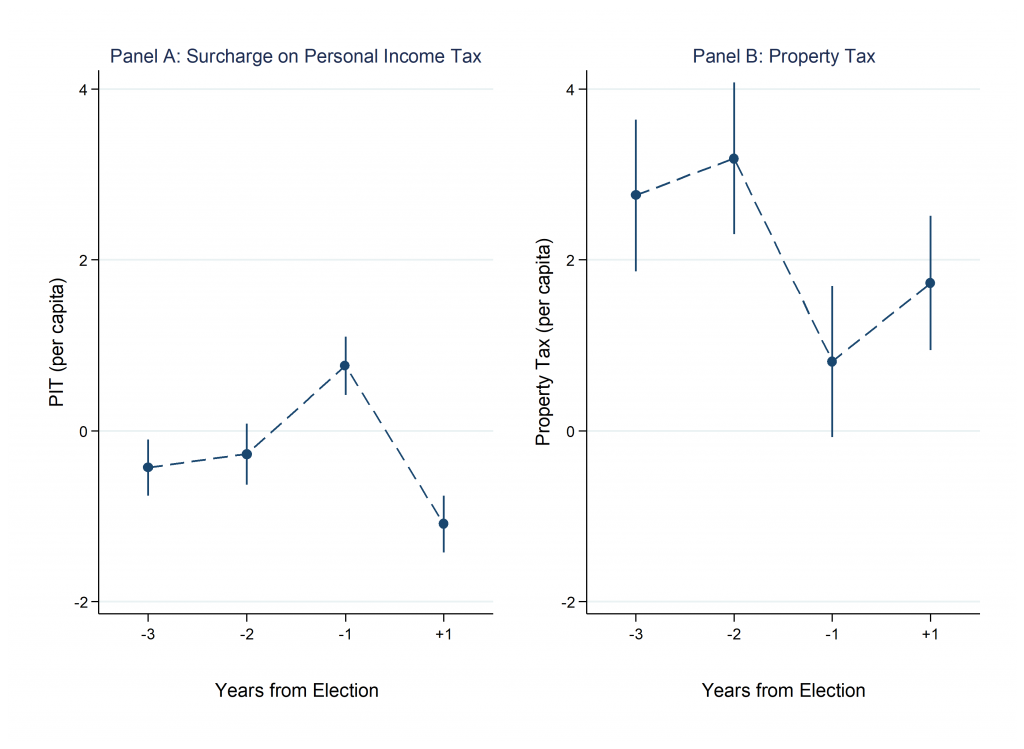 Note: This figure is based on estimates using either the revenue from the PIT surcharge (panel A) or from the property tax per capita (panel B) as the dependent variable and four dummy variables indicating each year of the electoral term, controlling for municipal fixed effects and time dummies. Dots represent point estimates taking the election year as the baseline, while lines denote 95% confidence intervals.

What all these findings suggest is that tax salience and electoral incentives shape fiscal decisions taken at the local level. In practice, politicians strategically rely more on less salient revenue sources as compared to more visible ones during electoral contests to finance expenditures. These findings call for extra attention during the current pandemic, as a large amount of funds linked to the EU’s Recovery and Resilience Facility will be managed by local policymakers. If this political manipulation continues to hold, there might be a risk that the extraordinary amount of money associated with the fund will be channelled into some form of redistributive politics.

Note: The scientific output expressed in this article does not imply a policy position of the European Commission. Neither the European Commission nor any person acting on behalf of the Commission is responsible for the use which might be made of this publication. The article gives the views of the author, not the position of EUROPP – European Politics and Policy or the London School of Economics. Featured image credit: Luca Micheli on Unsplash