There has been substantial political debate over the last decade about the role of experts in policymaking. But how are these trends likely to develop in future? Drawing on a new edited volume, Vigjilenca Abazi, Johan Adriaensen and Thomas Christiansen set out four distinct scenarios concerning the future role of expertise in policymaking within the EU.

The Covid-19 pandemic has once more brought the role of experts in policymaking to the centre of attention. Instead of a general consensus on the importance of science-based decisions during a pandemic, we have witnessed persistent challenges to scientific knowledge, including by top elected officials. In this era of disruptive politics and global transformation, understanding the role of expertise and its future constitutes a key challenge for scholars and practitioners alike.

In a new edited volume, we have brought together contributions that take a closer look at why and how expertise is contested in EU policymaking and in global issues of international trade and climate change. In doing so, we have explored four distinct scenarios concerning the future role of expertise in policymaking.

The first scenario is that recent developments and current problems can be considered as something of a temporary phenomenon that can be expected to correct itself. In this view, the role of expertise in policymaking, and its current contestation, is subject to a pendulum-like motion, most of the time overshooting an ideal steady state, and rarely being in balance.

Even if expertise may have become highly contested in the 2010s, decision-makers and the public, once confronted with the consequences of their disregard for expertise and scientific facts, will re-embrace their earlier reliance on expertise. According to this logic, as the implications of decisions such as Brexit or the effects of the climate crisis become more apparent, the merit of experts and their value to the policy process will be vindicated.

However, this ‘self-correcting’ scenario hinges on an – arguably naïve – assumption that those who have been contesting expertise will acquiesce and acknowledge their error in judgement. Instead, past experience suggests it is more likely they will double down, deflect or change the discussion, rather than go gently into the night.

A second scenario is one of (incremental) reform. Such reforms have been proposed and implemented in the scientific, administrative, and political community. In the scientific community, debates are taking place over the importance of science communication, the use of meta-studies, and efforts to make data and research more transparent. In the political and administrative community there have been reforms to ensure expert groups are more balanced, procedures to procure expertise are made more transparent, and the design of public consultations seek to avoid bias.

Institutional reforms must be followed with more drastic revisions to the role of (social) media in the spreading of ‘fake news’ and the need for greater regulation in this regard. Such reforms can range from practices of fact-checking to the need for proper science reporting, but also the possibilities for introducing tighter regulations on the combatting of misinformation, foreign interference and hate speech on social media.

According to this line of reasoning, the suggestions put forward in the second scenario are too superficial and destined to fail as they do not engage with the wider – structural – problem. Restoring the authority of expertise cannot be attained without a matching political evolution that would help to ‘democratise’ the creation of scientific expertise.

In this vision, experts should be part of the public arena and argue their case, rather than become the only politically acceptable view. The inclusion of wider society in processes of knowledge creation and dissemination should be part of the academic profession, rather than creating boundaries in access and production of knowledge. In line with this third approach, what is needed is not a fine-tuning of research practices but a fundamental change in order to ensure that the classroom becomes a place of redistribution of the epistemic wealth.

Each of these scenarios assumes that there are avenues to reverse the recent contestation of expertise. There is, however, a different, more pessimistic scenario in which these trends continue, and even accelerate, in the future. Experiences with debates about the responses to the Covid-19 pandemic have already illustrated this possibility.

As the past has demonstrated, human history, and indeed European politics, does not follow a particular script towards progress and reason. Developments in the late 2010s created echoes of what had been observed in the 1920s: the rise of populism, the increasing polarisation of politics, the shrinking of the political centre, and the marginalisation of science and expertise in public policymaking. Subsequent developments were horrific: the rise of fascism, global war and the Holocaust.

A broader historical reference might be to the enlightenment – the era which established scientific method, technical expertise and political reason in the mainstream of European public life. Through its embrace of science in the advancement of public goods, the Renaissance brought an end to the Middle Ages during which the scientific achievements of the ancient world had fallen into disregard.

It may be an extreme analogy, but perhaps a sustained and further accelerating contestation of expertise, and the rise of a post-factual world in which this trend is embedded, constitutes not only a threat to liberal democracy but might even herald the end of the enlightenment? After all, the immediate reaction of former European Council President Donald Tusk to the British vote in favour of Brexit was to see this as “the beginning of the end of Western civilisation”.

All of these scenarios, utopian or dystopian as they may be, are long-term visions and thus go beyond the horizon of current developments. For now, decisionmakers, scientists and citizens in the European Union will have to adapt to the reality of a system in which scientific expertise remains both essential and contested in its contribution to public policymaking.

The resultant increase in transparency and accountability required from executives, judges and scientists may help to democratise policymaking in the process. However, such a normative gain comes at a price: the tension between institutional reliance on evidence-based policymaking and populist denial of scientific expertise is bound to create uncertainties, delays, policy-reversals and generally more sub-optimal conditions for policymaking.

For more information, see the authors’ accompanying edited volume, The Contestation of Expertise in the European Union (Palgrave Macmillan, 2021)

Vigjilenca Abazi is an Assistant Professor of European Law in the Faculty of Law at Maastricht University.

Johan Adriaensen is an Assistant Professor in the Faculty of Arts and Social Sciences at Maastricht University. 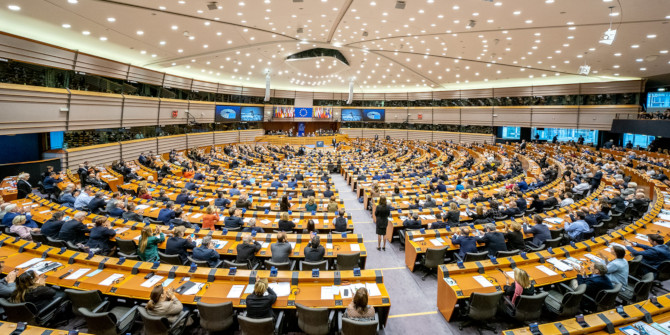