The German Greens have seen their polling numbers decline in the final weeks of campaigning before Germany’s federal election on 26 September. Yet as Charles Lees explains, with the party still in third place, it remains highly likely the Greens could play a major role in the country’s next government.

The German Greens entered 2021 in upbeat political mood. In the last federal election in 2017, the party had confounded low expectations, polling a respectable 8.9 per cent of the vote (up slightly on the 2013 federal election) and winning 67 seats (up four from 2013). The 2017 election still left the Greens as the smallest Fraktion in the Bundestag, but the last four years have seen the party perform well in several state elections and in elections to the European Parliament.

With a week to go until the 2021 federal election, the Greens’ poll numbers indicate they are running in third place behind the centre-left SPD and centre-right CDU/CSU, with support around the mid to high-teens. This level of support is significantly lower than the party’s poll numbers earlier in the year, but given potential areas of political agreement with both the SPD and CDU/CSU, it gives the Greens a very good chance of playing a key role in forming the new German government after the election.

Encouraging signs for the Greens

Figure 1: State election results for the German Greens in the states of the former West Germany (2018-21) 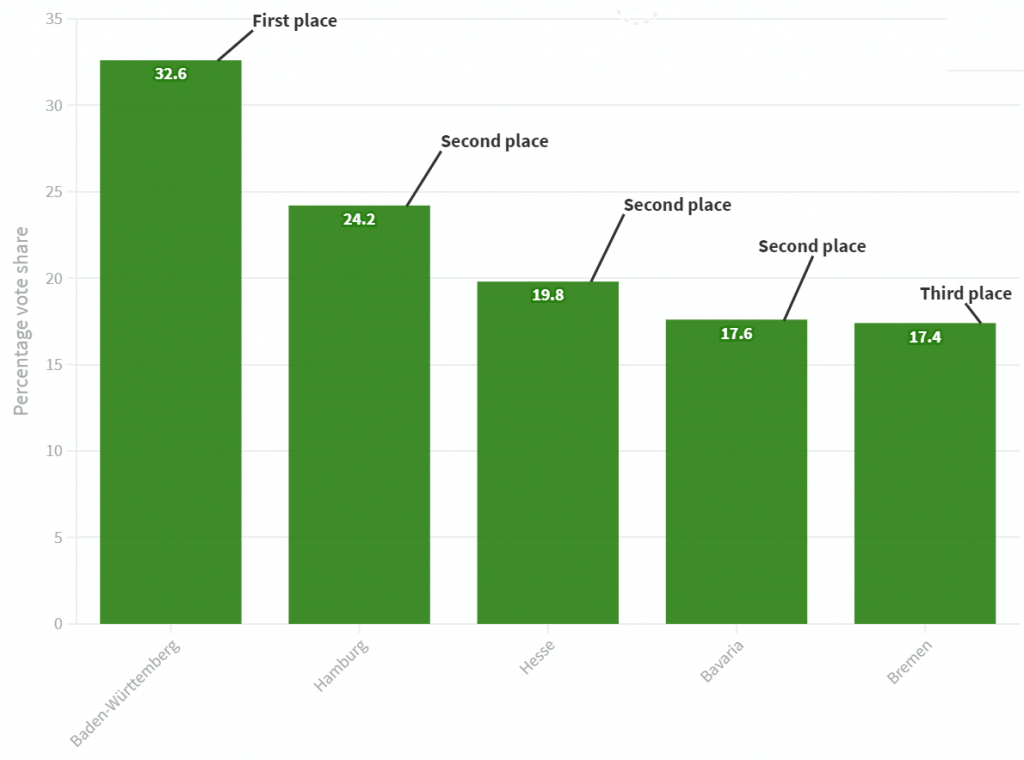 Figure 2: State election results for the German Greens in the states of the former East Germany (2019-21) 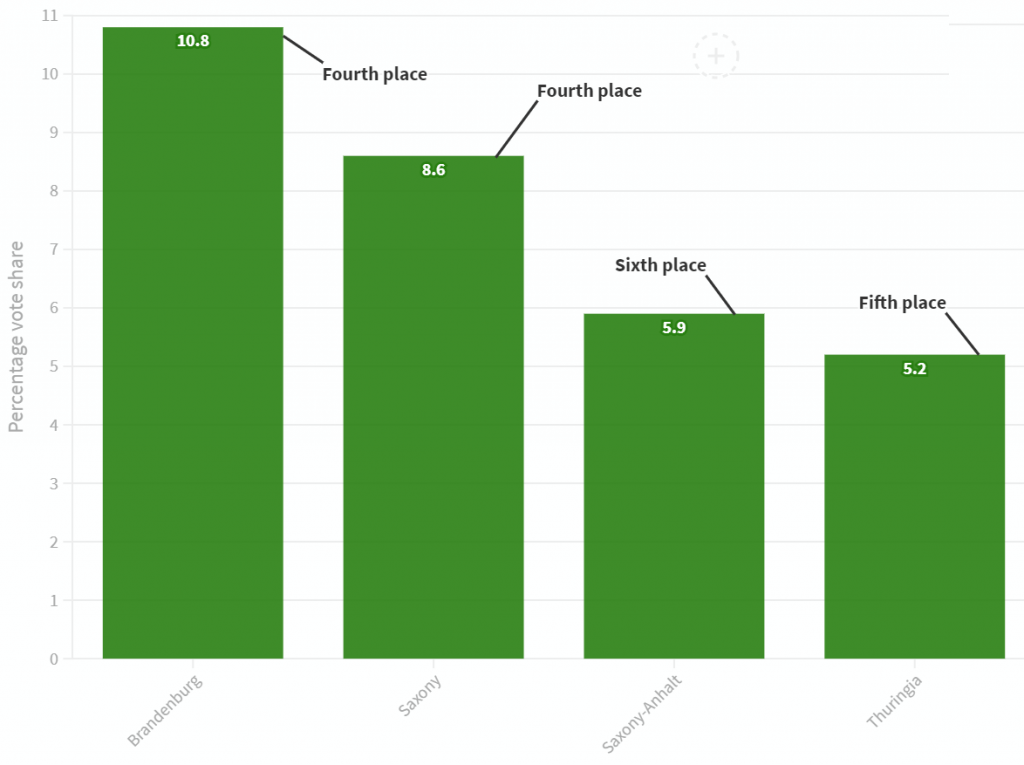 The Greens’ optimism was further enhanced by the initial positive impact of their Chancellor candidate, Annalena Baerbock. Baerbock is a graduate of the London School of Economics and was a political adviser to the Greens before entering the Bundestag in 2013 and becoming co-chair of the party in 2018. Earlier in the year, the Greens were polling at levels close to those of the CDU/CSU, leading to hopes that she might have a realistic chance of becoming Chancellor. As Figure 3 below shows, this hope has subsided, but with the party still in third place, the question remains: are the Greens on the cusp of government? 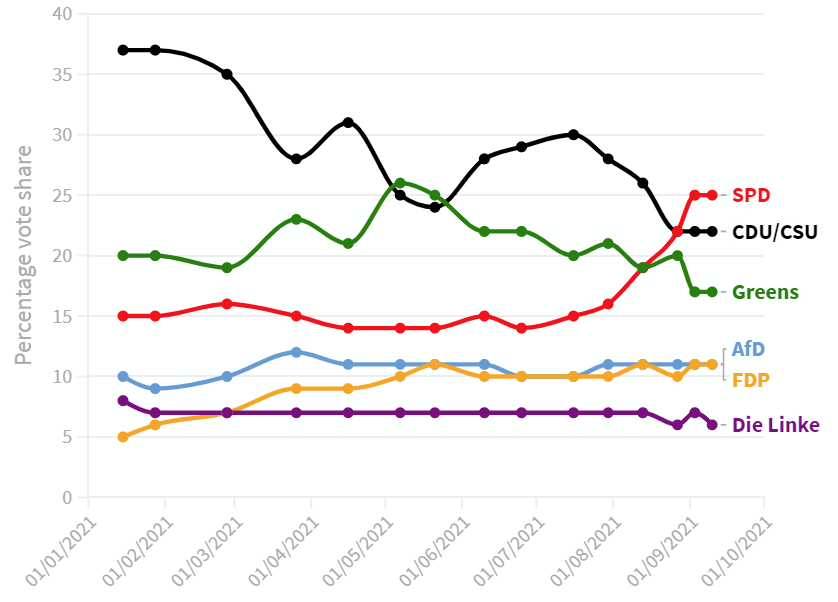 We are still a week out from the federal election, but the polling indicates that the SPD, under its popular Chancellor candidate Olaf Scholz, appears on track to be the largest party in the new Bundestag. Such an outcome would run counter to the long-term trend of a declining SPD vote share that goes back almost twenty years and is considered part of the wider ‘crisis of social democracy’ that we have seen across Europe. It would also give the SPD the first chance to try to form a viable coalition with whatever distribution of parties and seats the election produces.

Coalition studies posit that coalition management becomes more difficult as the number of parties increases and, all things being equal, a two party ‘Grand’, ‘Red-Green’, ‘Black Green’, or ‘Black-Yellow’ coalition is quite a likely outcome of the coalition bargaining process after the elections. This means it is highly possible that the Greens will find themselves back in government.

It remains to be seen how well the Greens perform in the federal election. The party gets most of its support from more affluent socio-economic groups and from voters with more progressive value orientations, including amongst young people. By contrast, the party tends to perform badly with poorer voters and those with a conservative and/or authoritarian value orientation.

But if the Greens were to enter government, it would present a challenge to both the CDU/CSU and the SPD. The Greens have been (slightly cruelly) characterised as ‘a vegetarian subdivision of the Christian Democrats’, which means there is great potential for the CDU/CSU constructing a platform for government with them, but this also means that the Greens and the CDU/CSU have to compete for much of the same electoral base – which complicates coalition management. For the SPD, the Greens have been a reliable coalition partner in the past but there is no guarantee that would be the case in the future and the two parties are not as close culturally as they are ideologically adjacent.

If the Greens enter government, they will try to push back against Germany’s highly transactional approach – pursued by both CDU/CSU and SPD-led governments – to authoritarian states with which it has significant trade links. Annalena Baerbock has argued that Germany needs to take the lead in the European Union against human rights abuses around the world, including those carried out by states that are some of Germany’s largest export markets.

This means inter alia standing up to China over its treatment of its Muslim citizens, and possibly withdrawing support from the controversial Nord Stream 2 pipeline between Germany and Russia. The coming weeks are set to reveal if the Greens will eventually enter government and ensure the party’s aspirations for Germany are achieved.

Charles Lees is a Professor and Dean (People and Resources) in the College of Business, Government, and Law at Flinders University.