It is now almost universally agreed that the impact of climate change will prompt fundamental changes to the global economy, including the financial sector. The financial system can play a crucial role in financing the transition towards a climate-neutral economy, but at the same time it may be prone to climate-related risks that need proper management. In view of the upcoming COP 26 UN meeting and drawing on ECB analytical work, Wouter Coussens, Irene Heemskerk, Wieger Kastelein and Michael Wedow argue that additional tools and ambitious policy reforms are needed to reach both objectives.

The long-term nature of climate risks, the uncertainty about how these risks will manifest over time as well as their mutual interdependence pose a significant challenge. Climate-related risks to the economy and financial sector are usually divided into two categories. Physical risk is the economic impact stemming from the expected increase of natural hazards, both in frequency and magnitude. Transition risk refers to the impact of the potential delayed and abrupt implementation of climate policies to reduce CO2 emissions. There is uncertainty both around the evolution of the climate itself and about future policies to mitigate climate change. The two risks are not isolated but closely interlinked; e.g. while climate policies, especially if abruptly implemented, may pose risks to certain high polluting sectors, they may reduce physical risks over the medium-to-long term.

While the primary responsibility and powers to mitigate climate change lie with governments, central banks also have a role to play. Central banks could contribute to avoid so called ‘green swan’ risks, i.e. potentially extremely disruptive financial events triggered by climate-related risks that could trigger a financial crisis. To achieve this objective, a better understanding of climate-related risks is essential, accompanied by dedicated analyses to quantify the potential impacts of climate mitigation policies on the overall economy. At the same time, given the key role of the financial sector to mobilise funds towards more sustainable investments, central banks can play a supporting role to transitioning towards a greener economy.

In order to shed light on the risks for the financial system, the European Central Bank (ECB) conducted an economy-wide climate stress test that models climate risks over the coming decades. A stress test is a tool that investigates how banks would be affected under severe but plausible future economic scenarios. The ECB economy-wide climate stress test pushes out the analytical frontier by extending the time horizon to thirty years, by considering both transition and physical risks in the definition of the future economic scenarios, and by using very granular data. It covers approximately four million companies worldwide and 1,600 consolidated banking groups in the euro area.

The results show that euro area firms and banks could be severely affected in a scenario where climate change is not addressed (see Figure 1). In 2050, the average corporate loan portfolio of a euro area bank is almost 8% more likely to default under the hot house world scenario than under an orderly transition scenario. Additionally, banks most vulnerable to climate risk are 30% more likely to default in 2050 compared with 2020 under the hot house world scenario: this increase is about five times larger than the increase of an average bank under the same scenario. 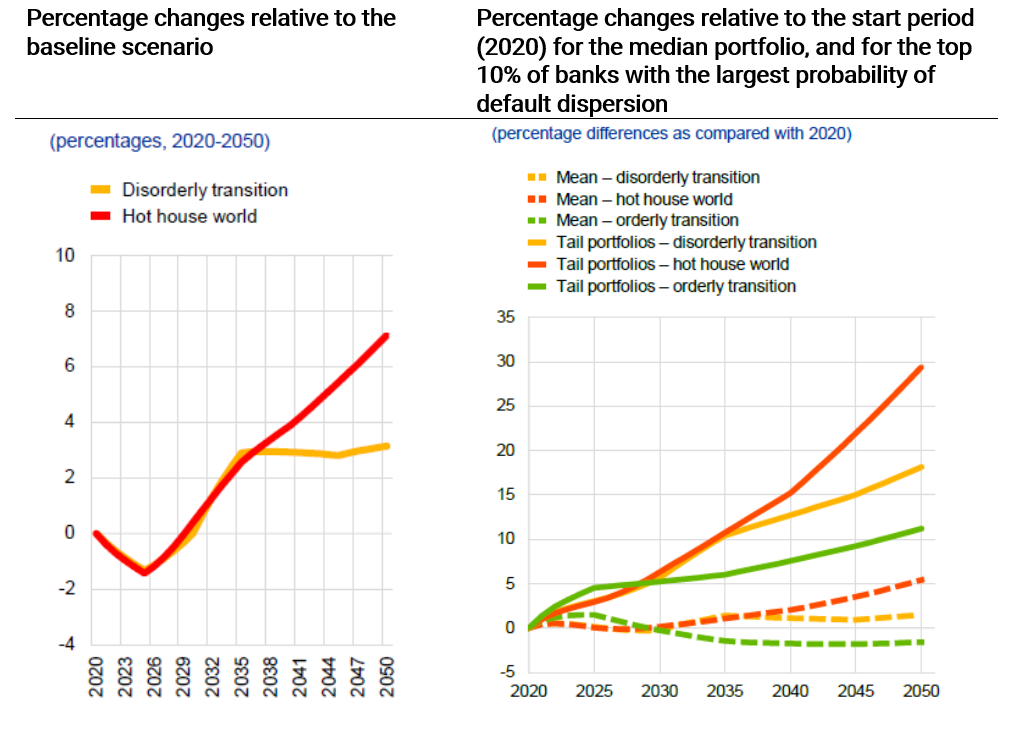 The results also reveal that climate risks are concentrated in certain regions and sectors. Some 70% of loan exposures of euro area banks is subject to future physical hazards and is concentrated in the hands of only 25 banks. Worryingly, those physical risk exposures are skewed towards weakly capitalised and less profitable banks in the euro area. In the absence of prudential policies that duly account for climate risks, this could lead to excessive risk-taking by banks and financial institutions in general.

The unique features and the systemic dimensions of climate-related risks may require the application of macroprudential policies as well as new stress testing approaches that recognise the macro-financial nature of climate risks. These tools should be complementary to banks’ own risk management and direct supervision and could be well suited to deal with some specific features of climate risks such as common exposures and portfolio correlations, spill-over effects, as well as second round effects on the real economy.

The existing macroprudential tools may already be able to play an important role. Dedicated buffer requirements and risk weight policies for exposures to climate risk could increase institutions’ resilience. In particular, the sectoral systemic risk buffer could be useful as it would allow for a targeted build-up of resilience against identified risks and could thus account for the concentrated nature of these risks.

That said, the transition to a greener economy is not only about managing risks but also represents an opportunity of economic growth that the financial sector should contribute to. As shown in the ECB economy-wide climate stress-test, the advantages of acting early outweigh the initial costs over the medium to longer term, also as a result of energy efficiency gains for firms and cheaper energy prices overall.

EU policymakers have already initiated various instruments and initiatives to ‘green’ the financial sector, such as the EU Taxonomy which is the backbone of the sustainable finance strategy. The EU has set ambitious new carbon emission targets which aim to reduce emissions by at least 55% by 2030. The EU taxonomy contributes to this goal by providing a common use of language and a clear definition of what constitutes a sustainable activity. Although several green taxonomies are being developed globally, the EU is the first to implement it in financial regulation.

The share of investments currently financing economic activities aligned with the EU Taxonomy is estimated at 1.3%. Still the increased financial investment needed in relevant sectors appears to be feasible. Several policy actions are being implemented, which will make it easier for market participants to channel their investments to taxonomy-aligned activities. One example is the work on well-integrated and deep capital markets which act as a catalyst and as a complement to financing from banks and governments.

Bringing forward the Capital Markets Union (CMU) is necessary to further develop green markets. The CMU should be strengthened by increased standardisation, enhanced supervisory convergence, improved supervision as well as further action to harmonise insolvency laws and investor protection rules. This could benefit several green market segments. The European Commission’s proposal of a green bond standard built on the EU Taxonomy is a case in point, providing more assurance to investors.

In the Chinese language the word “crisis” is written with two symbols, the first meaning “danger” and the second meaning “opportunity”. Faced with the current climate crisis and inspired by the Chinese language, we should be mindful of the dangers that climate risk can bring, and at the same time be ambitious to realise the opportunities that green finance can bring to our economies. This would be our key message for the upcoming COP 26 UN meeting in Glasgow which will be a critical moment for the global community.

Note: This article gives the views of the authors, not the position of EUROPP – European Politics and Policy or the London School of Economics. Featured image credit: Gustavo Quepón on Unsplash

Wouter Coussens is Adviser at the Supervisory Policy Division in ECB Banking Supervision. Previously, he worked in various departments at the ECB, as well as the European Council and the European Commission. He holds a master’s degree from LSE.

Irene Heemskerk joined the ECB in June 2021 to head the Climate Change Centre at the European Central Bank. She is responsible for shaping and steering the ECB’s climate agenda internally and externally. Irene holds a master’s degree in international and European law from Leiden University. 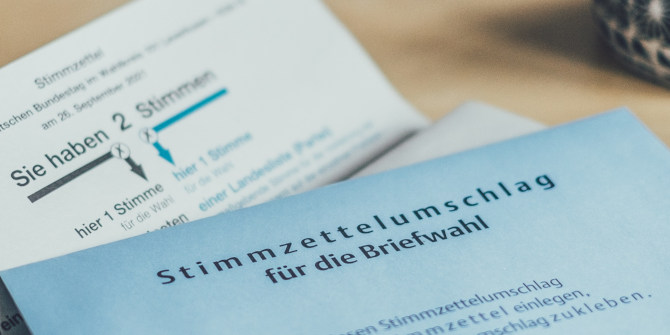