Much of the debate about the Spanish economy in recent decades has focused on problems such as persistent unemployment. Drawing on a new book, Oscar Calvo-Gonzalez argues that setting these failures to one side and taking a fresh look at the country’s economic successes can provide some surprising insights.

“What is Spain’s main export?” The question was meant as small talk, addressed to Spain’s Prime Minister José María Aznar by one of President George W. Bush’s closest advisors while the two waited for the US President to join the meeting. Aznar responded in his trademark terse way, “Cars.” Assuming to have been misunderstood, the American went on, “No, I am asking about the number one product that Spain sells abroad.” To which Aznar insisted, “Cars.” Baffled, the American tried once more: “No, no, what I want to know is which Spanish product sells most successfully abroad,” and Aznar simply repeated, “Yes, cars, cars.”

Spain is not only a large exporter of cars but one of a handful of economies that have successfully transitioned from middle- to high-income in recent decades. Of over a hundred middle-income economies in 1960 only a dozen had become high-income by the end of the twentieth century. The finding that transitions into high-income status were relatively rare led economists Indermit Gill and Homi Kharas to coin the phrase ‘middle income trap.’

It was a way to focus attention not just on this stylised fact but, more importantly, on the absence of a satisfactory framework to help policy makers in their efforts to graduate from middle- to high-income. A voluminous literature has ensued, often addressing whether this can be considered a ‘trap’ or not. Regardless, the number of countries that have transitioned to high-income remains small. And the attention of development practitioners tends to focus on an even fewer number of successes – like South Korea. Some of the economic failings of Spain are so well-known, particularly the stubbornly high unemployment rate, that it is rare for observers to implicitly associate Spain with economic success.

Worse still, the experience of Spain’s rise to high-income status is often misunderstood. Spain’s economic development in recent decades is seen by many as something close to inevitable. Above all, the standard account goes, Spain’s European neighbours were rich and eager to help. While the country may have hit rock bottom after its Civil War in the 1930s, the standard account continues, it was bound to bounce back. I will return to the role of Europe below, but first let me briefly present the puzzle.

By 1950 Spain’s per capita GDP had been diverging from the leading economies for a century and a half. Both external and internal commentators despaired at the hopeless politics, repeated cycles of violence, corrupt practices, or the incompetence of the authorities. Yet in the following thirty years Spain would catch up around 30 percentage points in per capita GDP with respect to the US, which itself was undergoing a golden age of growth. True, the external context was favourable at the time, but the country had previously failed to capitalise on other occasions of good external conditions.

Even more damning for the view that sees Spain’s catching up as largely the result of a bounce back is the fact that the sources of growth changed, with a significant increase in the contribution of productivity growth. In addition, the frequency with which the economy was shrinking, as opposed to growing, was also sharply reduced. Both these factors suggest a qualitatively different foundation for growth in the decades after 1950. And the success extended to social aspects. In fact, on many human development indicators the catching up of Spain with the leading countries was more complete than in terms of output. Progress on social measures was also no bounce back. Spain might have been a military power in the early modern period, but its literacy rate lagged that of Britain by around two centuries well into the nineteenth century.

The economic rise of Spain as a high-income country has been largely overlooked and often misunderstood. The payoff from taking a fresh look at Spain’s economic development is high.

This story is little known because much of the existing literature on Spain’s economic development has been concerned with documenting the shortcomings of economic policies or institutions that prevented a more complete catching up. And, looking back, the list of suboptimal policies was not short, including high tariff protection, excessive regulations, insufficient public revenue collection, limited support for innovation, and inefficient public spending, among others. But by focusing on the glass being half empty, we risk overlooking how despite all those shortcomings the glass got half-filled.

Shifting this perspective changes the questions and insights about Spain’s economic trajectory. Some lessons are well-known. Without first controlling political violence and ensuring political stability – a by-product of the Cold War – the take off would have been unlikely and unsustainable. Spain benefited from getting macroeconomic policies right, or more precisely from correcting bad macroeconomic policies. It also benefited greatly from an increased openness – especially to foreign direct investment – which was one of several pathways towards greater market discipline.

But other insights are not what one may expect. The initial set of economic reforms, often seen as being adopted as last resort measures in times of crisis, can be better explained in Spain as a result of political stability than as driven by economic instability. Later reforms, often derided as lacking in ambition, can be thought of as ‘policy tinkering’ that on balance led to greater contestability. Often in intriguing ways.

Cars, to return to the story with which we started this blog, provide a good illustration of this. In the 1950s the domestic car industry was composed of a state-owned enterprise and a subsidiary of Renault that was required to have a local partner – who happened to be the brother of the dictator. Imports of cars were subject to high tariffs and, unsurprisingly, much corruption. Not the most auspicious beginnings. And yet the car industry that would develop in Spain did so not despite protection and regulation but because of them.

Local content rules were put in place and enforced; crucially, local suppliers were made to compete. Foreign companies set up plants, and brought technology, in part attracted by the highly protected domestic market. But protection was coupled with competition in particular ways. For example, a new Ford plant was allowed on condition it would export at least two thirds of its output. This created the right incentives for both a competitive operation and one that created linkages domestically. In relative short order, a competitive marketplace of suppliers of car parts developed.

And what about Europe? Access to European markets proved important for openness to yield the results it did but the path to prosperity depended on many institutional developments that took place well before EU membership. Above all, the idea of Europeanising Spain helped create a political and social consensus that proved critical.

The economic rise of Spain as a high-income country has been largely overlooked and often misunderstood. The payoff from taking a fresh look at Spain’s economic development is high. While every country’s path is unique, this updated view of the country’s trajectory is a useful case study of how development actually happens without perfect institutions and despite unpromising initial conditions.

For more information, see the author’s new book, Unexpected Prosperity: How Spain Escaped the Middle Income Trap, which will be published by Oxford University Press on 23 October

Note: This article gives the views of the author, not the position of EUROPP – European Politics and Policy or the London School of Economics. Featured image credit: Jorge Fernández Salas on Unsplash

Oscar Calvo-Gonzalez is Director at the World Bank and Adjunct Professor at Georgetown University’s Walsh School of Foreign Service. The findings, interpretations, and conclusions expressed in this blog are those of the author and should not be attributed in any manner to The World Bank, its Board of Executive Directors, or the governments they represent. 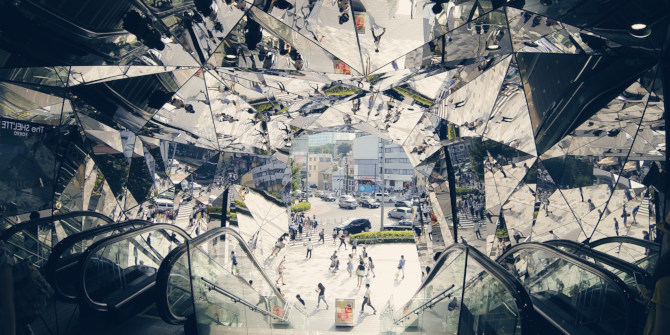