The European Commission announced a new ‘Green Deal’ at the end of 2019, just months before the start of the Covid-19 pandemic. Sandra Eckert argues that while the pandemic might have been expected to derail the EU’s agenda, the Green Deal has benefited from successful attempts to frame Europe’s green transition as a necessary precondition for economic recovery. She takes a more cautious approach, however, with respect to challenges ahead for the EU’s regulatory power in the global green transition.

When European Commission President Ursula von der Leyen announced the EU’s Green Deal, she called it “Europe’s ‘man on the moon’ moment”. Signalling an ambition of similar magnitude, Commission Vice-President Frans Timmermans presented it as the “answer to the millions of citizens who demand action on the climate and our proposed roadmap to make Europe the first climate-neutral bloc in the world by 2050”.

The Green Deal is considered to be the cornerstone of the European Commission’s policy to manage the energy transition. It has attracted considerable attention in policy and academic debates. It sets out the EU’s ambition to be a global leader and frontrunner when it comes to addressing climate change as one of the key challenges facing present and future generations. Its scope may cause yet another manifestation of the so-called ‘Brussels effect’, a term used to describe the export of rules outside the European Union.

The Covid-19 pandemic and the economic crisis it triggered has been a first test for the robustness of the Green Deal agenda. In a recent study, I argue that these crises have strengthened the Green Deal agenda through effective issue linkage with economic recovery, framing the green transition as a necessary precondition for Europe to thrive economically. At this stage, it is difficult to draw conclusions about the EU’s external regulatory power in the global green transition. The jury is still out as to whether the EU will live up to its global leadership claim, both as a result of the difficult geopolitical environment, but also because it faces competition in setting the rules globally.

With the European Green Deal, the EU seeks to spur European-wide and eventually worldwide norm diffusion and in doing so cultivate what in the literature has been dubbed ‘normative power’. The relevant norms are environmental – climate neutrality, zero pollution and a circular economy – but also social, given that a ‘just transition’ both inside the EU and globally is a declared goal of the Green Deal.

Effects of scale come in when the application of rules in the single market enables the EU to externalise its policies. In my view, the concept of regulatory power is more important than the notion of market power here: being a big market does not suffice to set standards globally. If the EU wants to claim to be a leader beyond its remits, the capacity to formulate and enforce rules is required. These rules need to prove their effectiveness in terms of outcomes in order to win the game of global regulatory competition.

An insightful illustration is the ongoing policy debate on and implementation of the EU’s Green Taxonomy, which the EU claims is the “world’s first-ever ‘green list’ – a classification system for sustainable economic activities, or taxonomy”. The adoption of delegated and implementing acts has been mired in controversy and has seen many delays. Whether the final output once implemented drives change effectively remains an unanswered question at this stage. The extent to which the EU can credibly lead by example also hinges on its capacity to embrace objectives that go beyond its immediate interests. Geopolitics may hence complicate matters further.

A geopolitical orientation involves the protection rather than the diffusion of norms, and aims at realising domestic economic interests. Operating in an international context where norms of multilateralism and liberalism are under pressure, the Commission President herself has declared that her Commission is “geopolitical” in nature. Taking a closer look, one can identify geopolitical characteristics in the EU’s Green Deal agenda, which in many ways is an EU-centred industrial and growth strategy that aims to protect European values and domestic industry.

The Commission’s intention to introduce a Carbon Border Adjustment Mechanism to compensate European companies for the increased cost of carbon is a prime example. The proposal has fuelled criticism and allegations of protectionism by the EU’s major trading partners such as China and the United States. Such controversy negatively affects norm diffusion and regulatory export by the EU.

Setting the agenda in the midst of a crisis

European Green Deal agenda setting and policy formulation has been overshadowed by the Covid-19 pandemic. Even though the realisation of environmental policy goals could easily have been shelved as a result of addressing the pressing need to deal with economic hardship resulting from the crisis, it appears that this has not been the case. My research shows that the advocates of the Green Deal policy agenda successfully engaged in issue linkage between the green transition and economic recovery, arguing that a successful European economic recovery must be a sustainable one.

The European Commission managed to put forward its green policy proposals almost according to schedule, and the European Parliament and most national governments backed the goal of a green recovery. Attempts to disrupt the Green Deal agenda failed. These were brought forward by certain member states such as Poland, the Czech Republic and Hungary; but also by business sectors such as car manufacturers and the plastics industry, as well as umbrella organisations such as BusinessEurope. Overall, therefore, the Covid-19 pandemic contributed to the upward momentum of the ambitious policy agenda. Additional funding generated in the context of economic recovery has even strengthened the European Green Deal rationale and has added a fiscal layer and conditionality to regulatory policy.

The European Green Deal has yet to live up to its promises. This holds true for its implementation in the EU, and even more so for its global ambitions. The current economic and geopolitical context complicates the realisation of the ‘just transition’ envisaged by the EU. The substantial increase in energy prices, caused by the energy transition, but also shortages of gas supply, is adding to societal costs and negatively affecting the economic recovery, as is the current upward trend of inflation. The promise of “making sure no one is left behind”, if not achieved, could ultimately backfire: if the EU fails to deliver what it promises, this will invite criticism and could fuel public contestation in the member states.

Moreover, many of the policy proposals still need to be fully adopted and implemented, including key components such as the Green Taxonomy and the Fit for 55 package, which aims to reduce emissions by at least 55% by 2030. The EU’s ambition to lead global climate and environmental policy therefore faces sizeable obstacles.

By making a binding commitment to carbon neutrality and seeking to mainstream climate considerations into a range of policy areas including the financial sector, the Green Deal has tremendous innovative potential, and could set the scene globally. Yet besides the unanswered question as to whether the Green Deal will deliver what it promises within the EU’s borders, geopolitical realities and competition with other global rule-setters such as China or the US might severely limit its external potential.

For more information, see the author’s accompanying paper in the Journal of Common Market Studies

Note: This article gives the views of the author, not the position of EUROPP – European Politics and Policy or the London School of Economics. Featured image credit: Thomas Richter on Unsplash

Sandra Eckert is a Marie Skłodowska-Curie COFUND Fellow and Associate Professor at the Aarhus Institute of Advanced Studies (AIAS) in Denmark. 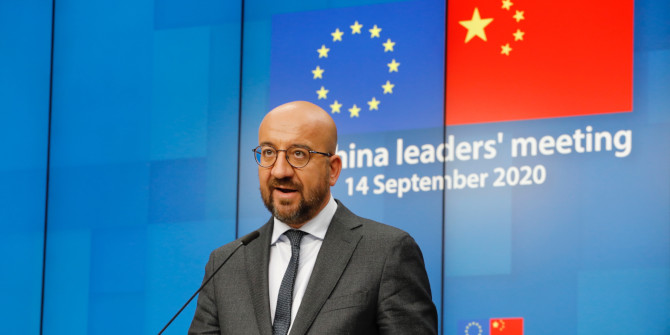