Many of the states that surround the Mediterranean have experienced intense periods of instability in the last two decades. This instability, coupled with the importance of the region for global trade, have made it a central focus of international politics. Riccardo Redaelli argues that in light of the changing geopolitical importance of the Mediterranean, it is time for Europe to develop a new strategy for engaging with states in the region.

Perhaps surprisingly, with the new century, the Mediterranean basin has gained a sort of ‘new centrality’ within global international dynamics, after a prolonged period of perceived marginality. However, this centrality has often been the result of political and military crises and proxy wars among competing powers rather than a coherent attempt by regional and international actors to refocus strategically on the area. In other words, the Mediterranean has experienced a ‘negative’ and unintended increase in geopolitical importance.

Indeed, all along the basin, there have been multiple centrifugal forces at play that have undermined its state structures, in particular (but not exclusively) along the southern shore. During the last two decades, the explosion of particularly violent civil wars in Iraq, Syria, Yemen, and Libya, the increase in tensions following the disappointing results of the Arab uprisings of 2011-12, the rise in the role and visibility of competing non-state jihadist movements, the return of Russian activism, and a violent polarisation between Shiites and Sunnis have further destabilised the wider Middle East.

In addition, European citizens have been induced to obsessively focus on the problem of migrants moving from the African continent or from the hotspots of crisis: a factor that has deeply influenced European domestic politics and the European vision towards the Mediterranean. All these factors have contributed to a marked destabilisation of the security matrix of the Middle Eastern region, thereby enhancing the greater geopolitical entropy of the globalisation process and triggering a noticeable redistribution of power within a changing international system.

The most evident result has been a marked unravelling of the balances, perhaps precarious, that existed in the various Mediterranean sub-regions. At the same time, the perception of the Mediterranean as an ‘American lake’, which had been in place since the 1960s, came to an end. The basin has once again become ‘challengeable’ due to the perceived decline of US power (or at least a decline of its interest in the region), which has encouraged bolder initiatives by regional or external actors.

All of these conflicts and crises have in their own way hidden the evolving economic and commercial trends within the basin, such as the Mediterranean’s role in global trade or the creation of new commercial corridors (such as China’s Belt and Road Initiative) which have given the region a new centrality in geoeconomic and maritime economy perspectives.

In fact, this sea, despite accounting for only one percent of the world’s oceans, generates around 15% of global maritime traffic and 20% of related economic value, which makes it a fundamental global socio/economic crossroads. Even from an energy perspective, the basin is playing a more significant role thanks to the discovery of giant natural gas fields in the Eastern Mediterranean. For instance, the United States Geological Survey has estimated that the Levant Basin contains around 122 trillion cubic feet of technically recoverable gas.

Europe has effectively tried to withdraw from the Mediterranean, giving up on the creation of a holistic political strategy for the region, despite its crucial importance.

The lack of European determination and weakness in its foreign policy has worsened Mediterranean instability. European divergences in political priorities and in the perception of challenges within the enlarged borders of the Union, allied with the economic crises of the last decade and the effects of the pandemic, have weakened any attempt to consistently articulate a European regional security project.

This has given rise to national logics that have exposed the EU to diverging policies, unilateral initiatives, and to a slowing of the traditional focus on engagement and support launched soon after the end of the Cold War with the so called Barcelona Process. Europe has effectively tried to withdraw from the Mediterranean, giving up on the creation of a holistic political strategy for the region, despite its crucial importance. This has been a strategic mistake and a failure, well beyond the political sphere, which threatens the capacity of Europeans to adapt to the seismic changes and redistributions of power that are affecting the international system.

This attitude is all the more surprising because the Mediterranean has historically been regarded by Europeans as a ‘liminal’ space – despite the tensions and differences that exist at all levels in Mediterranean states. It has only been relatively recently that Europe’s perception of the Mediterranean basin as a ‘barrier’ has become entrenched, largely as a result of the traumatic events that have hit it since the turn of the century.

At the end of the George W. Bush administration, the United States tried to disentangle itself from the chaos of the Middle East. In a famous book, Kenneth M. Pollack summed up this political aspiration as a ‘path out of the desert’. However, despite this aspiration, the US remains inextricably involved in the Middle East’s crises. The same holds true for Europe and the Mediterranean basin. Indeed, the situation is even more hazardous for Europe due to its proximity.

Paradoxically, this approach is marginalising the Euro-Mediterranean dimension of the basin itself. We are transitioning toward a global but more fragmented reality, where regional single-state actors interact with non-state ones, proxies, and external powers, without any effective multilateral framework.

Despite its geography, the Mediterranean from a geopolitical and geoeconomic perspective is being transformed into a ‘global sea’. This global dimension has created new geopolitical spaces for emerging or returning powers, either from the region or outside it. However, these actors – including Turkey, Russia and several Arab states – lack any coherent vision of the Mediterranean as a security system, with the basin tending to be viewed as a mere chessboard for their activities.

For better or worse, the Mediterranean is now fully entangled in global history. This is something that Europe is obliged to recognise as it seeks to engage with the states in its neighbourhood. Given the Mediterranean’s new centrality in international politics, there is a clear need for Europe to adopt a long-term strategy that is capable of addressing the continued imbalances and instability present in the region. Indeed, the only rational answer to seismic, epochal changes is to adapt to them, not to ignore them.

For more information, see the author’s new edited volume (co-edited with Francesca Maria Corrao), States, Actors and Geopolitical Drivers in the Mediterranean: Perspectives on the New Centrality of a Changing Region (Palgrave Macmillan, 2021)

Note: This article gives the views of the author, not the position of EUROPP – European Politics and Policy or the London School of Economics. Featured image credit: Vicko Mozara on Unsplash

Riccardo Redaelli is Director of the Center for Research on the Southern System and the Wider Mediterranean (CRiSSMA) and Director of the Master in Middle Eastern Studies (MIMES) of the Catholic University of Milan, Italy. 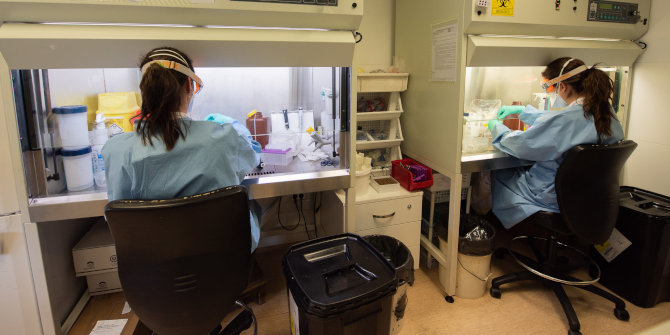