The Future of the Faith Reviewed

The Future of the Faith Reviewed

David Shaw, a Postgraduate Student of LSE, reviews a dialogue between Charles Taylor and Craig Calhoun on The Future of Faith, chaired by Rev James Walters.

Charles Taylor is a world renowned thinker and prolific writer on the philosophy and sociology of religion, and so it was no surprise that the Faith Centre was completely full for this event which saw him in conversation with LSE Director Craig Calhoun, who has also published on the subject of secularism.

The discussion was moderated

by Rev James Walters, the Centre’s Chaplain, who opened proceedings by noting that in LSE’s 120-year history, it was only in the past few years that the Faith Centre was established, and asking Taylor what he thought that fact suggested about the place of faith today. He responded that we live in an era in which, rather than being organised around any single faith, individuals and communities pursue, or constantly seek, their own directions. Much of the remaining conversation revolved around defining, categorising, and explaining this condition, and around the questions that he associated with this state of affairs: what kind of coexistence does a diverse world demand, and what new ways of living does it stimulate?

The historical dimension of the discussion revolved around the process of secularisation and the changes to the way that we think about religion in modernity. During Christendom, there was one religious truth to which the whole society belonged, and even after the Reformation, Taylor said, the struggle was to find and assert a single truth for all. In our situation, there is no such automatic belonging, but to become, or remain, say, Catholic, you have to think innovatively for yourself to work out whether and in 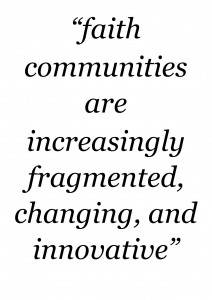 what shape you want to belong.

A key part of Taylor’s analysis was that the fear of decline of institutional religion has led to internal conflicts, in which conservative or fundamentalist factions present a particular – and normally austere and authoritarian – version of the faith as the only legitimate one. In the context of Islam he argued that worst thing that “we” in the West can do is to buy into that “narrowing” narrative and associate Islam only with its conservative iterations. In fact, faith communities have always been diverse, but are increasingly fragmented, changing, and innovative. By viewing religion simplistically, and excluding it from public discourse, he added, we lose a richness of language and the vocabulary of searching and seeking that pervades contemporary religious communities.

There is no doubt that Taylor’s analysis was embedded in a Western perspective, and his references to Christendom, established churches, and varieties of secularism, lent his approach a Eurocentric flavour. But within those parameters, he proved himself to be an incisive and engaging thinker, and provides a wealth of lines of inquiry and discussion around faith and the modern world.

If you missed the dialogue, you can hear it here.

The Promise of Religion