Many forms of artistic expression have stemmed and taken inspiration from favela culture. In this post, Simone Kalkman introduces Morrinho, a grassroots NGO based in Rio de Janeiro, to argue that the distinctiveness of this venture lies in its giving voice to favela dwellers, and in effectively showing that these voices should be taken seriously.

We portray the favela by making art, trying to show what a favela is and what it doesn’t have yet. When you are creating, it becomes your own world. So you do what you want. It is a place of reflection on the favela but also on ourselves.

We hear Nelcirlan Souza de Oliveira, founder of Morrinho (literally translated as little hill), a 350 square feet miniature favela model in the Pereira da Silva neighbourhood of Rio de Janeiro. In 1997, he started using bricks and recycled materials to make miniature reproductions of the houses in his community. Seventeen years on, the project has been part of prestigious international art events (including the 2007 Venice Biennial) and has become an official NGO.

The combination of visual art and favelas is by no means new. Major Brazilian artists such as Tarsila do Amaral and Helio Oiticica have been inspired by favelas. More recently, the international “hype” surrounding favelas has triggered both Brazilian and international artists to do projects in these neighbourhoods that combine artistic and social goals (e.g. Vik Muniz, JR, Jeroen Koolhaas and Dre Urhahn as Favela Painting). In a different but related development, various NGOs are now employing artistic techniques such as photography to give residents a means of self-representation amidst the variety of favela representations circulating the world (e.g. Olhares do Morro). What makes Morrinho stand out, however, are its grassroots origins combined with its current position in the (global) world of so-called ‘high art’.

The Morrinho Project has four ‘branches’:
1. TV Morrinho: producing short films and documentaries in and about the model.
2. Exposição Morrinho: making reproductions of the model in both local and international exhibitions.
3. Turismo no Morrinho: guiding tourists through the original model and its community Pereira da Silva.
4. Morrinho Social: organizing temporary social projects (often in collaboration with other NGOs.

As such, the project facilitates a two-way crossing of the borders of Rio’s so-called ‘broken city’. Tourists visit the favela, guided by its artists rather than by foreign tour agents, and focusing on these youngsters’ achievements rather than on their poverty. Morrinho’s participants not only travel the world, but also participate in prestigious artistic events in Rio itself, which – considering the stigma favela residents still bear in the city – might be even more significant. In exhibitions and film festivals, they bring the favela to the art world, not just symbolically but also literally by their own presence.

In this context, the project’s participants, especially its founder Nelcirlan, occupy an interesting position. Valued as artists and social workers, but still (in other situations) discriminated as favela residents, they are continuously shifting roles and actively reflecting on this process. From this position, they provide us with a highly original and creative representation of their neighbourhood and of favelas in general. They incorporate common stereotypes, turn them around and upside-down, mix them with fictive elements, and do so in a highly humorous manner. Morrinho’s favela models make us aware of how we see the favela – often through prejudice and stereotypes – and show us how we might see it without these preconceived ideas.

To realise exactly how unique this is, at least in the domain of visual art, a short comparison with other social and artistic projects in Rio’s favelas is relevant. Looking firstly at ‘outside’ artists working in favelas, we clearly see a distinction. For while these artists raise awareness of both the favela’s problems and its qualities and strengths, often by collaborating with local people, the voices of favela residents remain embedded in a framework provided by the artist. By this I do not mean that local artists automatically provide a more ‘authentic’ representation. However, no matter how nuanced and informed ‘outside’ representations may be, these projects ultimately reproduce existing power relations in which favela residents are silenced because others do the talking for them.

What about social organisations and NGOs that use art as a means of self-expression? Without a doubt, these projects are valuable in many ways and quite often bottom-up initiatives. Nevertheless, the images they produce are usually presented only in their social and often therapeutic contexts. In other words, they are not taken seriously as artworks in their own right. To a certain extent, the same can be said for Morrinho. In the words of Bianca Freire-Medeiros and Lia de Mattos Rocha (2011): “Morrinho’s artists are never just artists, but always necessarily ‘artists-favelados’”. Considering the exhibitions Morrinho has been part of, however, it is clear that their international reception is inherently different than the majority of works produced by artists from favelas.

Should we conclude, then, that Morrinho houses the most talented artists to be found in Rio’s favelas? Well, probably not. Rather, we should consider how they got to this point. These favela teenagers did not appear at the Venice Biennial unexpectedly. A few years after they started, they were ‘discovered’ by two Brazilian film producers who decided to start working with them on short films in and about the model. This led to an exhibition in Rio de Janeiro and the ball kept rolling from there. Throughout this process, Morrinho’s participants developed into clever and articulate spokespersons for their project. At this moment, Nelcirlan talks as seriously and reflectively about his art as any artist. In other words, mediation is no longer necessary for him to frame his project’s social and artistic relevance.

In most accounts, Morrinho is mainly praised for its temporary projects with favela children and for serving as a positive example to local youth. While these concrete social projects are the least active branch of the project, their significance lies in the way participants redefine their role as ‘artists-favelados’ in an international and city-wide perspective. The importance of this redefinition becomes evident when considering the recent (and often problematic) popularity of artists working in favelas and social programmes employing art. What distinguishes Morrinho in this context, as I have tried to argue, is that they not only let the world hear their voices without mediation or framing, but also prove that what they have to say should be taken seriously. Perhaps even more than an example to local youth, Morrinho should thus serve as an example to the art world and international NGOs, whose members, albeit unwillingly, still all too often underestimate and silence the favela residents they are trying to help.

Simone Kalkman has an MA in Art History and an MSc in Latin American Studies. She will start her PhD, focusing on participatory art projects in Rio’s favelas, at the University of Amsterdam this September. 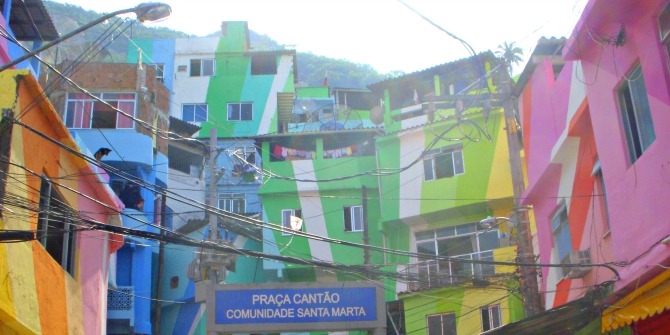 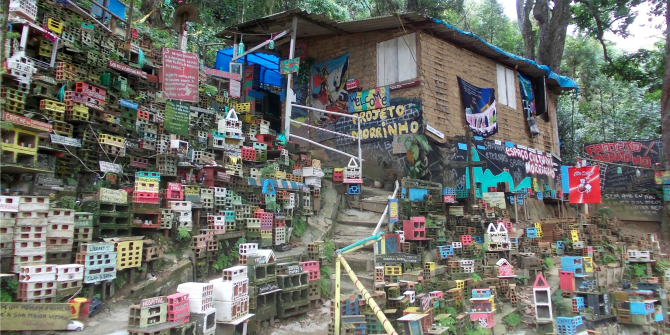