A measured response to criticisms of the LSE’s new appointments

A measured response to criticisms of the LSE’s new appointments

Oh, and also, for those who care about these things: I am most definitely posting this in an independent capacity. My views reflect the views of neither of the institutions with which I am affiliated, nor do those institutions swear as much as I do. Probably. Or at least they only do it in private.

Two things happened in my little corner of the interwebs this week. First, a dear friend discovered the (fabulously sweary and very NSFW) website Get In the Sea, and tagged me in a Facebook post to tell me so. For those who are not familiar, it is a site that posts images of, or links to, things, people or events that its creator(s) finds objectionable with a caption exhorting them to ‘get in the fucking sea’ (it’s funnier than it sounds). Naturally, I was delighted by this development; I have long been a follower of the site – there are days on which only its unique blend of righteous indignation and creative profanity seem able to raise a smile for me – but it pleased me greatly to know that for this, among many other things, my friend and I have shared enthusiasm. It is always nice to be reminded of why your friends are your friends: because of the random synchronicity of humour, life experience, outlook, whatever. Apparently we both enjoy succinct critiques of consumer culture and injustice with a side of foul language. This makes me smile. 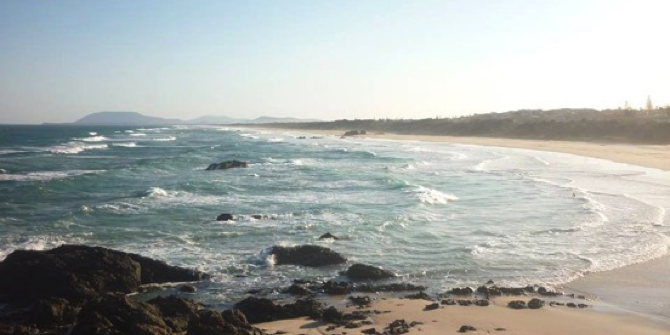 The sea, to get in (photo by author)

And, second, my social media feeds were jammed with the news of Angelina Jolie’s appointment at the London School of Economics and Political Science. My construction of that sentence is entirely deliberate: mass news media coverage of the appointment of four new ‘Professors in Practice’ at the LSE Centre for Women, Peace and Security focused almost exclusively on the credentials of Angelina Jolie Pitt (while mostly dropping the Pitt because who cares about calling her by her actual name when we’re busily engaged in tearing her down) to occupy this position, mentioning in passing if at all the other three new appointments (Jane Connors, Director of International Advocacy at Amnesty International Geneva, William Hague, former UK Foreign Secretary, and Madeleine Rees, Secretary General of the Women’s International League for Peace and Freedom, for those of you who managed – understandably – to miss their names).

Let’s talk about all the ways we could have critiqued these appointments. Let’s talk about race, as suggested by the as-ever insightful Megan MacKenzie, Anuradha Mundkur, and others. I have seen (in my extensive but admittedly not exhaustive search of the interwebs on this topic) not one argument founded on the perpetuation of white privilege that these appointments represent. All four of the new Professors are located in, and enjoy the privilege of, the Global North (to varying degrees, to be sure); their appointment reinforces the colonialist dynamics of the academy which erase people of colour as legitimate knowers by whitewashing both history and the present. Putting these four people in the position of Professor, affording them credibility as experts, functions to reproduce the associations between whiteness and legitimacy that organise our knowledge economies.

Relatedly, we could also talk about the ‘white savior industrial complex’, a term coined by author Teju Cole to draw attention to the ways in which – far beyond the academy – these logics of race and power reproduce the assumption that Whiteness bestows upon each individual the authority to pontificate about solutions to global problems. The White Saviour is the personification of coloniality: as Cole explains, ‘The White Savior Industrial Complex is a valve for releasing the unbearable pressures that build in a system built on pillage’. The White Saviour Industrial Complex focuses attention on the individual ‘Doing Good’ and thus obscures the structural power dynamics at play: continuities in foreign policy that lock in global political hierarchies; wide-spread acceptance of and support for militarism and multiple related forms of gendered and racialised oppression; and extractive and exploitative (neo)colonial economic practices, among other things.

And while we’re on the subject of economies, let’s talk about the construction of another kind of knowledge economy, one that permits the association of celebrity with authority. By all means, let’s critique the ways in which the rise of celebrity culture and the concomitant media landscapes contribute towards an anti-intellectualism that damages all of us, and is implicated in the devastation being wrought upon institutions of higher education across the UK, North America, Australia and probably beyond. Let’s talk about the broader power dynamics in the neoliberal academy that force precarity upon those at entry level and hyperemployment on those with and without job security in part by repeatedly disavowing those pursuing a life of the mind, by treating with hostility and contempt those who have dedicated their lives to learning and teaching at tertiary level, particularly in the arts, humanities and social sciences (simultaneously, of course, bloating administration and management even as cuts or hiring freezes are announced in the academic workforce and adjunctification of higher education becomes more and more prevalent). What does this have to do with celebrating celebrities? Structurally, society benefits from recognising the expertise of experts, the intellect of intellectuals, and from protecting the academy as a space in which such expertise and intellectual engagement can flourish.

We can definitely talk about all these things. But none of these things are the things that have been raised in critiques of Angelina Jolie Pitt’s appointment. These critiques (and I am summarizing here) are more along the lines of ‘But she’s a celebrity! Why should she get to call herself ‘Professor’? It’s dumbing down the academy and oh, she’s real pretty, so how could she possibly know anything about anything?’. Let me respond to each of these in turn. First, to depict Angelina Jolie Pitt (I’m getting tired of writing that out each time so I am going to abbreviate to AJP now) as a ‘celebrity’ demonstrates a mad lack of understanding of what she has done as an activist, and more formally, for humanitarian causes. She was appointed as UNHCR Goodwill Ambassador in 2001. She has been on more than fifty field missions and after more than a decade of service as Ambassador, she was promoted to the role of Special Envoy to the High Commissioner and empowered ‘to represent Guterres and UNHCR at the diplomatic level’. She’s no bloody dilettante. And in case you were wondering where I’m getting most of this information from, it’s Wikipedia. This isn’t special secret insider knowledge, people. One Google search will demonstrate AJP’s credentials as a UN official with a long-standing commitment to advancing human rights, particularly the rights of refugees, and even more particularly, the rights of women. 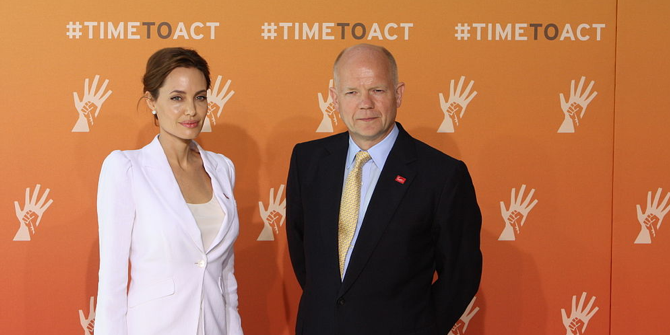 Two of the new ‘Professors in Practice’, doing the thing that presumably got them the gig. Image credit Wikimedia Commons CC-BY-2.0.

But by all means, let’s focus on the fact that she made a few bad films and wore a vial of blood around her neck for a while. Let’s ignore the fact that she was apparently instrumental in bringing conflict-related sexualized violence to the attention of William Hague, then UK Foreign Secretary, and, in doing so, mobilized one of the most significant investments of government resources in an initiative aligned with the UN’s Women, Peace and Security agenda, from which the LSE Centre derives its name. (I’m not going to get into the critiques of this initiative, and the ways in which the fetishisation of sexualized violence is profoundly problematic here, because other, much smarter, more eloquent people have made this case already.) Let’s just dismiss her as a ‘celeb’ and ignore the fact that she has committed the last decade to learning how to do humanitarian work properly, respectfully, and well.

Let’s dismiss her as a ‘celeb’, and make scathing attacks on the LSE (which is, see above, a bastion of white, male, privilege that has made some very dubious intellectual decisions in the not too distant past, for sure) about how the appointment of AJP is ‘dumbing down’ the academy and detracting from the ‘real’ expertise of those who have ‘earned’ their academic titles. This is a critique mostly coming from academics themselves. I have two things to say on that (three, actually, but the third is mostly just swearing): first, visiting professorial appointments are a thing. Honorary doctorates are a thing. On the occasion of the award of the next honorary title, I expect to see similar frothing outrage about how this banker or that novelist didn’t earn said title. Second, it disappoints me tremendously to see smart people be so very complicit in the reproduction of the idea that expertise and authority accrues only in the body of the (white, male, ‘first world educated’) Professor. Decades of feminist theory shows us the importance of recognising ‘women’s human rights actors as cross-cultural theorists’, but even more than that, are we so astonishingly arrogant that we cannot accept that we – and our students – might learn something from someone whose pathway to insight is not a traditional one? ZOMG she dropped out of acting classes and once studied embalming? That totally means we should ignore the last fifteen years of practical experience she has in the field.

Which brings me to my final point: the internet is happy to ignore the last fifteen years of AJP’s service to UNHCR, and dismiss her as a ‘celebrity’, and brush past the fact that three other people were also appointed to the same role, and comment on how beautiful she is, because the internet is snobbish, sexist, and selective in their indignation.

Let’s be better than that. Let’s engage critically, where critical engagement is necessary and sustainable. Bring me critiques of race, and privilege, and the woeful and shocking state of higher education in the 21st century in which context these appointments are bread and circuses. Bring me critiques of the hypervisibility of the sexualised female body in war and how this detracts from both recognising women’s agency and recognising the multiple other ways in which women across the world are persistently and routinely violated in war and when at ‘peace’. Bring me these things and I will applaud. But do not bring me entirely gendered assumptions about how expertise and authority should be embodied in the academy, or mansplaining bullshit about how I ‘as a woman’ should protect my professorial privilege. No. For that I will not stand. That nonsense can get in the fucking sea.

This post first appeared on The Disorder of Things on 26 May 2016 and is reposted here with permission. 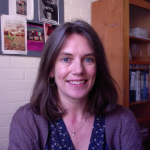 Dr Laura J. Shepherd is an Associate Professor of International Relations at UNSW Australia in Sydney, Australia. Laura is particularly interested in feminist and poststructural accounts of gender, violence, and security and much of her work investigates concepts and performances of authority, legitimacy and power through these theoretical frameworks. Laura has published widely on these topics in journals such as International Feminist Journal of Politics, European Journal of International Relations, and International Affairs, and she is author/editor of six books, most recently co-editing “Understanding Popular Culture and World Politics in the Digital Age with Caitlin Hamilton (Routledge, 2016).