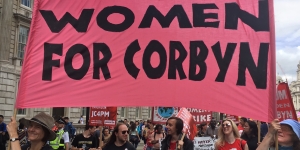 Although  British political parties have increased the number of female MPs in Parliament, a neoliberal framework privileges a liberal feminist approach to politics that leaves women with a very specific kind of female representative that fails to represent the interests of the majority of female voters. The women that are visible within the centre-left Labour Party are those that are most ideologically liberal, with leftist figures such as Dianne Abbot and Emily Thornberry receiving at best no media coverage, and at worst heavily critical coverage.  It is a question of political visibility which leaves female Labour voters with the choice of either jumping on a liberal feminist movement, and supporting popular media-friendly female politicians, or choosing to vote for visible socialist male politicians such as Jeremy Corbyn and John McDonnell. The media’s presentation of women having an uncomplicated choice when it comes to voting in terms of their gender risks rendering such women that choose to vote for more ideologically-suitable male candidates invisible.

Whilst some are cynical of Theresa May’s feminist credentials, most commentators suggest she has the ability to act for women simply because she is one. Meanwhile, young women that vote for male politicians are criticised precisely because they have chosen to vote for a male candidate over a female candidate. There was little room to recognise young women’s support for UK Labour leader Corbyn as his supporters were branded ‘brocialists’ . This uncritical commitment to a politics of presence has failed to tackle why young women are voting for such candidates. Furthermore, what seems to go unnoticed, is that many voting women are also concerned with the ideological credentials of female Labour MPs It may not be surprising that some women are critical of Theresa May, particularly as her political stance is considered more to the right than her male predecessor with plans that include abolishing the Human Rights act.  So despite Harriet Harman notoriously approaching women with a pink bus to get them to vote in 2015, it seemed that Jeremy Corbyn’s anti-austerity message may have held more sway.

Corbyn cultivated something of a radical celebrity image, and despite the media labelling Corbyn and his fellow left-wing allies as sexist, and bad for women, 60% of female Labour members voted for him in the 2015 leadership election, increasing to 64% in 2016. Such results challenged the sentiment that women believe women to instinctively act for them, and presents a serious challenge to how women should pursue political organization. This has been heightened by the establishment of the Women’s Equality Party. Established in 2015, the party claimed to be nonpartisan with the vision of improving gender equality, but it has received criticism for espousing a liberal viewpoint that has failed to tackle issues of race and class. While the Women’s Equality Party have claimed they are in the interests of all women, perhaps it is time to look at who women are voting for rather than telling them how they should vote.

A one-dimensional focus on a politics of presence risks leaving women that go against the liberal status quo as either absent from political conversation, or dismissed for being “not feminist enough”. By deciding that certain male politicians could not represent the interests of women, liberal feminists and the media ultimately cast off and marginalize the voices of  women that thought they could best represent them. We need to look at which women are offered as persons to represent us in order to understand why certain women may reject them. We also need to recognise that the critiques and challenges are silenced  precisely because they pose a challenge to a liberal feminist woman-centred approach.

Rosanna Hutchings is a former Gender, Media and Culture (MSc) student at LSE’s Gender Institute. It was here that she developed an interest in women and British party politics, and her dissertation was a gendered analysis of the media coverage of Jeremy Corbyn. She currently works at the women’s charity Girlguiding and is a campaigner for Renters Rights London.

Bad Behavior has blocked 1541 access attempts in the last 7 days.