The relationship between gender and power is without a doubt a touchy and highly debated subject. In current times, despite decades of feminist fighting, men still hold and wield most political and social power. Because of the perceived rigidity of gender identities and gender roles, it is difficult to imagine a world where these power relations could be turned upside down, placing women in power and men as their subjects. However, this is what happens in Naomi Alderman’s 2016 novel The Power. The novel portrays a world where women and girls discover that they have a physical, electrical power that can be awakened in their bodies. This makes women’s confidence and assertiveness grow exponentially and this physical power in turn leads to a paradigm shift with a reversal of the power structures and the conceptions of gender. But is a world with women on top really a better place than our current world?

In my review, I will use the concept of power in two ways. The word “power” will refer either to the bodily electrical power introduced in the novel, or to power in a more abstract sense, namely social power or political power. Where the contextual difference may not be entirely clear, I will modify these uses of ‘power’ with adjectives such as ‘physical’ or ‘electrical’ to denote the first usage and ‘social’, ‘political’ or ‘socially constructed’ to denote the latter.

In The Power, we see many examples of the reversal of gender identity markers. We see a linear switch on a television show in which the female host Kristen gains confidence and assertiveness, and becomes the main host with ‘gravitas’ (p. 211), whereas the male host Matt is ditzy, attractive and seemingly only there to complement Kristen: ‘Kristen is saying, the fourth-quarter isn’t looking good. Matt is laughing attractively and saying, Now, I don’t understand that kind of thing at all, but I’ll tell you what I do know about: apple-bobbing.’ (p. 246) There are also many examples of non-linear gender identity changes taking place, such as men who have skeins,[1] be they naturally occurring or surgically inserted. Alderman builds up a gender discourse, and tears it apart by introducing characters who attempt to resist the discourse. By doing so, Alderman highlights the absurdity of contemporary Western gender discourse. She shows us some of the cracks and problems in the system, and the arbitrariness of gender is made visible as the result of social construction. One example of this is the male character Darrell, who has a skein implanted into his own body. Here is a character who actively chooses to go against the notion that skein equals woman, and this further deconstructs the gender binary and illustrates that gender identity can be an active choice and is not determined by biology.

When women as a social group become more powerful as a result of gender role reversal, men are socially seen in a way that mirrors how women have and currently are socially placed in our world. This is illustrated by the character of president Tatiana who says: ‘Just like a man does not know how to be silent, thinks we always want to hear what he has to say, always talking talking talking, interrupting his betters.’ (p. 229) These kinds of statements are examples of the discourse contemporary western feminism is trying to deconstruct, because it supports an underlying idea that men and women are not equal and have different determinist characteristics. However, in this novel, these statements are made by women about men, and they introduce perhaps a disappointing notion that powerful women can be just as vicious as powerful men. What at first seems to be a novel about empowering women, it does more to reveal the inherently corruptive nature of power. The result of Alderman’s reversal of traditional gender roles is the dreary conclusion that feminism’s goal of eliminating gender inequality is perhaps not realistic. Ultimately, the novel begs the question: would the world really be a better place with women in power? The women who claim political power in the novel may initially seek it in order to change things for the better, but ultimately they become the dictatorial leaders they were trying to overthrow. As the character Margot comments to herself, ‘She wants [power] because she wants to knock him down.’ (p. 254) Alderman illustrates how power, elusive as it may be, has the tendency to corrupt its wielder. The women’s reasons for seeking power are not all pure, and the power corrupts them just as much as it would have a man. However, because the reader is not used to a world with women in power, it is all the more striking to see women be corrupted by it, and the inherent corruptive nature of power is brought to the surface. Towards the end of the novel there is a harrowing description violence performed by women upon men:

There is no sense in what is done here this day. There is no territory to be gained, or a particular wrong to be avenged, or even soldiers to be taken. They kill the older men in front of the younger with palms to the faces and the throat, […] Many of them take some of the men, and use them, or simply play with them. They offer one man a choice between keeping his arms or his legs. He chooses legs, but they break their bargain. (p. 283)

The women partaking in this are sadistic and animalistic in their treatment of men, and it is extremely uncomfortable to read because it is so very recognisable as gender-based violence against women and shows just how equally violent a reversed power setup would be. The scene is reminiscent to descriptions of war crimes. It brings to the readers’ attention that when it comes down to it, gender does not really make a difference; both men and women have the capacity of extreme cruelty when in power.

In her review of the novel, Amal El-Mohtar of The New York Times writes, ‘it’s difficult to bear the conclusion […] that if our world were destroyed and rebuilt with women in charge it would look exactly as it does with men in charge.’ Men are not determined by biology to be more cruel or sadistic which cause some of them to become the corrupted power wielders we have seen throughout history, just as women are not determined to be saint-like which would cause them to be genteel, benevolent leaders. Human beings are just human beings, and the way we behave is a result of the discourse we have been taught. As Alderman herself has said about the novel’s conclusion:

Finally, you have to ask, are women better than men? They’re not. People are people. You don’t have to think that all men are horrible to know there are some men who abuse their strength. Why wouldn’t the same hold true for women? There is a small minority of sadists in the world who muck it up for the rest of us.

Historian Mary Beard writes in her manifesto Women and Power from 2017: ‘If women are not perceived to be fully within the structures of power, surely it is power that we need to redefine rather than women?’.[2] If our understanding of power results in cruelty and sadism towards the less powerful gender, surely the solution is not merely that the victimised gender becomes the more powerful and vice versa. A change in the discourse of power is required, including a change in how we allow the powerful to feel entitled to act towards their subjects. It requires a more level playing field, where one is not more inherently powerful because of arbitrary categorizations such as gender and gender expression. Naomi Alderman introduces and discusses this conceptual issue with our discourse of power in The Power, but the question is then whether human beings will have the ability to change this discourse of power when it is such a strongly established norm and premise for the way the world is run. 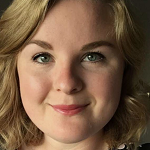 Ida is currently working towards her bachelor in English at the University of Copenhagen with a focus on literary criticism and minority studies. This post is a shortened version of her bachelor thesis on The Power and poststructuralist theories on power and gender. Ida lives in Copenhagen and enjoys discovering new literature, following dogs on twitter and smashing the patriarchy. Ida is on Twitter as @IdaAaskovDolmer and on instagram as idaaaskov.

Bad Behavior has blocked 1206 access attempts in the last 7 days.