by A. Rahman Ford

After years of being ashamed of my body, for some strange reason I decided one day to take some semi-nude photos of myself.  To this day I have no idea what compelled me to do it.  Maybe my higher self had gotten tired of my cowering and hiding underneath long-sleeved shirts, even during the summer.  Maybe my subconscious had had enough of it, too.  I’ve learned that sometimes progress isn’t incremental.  Sometimes it’s radical and traumatic, and arrives whether or not we’re ready for it.

I had to take a cab to the photographer’s downtown studio because I was already becoming unsteady on my feet as the neuropathy began to progress.  I had formerly enjoyed walking downtown but the weakness in my legs and my excessive, uncontrollable sweating had forced me to give that up.  With some difficulty, I walked up the stairs to the photographer’s studio.  The entrance was a small narrow hallway which opened to a larger room.  As I entered, I noticed that he had several dolls placed around the entrance.  It was like he had his own miniature Isla de las Munecas, except it wasn’t on some strange island outside of Mexico City, it was in a photographer’s studio in downtown Philadelphia.  The scene itself was somewhat surreal, as if I was walking into the toybox of a middle-aged man with a serious doll fetish.  I understood he was an artist, and that artists could have strange proclivities.  Still, I admit that I was unnerved and unsure how to react.

The dolls were of all shapes and sizes, and in a variety of types of dress.  Some were Barbie-type dolls with flaxen hair and designer clothes, molded by the Barbie gods to be fantastically human.  These were the dolls with idealized physical attributes: able limbs that were never-too-long and never-too-short, lips that were always smiling shamelessly, and flawless skin that must have meant they were always healthy.  Other dolls were more exaggeratedly childlike with bulbous heads, over-sized eyes, and cherubic dimensions. There seemed to be no rhyme or reason to the dolls’ arrangement.  The ugly were mixed with the pretty, the tall were mixed with the short.  I really had no idea what to make of it.  I thought it was creepy, but at the same time I was intrigued.

I asked the photographer about the dolls.  He replied, “I’m fascinated by the duality that dolls confront us with.  Why do dolls instill fear in people, while at the same time we find them comforting?  Is it because they look so much like us?  Why do we project our inadequacies into a piece of plastic?  How can the same plastic body be both beautiful and frightening?” I had to admit it was a curious Jungian ability – bestowing life upon a lifeless object by projecting the repressed shadow aspect of one’s relationship with oneself into it.  What did the fact that I was unnerved say about me, about my relationship to my own repressed shadow self, about my relationship to my own disabled body?  I knew I had come to the right place.

The ancient Roman engineer Marcus Vitruvius Pollio believed that the human body should fit into a circle and square, to illustrate the divine, metaphysical nature of the human form as a perfected microcosm of the world.  As an architect, he believed that there could be a universal symmetry and proportion to both temples and men.  Certain, pre-ordained measurements were by their very nature aesthetically pleasing and harmonious.  Famed artist Leonardo DaVinci would adopt Vitruvius’ idea in his famous Vitruvian Man sketch.  In the notes accompanying the sketch, DaVinci set forth his formula.   “The length of a man’s outspread arms is equal to his height.”  But what if your arms are crooked and spindly like mine?  Does that disqualify me from obtaining the divine mantle of perfection?  “The greatest width of the shoulders contains in itself the fourth part of the man.”  But my shoulders were narrow and bony.  “The whole hand will be the tenth part of the man.”  But my hands were abnormally small, pathetically weak and disturbingly effeminate.  I couldn’t even make a fist and punch things like a real man should.  By any Vitruvius’ estimation, my measurements were aesthetically displeasing and cacophonous.

After chatting about his doll exhibit for a bit, the photographer showed me his portfolio.  I had already seen several samples of his work online, so I was familiar with his style.  We perused a binder full of photos and he commented on each of them.  Most were model lookbook-style photos.  The models were what one might call classically beautiful – quintessentially Vitruvian.  With each turn of a page the models grew more “beautiful,” almost unremarkably so, monotonously so, tediously so.

He then showed me another set of photos.  These were photos of women, some dressed as dominatrices, outfitted in leather.  Other women wore latex, had several body piercings, were semi-nude and were hanging in obviously painful positions.  I found the images both obscene and profound, lewd yet natural.  He explained to me how so many women in Philly led secret lives – demure doctoral students by day, disciplinarian dominatrices by night.  He mentioned that he knew a few Temple Ph.D. students that were dominatrices to help pay bills.  I wondered if there were any at Penn, where I was studying.  A titillating thought.

After we finished with the photos, I made an appointment for the actual photo shoot.  I had made it clear that the photos would be nude.  The photographer was perfectly okay with it, but I still wasn’t completely sure I was.  Some time after our immediate meeting, I returned to the photographer’s studio for the shoot.  For someone with life-long body acceptance issues, I was surprisingly relaxed.  The photo shoot itself was almost unremarkable and completely professional.  I left the studio feeling proud and accomplished that I followed through rather than continuing to cower and hide. 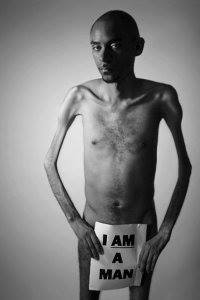 When I retrieved the finished photos from the photographer, I was afraid to look at them.  I wasn’t sure what to expect.  When I got home, I opened the envelope and was struck by a torrent of mixed emotions.  Of course, I had seen myself naked before, but never from that vantage point.  The black-and-white photos allowed the shadows to fall into the caverns of my wasted muscle.  I could see clearly the two crooked, asymmetrical arches that were attached tenuously to my cantilevered shoulders.  They were bony and intolerably weak, yet more than strong enough to hold that simple document that served as my proclamation of emancipation.  My legs were like brittle flying buttresses, and I almost felt like they were going to snap just as I was looking at the photo.  But they didn’t.  They held firm.  The camera showed my body as an architectural anomaly, as an anti-Vitruvian monument.  I found the unity of my light and shadow in a black-and white photo.  Taking and sharing those photos were two of the best demonstrations of self-love I have ever made.  My confrontation with my body and my self made me more free.

Whether the body is abled or disabled, made of plastic or made of flesh, our perception of its beauty or ugliness is a product of the fear we choose to force into it.  The human Vitruvian game that we are all taught to play is actually comprised of a cruel judgmental mathematics that diminishes perfection rather than heightening it.  The human form cannot be reduced to an equation.  Ugly can only be if we chose to internalize those definitions that come from who-knows-where for who-knows-what purpose.  Self-expression – the expansion of the perception of beauty rather than its limitation – is the key to personal acceptance.  Contrary to what Vitruvius believed, “universal” beauty can only be expressed in the melding of all verses – subverse, perverse, inverse, converse – into a unified, all-encompassing “verse.”  And I learned all that from creepy dolls and a discussion about dominatrices.

I believe anti-Vitruvians embody another one of DaVinci’s best known works – the Mona Lisa.  Her beauty defies the shackles of a circle and square, and her smile is a subtle acknowledgement of the latex catsuit and leather whip that sit at her feet. 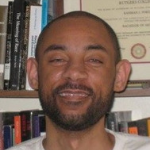 A. Rahman Ford is an ardent advocate for self-acceptance and self-love. He earned his law degree from the Howard University School of Law and his Ph.D in Political Science from the University of Pennsylvania.