In March 2011, Dr Bill Kissane organised an international workshop on the topic of reconstructing identity after civil wars.  The book which followed, After Civil War: Division, Reconstruction and Reconciliation in Contemporary Europe, 1918-2011, was published in November 2014. Edited by Bill Kissane, the book explores both the theoretical and the practical, using case studies on Bosnia, Cyprus, Finland, Greece, the Irish Free State, Spain, Kosovo, Northern Ireland, and Turkey to compare reconstruction projects. Three of these case studies were written by members of the Government Department’s Conflict Research Group; Jim Hughes, ‘Reconstruction without Reconciliation: is Northern Ireland a Model?’ Bill Kissane, ‘A Nation Once Again: The Reconstruction of National Identity after the Irish Civil War 1922-1938’and Denisa Kostovicova and Vesna Bojicic- Dzelilovic, ‘Ethnicity Pays: The Political Economy of Post-Conflict Nationalism in Bosnia-Herzegovina.’ Here, Bill Kissane considers the book’s findings further, asking what the relationships between reconstruction, nationalism and reconciliation are in post-conflict societies.

Many words creep into the social science vocabulary from the real world without sufficient critical analysis. ‘Reconstruction’ is one of them. Commonly used with reference to places, events, and objects of art, its place within the social science lexicon is very specific. It denotes large-scale projects of social and political engineering after the experience of war and/or natural disaster, events that are of such magnitude that either the state or international organisations play a major role in restoring the status quo ante. The first such experiment was the Reconstruction era following the American Civil  War (1861-1865).

Within political science, the state is normally seen as the main agent of reconstruction. When the social science literature began to write about this type of reconstruction in the 1990s, the focus was on state-building, and the earlier literature on nation-building was largely forgotten about. The success or failure of reconstruction was seen in terms of capacity-building. Others, more steeped in the older nation-building literature, continued to see the viability of states entirely in terms of ethnicity and nationalism. Some participants in this project were uneasy with (a) the amount of social engineering implicit in the term and (b) the assumption that the reconstruction of the state should also involve the reconstruction of national identity. Nonetheless, civil wars inflict a deep wound on a society’s sense of themselves, and this wound remains the most sensitive part of its body politic. 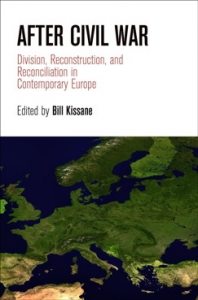 One logic of the case selection was to compare ethnic with non-ethnic conflicts. The comparison poses the question of whether reconstruction benefits from the relative homogeneity of society in ethnic terms. The conclusion was that the relationship between institution-building and identity-formation has been no less complicated in the older cases, was counter-intuitive. All the cases showed reconstruction to be something other than a one-off exercise in social engineering, but an iterative process, involving reconstructions across the decades. Reconstruction has of course specific and desirable policy aims: disarmament, demobilisation, physical rebuilding, political integration, judicial reform etc., which form part of peace-building. Yet institution-building is only the first phase, and longer-term psychological and cultural reconstructions usually follow. Generally, the pattern has been for the polity to be reconstructed first, but the trauma of civil war (and the needs for closure, commemoration, and reconciliation) is addressed over the long durée.

Ultimately, all reconstruction projects have to be evaluated with reference to the goal of reconciliation. Yet there is no automatic connection between shared national identity and the willingness to reconcile. Perhaps societies can only come to terms with their divided past if social change places them in a context where civil war divisions cease to be central, and where different circumstances allow a re-evaluation. Indeed the evidence is that it is not the state which dictates the terms of reconstructions in the long- run, but rather social transformation and indeed globalisation. Hence this was an inter-disciplinary book: it included an anthropologist, a social geographer, historians, political scientists, and two sociologists.

Recent reconstructions have taken place in contexts where international institutions have become more important, where democracy has become a central aim, where changes in foreign policy goals affect attitudes to domestic oppositions, and where global processes like immigration allow the nation to be recycled, for good or bad. These changes allow for a perspective in which the civil war trauma does not dominate public life, and enables new values to guide new interpretations of the civil war past.

Bill Kissane’s workshop on restructuring identity after civil wars was supported by the LSE Annual Fund and the Department of Government small conference and workshop fund. After Civil War: Division, Reconstruction and Reconciliation in Contemporary Europe, 1918-2011 was published in 2014 by the University of Pennsylvania Press website. Bill Kissane is an Associate Professor in Politics and member of the Conflict Research Group in the Department of Government at the LSE.