In the late hours of Sunday evening, it was confirmed that the ‘No’ camp had won an unexpectedly resounding victory in the Greek referendum—by 61% to 39% the Greek people had chosen to reject the terms of the most recent bailout proposal from their creditors (the ECB, the EU and the IMF). When Alexis Tsipras, the Greek prime minister and leader of the radical left party Syriza, addressed his people following the result, he claimed it as a “victory of democracy”. Here, David Hope discusses the referendum, and why democracy may actually make it harder to strike a deal to keep Greece in the Eurozone.

The referendum outcome makes one thing abundantly clear: there are limits to the scale of austerity that electorates are willing to tolerate. Five years after Greece received its first ‘Troika’ bailout­—with a quarter of the workforce (and half of all young people) unemployed and the economy barely three-quarters of its initial size—Greek voters decided overwhelmingly that enough was enough.

What comes after the ‘No’ vote is much less clear, but the immediate resignation of controversial finance minister Yanis Varoufakis, who infuriated creditors in the protracted bailout negotiations that preceded the referendum, gives a clear indication that the Greek government favours returning to the negotiating table. They have also reiterated that they do not have a mandate to take Greece out of the euro. It is thought that they would agree to most of the creditors demands on austerity and structural reform in exchange for a substantial reduction in the overall debt burden (either through the extension of repayment periods or direct write-offs). Tsipras feels his hand has been strengthened by the referendum victory and the recent IMF report suggesting that further debt relief is necessary to put Greek government finances back onto a sustainable path.

Whilst a deal is still feasible, it is going to be extremely challenging politically. Tsipras is part of the problem. His negotiating strategy has eroded trust and burnt a lot of bridges, and creditors worry he would renege on commitments made as part of any fresh bailout deal. The creditors also want to avoid diluting their message that member states must live within the rules if they wish to be a part of the single currency.

Another major barrier is that decision-making in the Eurozone remains intergovernmental, so that major decisions require the support of all member governments. The Greek people may have spoken, but this does not mean the governments of the other 18 Eurozone countries can discount the preferences of their own electorates, to whom they are ultimately accountable.

There are many Eurozone governments that have reason to worry about electoral backlash should they accept a watered down bailout deal. The German government’s uncompromising stance reflects the loss of patience of many Germans with Greece, which has not been helped by the vilification of the Merkel government by the Syriza government and the Greek press. As the biggest creditor to Greece, German taxpayers also stand to lose the most from any haircut on Greek debt. The Spanish centre-right government has an election to fight later in the year and fears a deal will embolden anti-austerity parties at home, such as the far-left Podemos. The other recipients of Eurozone bailouts, the Portuguese and Irish governments, are unsurprisingly reluctant to accept concessions that have not been offered to their own long-suffering electorates.

The urgency of reaching a deal is compounded by the problems in the Greek banking system, which since late June has limited withdrawals to €60 per day. Even with strict capital controls and banks closed for business, the system is only being kept afloat by €89bn of emergency funding from the ECB. In the wake of the referendum result, the ECB put more pressure on the Greek banks by refusing to raise the cap on emergency funding and tightening collateral requirements. The collapse of the Greek banking system would likely force the Greek government to create a temporary parallel currency and to issue IOUs to pay government employees and contractors.

Greece defaulting on their bailout loans and abandoning the euro is now a very real possibility, especially as the referendum has done little to bridge the divide between the country and its creditors that has been blocking a deal for the past five months. No one knows exactly what would happen if Greece were to leave the euro; there is no legal precedent or set procedure for a country to exit the single currency. It is likely, however, that the market turmoil and uncertainty unleashed by ‘Grexit’ would carry large economic and political costs for both Greece and the wider Eurozone.

Whatever happens with Greece in the coming weeks, the fact it is teetering on the precipice of euro exit has made plain the perils of managing an economic crisis in a monetary union that lacks a political union. The requirement for crisis responses to satisfy 19 heads of government, each with one eye on the domestic political arena, has produced neither timely decisions nor responses that accord with the best interests of the Eurozone as a whole. It is telling that the decision that did most for averting the sovereign debt crisis, the commitment of the ECB to act as a lender of last resort in government bond markets (OMT), was taken by politically independent technocrats at the central bank. Where decisions have relied on the member states, the interests of the monetary union have often been forced to play second fiddle to national interests. That is not a recipe for successful crisis resolution and may yet break up the monetary union itself.

David Hope is a PhD candidate (expected 2016) in political science at the Department of Government, London School of Economics and Political Science. His thesis explores the political economy of global imbalances and youth unemployment in advanced economies. His wider fields of interest are comparative political economy and macroeconomics. 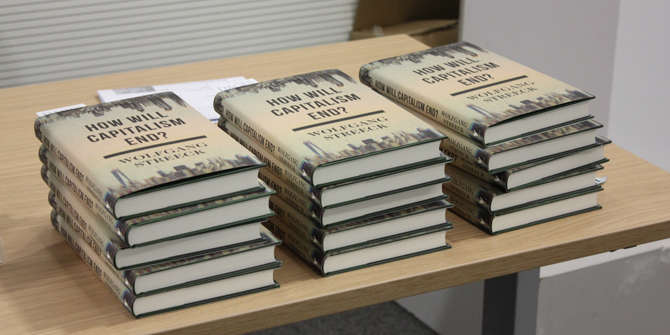