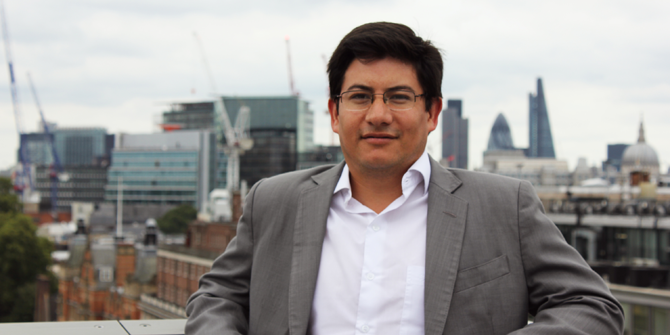 In the Department of Government we continue to support early stage researchers after they complete their PhD studies. In this series, we speak to Government PhD graduates entering the job market to learn more about their research and its impact, and what makes them exemplary candidates for employment in academia globally.

Here, Gustavo Bonifaz Moreno tells us about his research on the gap between legality and legitimacy in moments of political crisis and how he teaches students to examine literature through the lens of current affairs to facilitate engagement with complex problems.

Tell us about your research interests and research.

My research interests are very broad. As an undergraduate I studied both Law and Political Science and hence in a very general sense you could say that I am interested in issues within the grey area in which Law and Politics intersect. I am interested in understanding how it is that different processes of social change affect the political structure of societies and how do they, in turn, affect its legal structure. On the other hand I am also interested in understanding the opposite interaction, namely the real changes that can be promoted in society through law and how democracies could work better to create positive feedbacks between social and legal change.

One way of seeing this relationship comes from an interesting philosophical debate that developed in Germany between the First and Second World Wars. I am referring to the debate between Carl Schmitt and Hans Kelsen on the relationship between legality and legitimacy. I am not a political philosopher, but what I could grasp from that debate is the complexity surrounding the question of what should be the basis for establishing political order in a society. One position sustains that societies can only achieve political order if the political institutions in which they are based upon are legitimate in the eyes of the population. The other position sustains the fact that the rule of law is the best way to structure the relations between the state and society, if we want to establish a well ordered society.

I am really interested in understanding the conditions under which this debate plays out in real societies. Modern societies change at an increasingly faster pace and, apparently, the pace of social change and its interaction with political institutions can explain the growing distance between legality and legitimacy. In 1968, Samuel Huntington developed the latter hypothesis but he didn’t refer to this process, which he labelled as the political gap, from the perspective of the relationship between legality and legitimacy. In my research I try to bridge the gap between the above mentioned academic traditions, in the light of a particular case study.

What has been your greatest achievement so far as an early stage researcher?

I think that two things stand out as achievements. A couple of years ago I coordinated an interesting project. I connected one of the German political foundations in Bolivia -the Friedrich Ebert Foundation- with my academic advisor, Jean-Paul Faguet -from the International Development Department- to co-edit a book in which Bolivian academics and professor Faguet himself wrote different chapters on the relationship between decentralisation and democratisation in Bolivia.

A year after that I was invited by the UNDP and International IDEA to be the lead consultant/advisor to the Bolivian Electoral Tribunal on the first draft of a law aimed at the regulation of political parties and other political organisations in the country. The task was extremely challenging but also extremely exciting since I managed to apply my research skills to solve a massive politico-legal puzzle. After ten months traveling throughout the whole country and after many workshops, meetings and long hours of consultation with key stakeholders, we managed to deliver a coherent legislation draft.

How does your research link to public affairs and global issues?

I think that the issues that inform my research are very relevant for current global affairs. We can see that structural changes caused by global dynamics are triggering crisis and opening gaps between legality and legitimacy in many places. There was, for example, a big debate on the legality and/or legitimacy of the invasion of Iraq after September 11. I don’t think that the invasion was in accordance to international law but the U.S.A. managed to craft an alliance in order to legitimate the invasion behind the discourse of the war on global terror. Furthermore, here in the UK the Labour Government legitimised its support of the invasion based on the argument that the ruthless Government of Saddam Hussein lacked any democratic legitimacy and it had to be replaced for a government whose authority would derive from the will of the people.

In Spain, currently, there is a very heated debate between the representatives of secessionist parties and movements in Catalonia and the central government in Madrid. Massive demonstrations and, interpretations of the victory of these parties in the last regional elections as a popular mandate to advance towards independence, have legitimised this demand. However, the central government in Madrid is openly rejecting this interpretation based on the illegality of a demand for secession coming from any of the country’s autonomous regions. The relation between the central government and the regions of Catalonia and the Basque Country has been historically tense since Spain returned to democracy. However, the impact of the financial crisis in 2008 has triggered the opening of a gap between legality and legitimacy in Spain.

Tell us about one of your recent publications.

I am currently in the process of finishing a chapter for a book on territorial cleavages and constitutional transitions. I am the leading author of a Chapter on the Bolivian constituent assembly and how regional and ethnic tensions have shaped the current model of decentralisation and autonomies in the Bolivian constitution. The co-author of the chapter is George Gray Molina, currently Chief Economist for Latin America and the Caribbean at UNDP. The book will be edited by Professor Sujit Choudhry from the Centre for Constitutional Transitions at Berkley and George Anderson from the Forum of Federations, and published by Oxford University press with the support of International IDEA.

What is your approach to teaching students?

I like to engage my students by making them think critically on the literature through the lenses of current global affairs. I think that by doing so concepts can be used as tools to engage with the complex problems that our societies face in the Twenty First Century.

Gustavo is a PhD candidate in the Department of Government at the LSE. You can view Gustavo’s profile, including his job market paper, and that of our other job market candidates on our website.