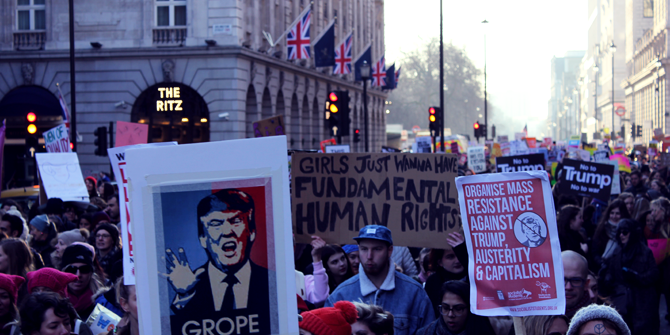 Ali Cirone, LSE Fellow in Political Economy in the Department of Government, reflects on the Women’s March on London which took place on the 21 January 2017.

The United Kingdom is known for being gloomy in winter, yet recently London has seen bursts of colour from an atypical source — protest signs. On January 21th, 2017, thousands of individuals participated in the Women’s March on London, marching from the US Embassy and concluding with a rally in Trafalgar Square. Anyone passing by central London was treated to clever signs saying “Dump Trump, or there will be hell toupee”; “Grab ‘em by the emoluments,” and “Women’s Power, Bitches Unite” (a sign carried by a dog); all to protest a large set of freedoms currently being threatened by recent political events.

The Women’s March on London was a “sister march”; an event organised in solidarity with the Women’s March in Washington, DC, the day after the Presidential Inauguration.  By the time the event had concluded in Washington, almost half a million people had participated, making it the biggest protest in American history.

Yet what was even more amazing was that the movement was international. While it’s difficult to count attendance in crowds, US political scientists Jeremy Pressman and Erica Chenoweth compiled data on sister marches and affiliated events across the globe. They estimate that 94 international locations had affiliated marches. Some took place in large cities, such as Paris, Sydney, or Amsterdam; other events were more humble but perhaps more notable because of it (such as those in Nova Scotia, or Goatfell Mountain). In the United Kingdom, there were no less than 17 documented marches, the biggest of which was London. The expected turnout in London was 20,000; and by the end of the event there was closer to 100,000.

I attended the London march on January 21. It was my first protest, and I was joined by fellow academics from LSE and a cancer researcher. We carried signs saying “Scientists for Open Borders and Open Minds” and “Academics and Experts Can Help.” The event was orderly, accessible, and featured a very diverse range of participants (male and female). As an American, I particularly listened for accents. And I heard voices from all over — not just expat Americans marching in London because they couldn’t be at home, but British and other European citizens. One could say the international mix of participants was not surprising, given that London is a global city. Yet this movement began as a protest against a (democratically elected) leader of a different country; in a time where the United Kingdom and Europe are facing a set of challenging and charged political issues themselves.

Then again, therein may lie the power of the Women’s March — the movement is characterised by a wide and inclusive liberal platform. It not only includes gender equality and social justice, but progressive policies for LGBT individuals, immigrants, refugees, workers, the disabled, and minorities, as well as addressing climate change. As a result, it can easily gather support from all corners of society, including key actors such as the moderates, wealthy, and well connected. This broad platform also goes beyond Trump, and speaks to many issues faced in Europe and the UK. In London just as many signs were about Brexit, the Conservative government, populism, and the EU as they were about women’s rights. Immigrants marched for equal rights; mothers marched with their young daughters to demonstrate the importance of political engagement; and men marched to show solidarity for gender equality. Each had a different reason, but all showed up.

Yet its greatest strength might be its greatest flaw, particularly on an international level. More often, successful social movements are organised around single, unifying issues: this was the case in Occupy Wall Street, Black Lives matter, or protests against specific regimes like the Arab Spring. A broad platform may make it hard to sustain engagement, particularly since international marchers are one step removed from the Trump presidency. The question on everyone’s minds is, will the momentum last? And how to turn this into sustainable action?

While many think that the primary purpose of protests is to send a strong signal to policymakers, there is reason to believe their ultimate utility comes through a different mechanism — political engagement. One study suggests that participation in protests get people more politically active, and preliminary evidence from after the Women’s March also suggests this might be case. In the United States, a number of grassroots initiatives have benefited from the recent wave of political activism — from the development of a platform that helps liberals identify swing districts, a website providing advice on how citizens can effectively lobby Congress, or even the fact that in less than a month, the ACLU has received over 24 million dollars in donations. In addition, there seems to be increased interest in both political involvement and running for office by both American youth and women.

There is also something to be said about the importance of sister marches. What the sister marches in the UK and across the globe have demonstrated is solidarity for liberal principles against what seems to be a wave of nationalist and populist politics, and shown that citizens can and will effectively organise around broad platforms. Yet to sustain such momentum, groups in all countries will need to channel such frustrations into permanent organisational structures and new groups, or link them more directly to domestic politics. So far, the Women’s March website has provided a comprehensive call to action, and the London branch of the movement began organising a letter writing campaign to UK Prime Minister Theresa May. The rally at Trafalgar Square also served to make visible a number of UK based organisations that share the movement’s values, which might increase membership. Only time will tell if this movement can be sustained.

That being said, in the short term civil society is mobilising across the globe. Almost immediately after the Women’s March, on January 30th, there was a large event in London organised outside Downing Street to protest the current state of the US-UK relationship. The US has seen almost daily protests against the Muslim Ban, cabinet confirmations, and a whole host of executive orders initiated by newly elected President Trump. Meanwhile, Romania saw tens of thousands protesters take to the streets and successfully stop a controversial corruption bill, in the largest protest in Romania since the fall of communism in 1989. It’s safe to say that there looks to be no slowing down, and these new political movements might be here to stay. I’m stocking up on Sharpies and poster board, just in case.

Alexandra Cirone is a Fellow in Political Economy in the Department of Government, LSE and a PhD candidate in political science at Columbia University. 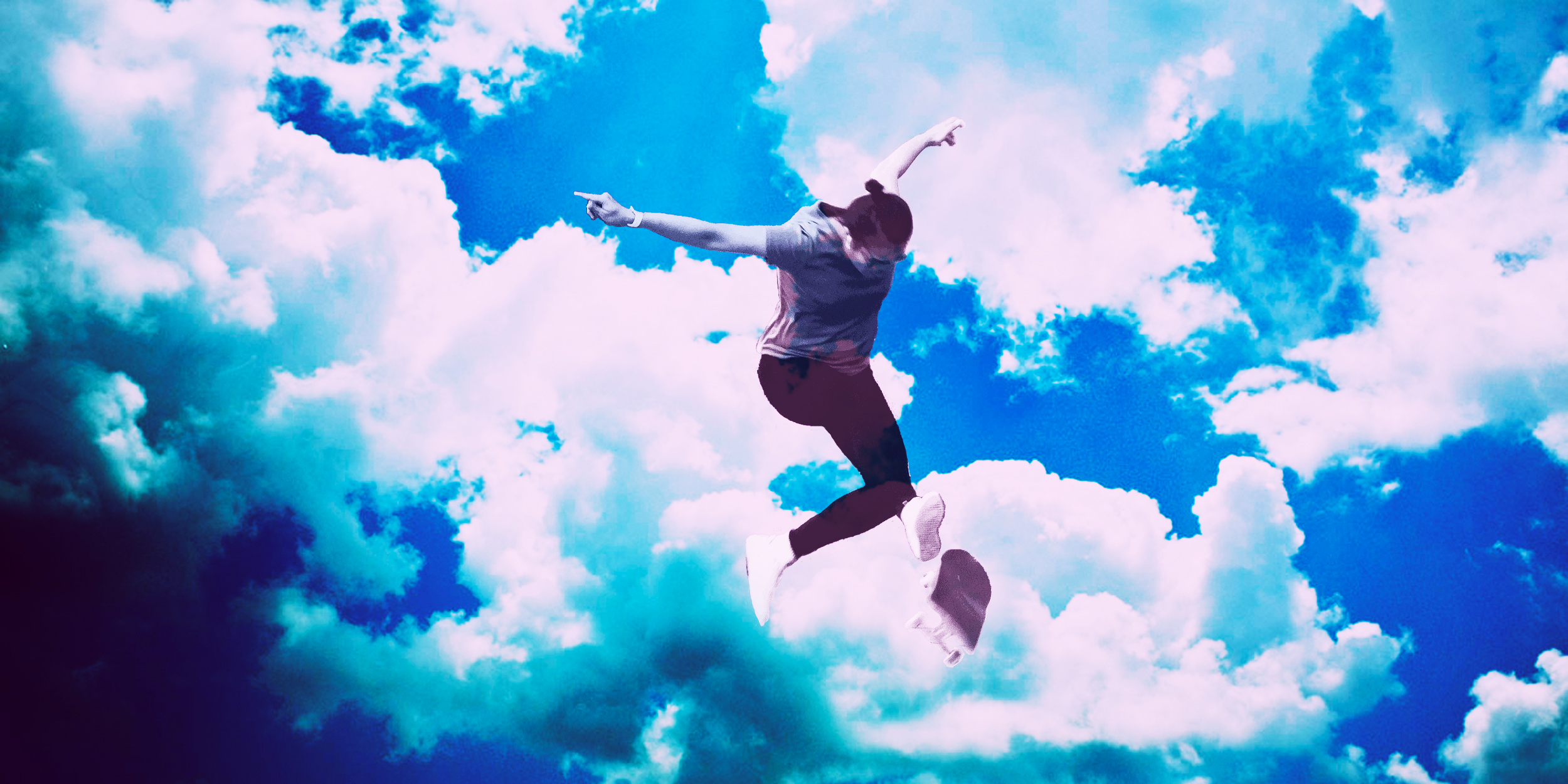 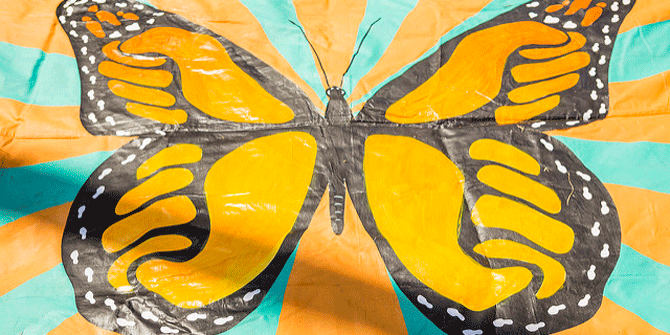 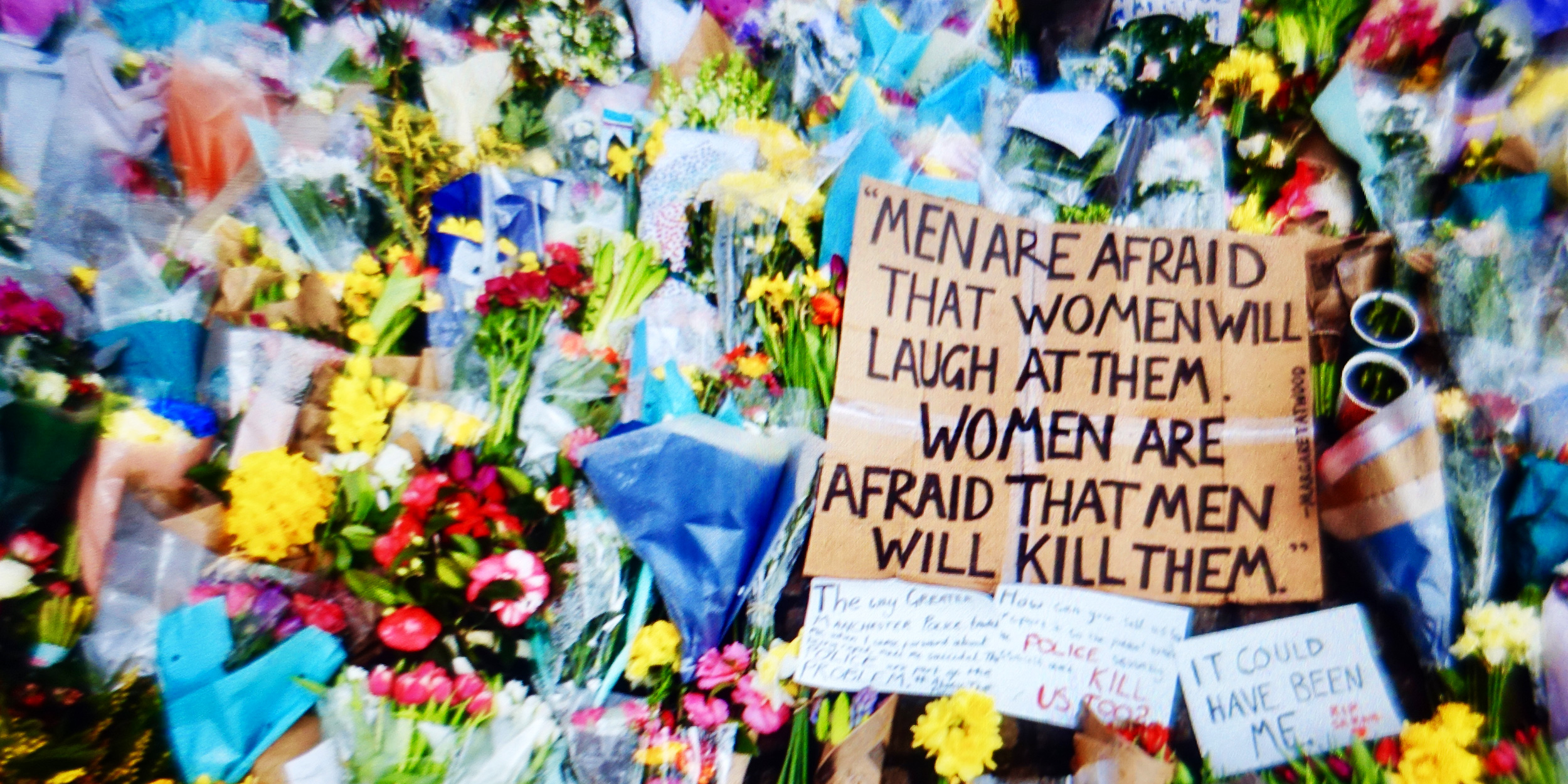