Professor Martin Lodge and Professor Arjen Boin analyse the challenges for global leaders needing to make critical decisions with a lack of data amidst an existential crisis such as COVID-19.

We are in crisis. The COVID-19 pandemic is causing an escalating number of victims and a free-falling global economy. It is likely to get much worse before we will see any improvements. COVID-19 is emerging as the ultimate test for political leaders. Competing views exist as to whether national political leaders are ahead or behind ‘the curve’ of fast-changing dynamics. They are clearly struggling.

Leaders are facing an inevitable task. They have to make critical decisions, but they lack data. The most basic knowledge is missing: we don’t know how many people have been infected, how many people have died from this disease, how many patients will flood the hospitals in the coming weeks, and how the essential economic and state infrastructure is going to perform.

But there is more uncertainty. There is uncertainty about the reliability of information flows (can we trust the data from this or that country?), uncertainty about how to evaluate advice (how to deal with health experts who offer competing interpretations of the data?), and uncertainty as to how different interventions will effect populations and achieve desired outcomes (will social distancing protect the particularly vulnerable?). There is uncertainty as to whether proposed strategies will come with irreversible consequences (will our economy recover?). In short, leaders have to make life-or-death decisions under conditions of deep uncertainty.

Making sense of a crisis is one of the hardest tasks in crisis management. Having to decide without knowing creates a terrible conundrum that weighs down on leaders.

How do leaders deal with such pressing uncertainty? We know that most people do not like uncertainty.  There is, we are told, a human and organisational tendency to create a convincing narrative based on the little information they have – a narrative that explains what’s going on and suggests an answer, a strategy. People, and organisations, are also said to stick with that narrative for a long time, disregarding emerging evidence suggesting they are wrong in their assessment.

How do leaders respond to such existential uncertainty? If we look at past crises, we can recognise three types of coping strategies.

Sit tight, do nothing: it can pay to wait it out. If it works, leaders will be praised (they are ‘shrewd’). If it does not work, history won’t be kind (leaders were ‘paralysed’). The Dutch Prime Minister Hendrikus Colijn famously dismissed the threat of a German invasion, hoping to remain neutral as the Dutch had managed to do during World War I.

A principled approach: leaders adopt a principle (‘minimise harm’) and apply consequential logic (in this case, this is widely known as the ‘better safe than sorry’ precautionary principle). It has the advantage of sending a clear signal to wider society. It seems, at first sight at least, to address the problem. Politically, it has the advantage of looking statesmanship-like. Also, if it works nobody will revisit it in hindsight. This is a favourite approach of leaders, because history suggests it is what real leaders do: we shall fight on the beaches (Churchill), we will smoke ‘em out of their holes (Bush), we will do whatever it takes (Draghi) or we will turn the tide (Johnson).

Debates about this precautionary leadership principle are widespread in everyday life: think GM-foods, e-cigarettes or the use of personal data. In situations of crisis, such a ‘better more than less’ approach seems reasonable given widespread uncertainty. It nevertheless comes with a few challenges: it requires a high degree of state authority, it is difficult to change tack if the dynamics of the situation seems to be requiring an altered course of action, and it may be prone to knee-jerk reactions and over-investment.

A Pragmatist approach: leaders forego dominant principles and base their actions on a mixture of reasoning and feedback. They treat the situation as an experiment: try something that might work, study the consequences, and adjust where necessary. The underlying idea is that a crisis will gradually yield its secrets, when probed in a careful manner.

This is undoubtedly an advantageous approach in many respects, as it foregoes big, irreversible decisions that result in large unintended consequences. Instead, it allows for immediate adjustments on the basis of instant feedback. This Pragmatic approach is, however, dependent on some fundamental pre-requisites. The working hypothesis needs to be carefully argued, based on scientific reasoning (the way NASA built its moon rocket). Quick feedback needs be organised and requires almost immediate responses. Time-lags, therefore, need to be extremely short and responses need to be ready to deal with sudden non-linear dynamics. Feedback will create a constant stream of dilemmas, if not polylemmas. Perhaps most challenging, leaders need to explain that they are experimenting in the face of crisis and other jurisdiction’s contrasting approaches (a principled approach is a much easier sell). If all these pre-requisites are in place, then decision-makers can utilise incoming information to respond ‘thermostat-like’ to emerging knowledge.

So far the theory. How are leaders actually doing in this crisis?

The current crisis provides an example of decision-making under conditions of deep uncertainty, where the potential harm is irreversible (in terms of death count and economic damage, not just political careers). It also throws light on how ‘precautionary’ or ‘pragmatist’ approaches work in practice.

Let’s start with what we know and don’t know. We know it’s super contagious and that it can cause a nasty death. We know that the elderly are much more likely to die from it. And they will occupy scarce commodities for a long time (IC beds), placing already over-stretched health systems under potentially unbearable pressure.

How do leaders cope with this limited knowledge challenge? The ‘wait and see’ approach has been popular with autocratic leaders: Iran, Russia and the United States have long denied the presence and potential impact of COVID-19. No response was initiated, at least initially.

A few leaders have sought to adopt a Pragmatist approach. The Dutch Prime minister Rutte is a prime example. Rutte explained that ‘the reality is that nobody knows what the correct approach is [..] with 50% of the knowledge we have to make 100% of the decisions’. Rutte roundly rejected the principle of a societal lock down. The Dutch would rely on scientific data, ‘adjusting the dials’ when and if necessary. Rutte has found it hard to explain the working hypothesis underlying his Pragmatist approach, but he is, at the time of writing, still holding on to it in the face of mounting criticism.

Sooner or later, most leaders seem to adopt a principled approach in this crisis. In the early phases of the pandemic, some leaders embraced the principle that the economy should be protected.  The ferocious backlash pushed most leaders to adopt the principle of minimise harm, in health and economic terms. The language is clear: we are in a battle! This will hurt. We will have to wait this out. There is no turning back. This frame provides a clear and actionable path: supposedly ‘hollowed out’ nation-states can display their coercive ‘muscle’ in intervening in societal and economic spheres, national boundaries are being reasserted, and solidarity comes as a bonus. The price of this approach will be considered at some later point in time.

This is not the time or place to condemn one approach or support another, or to suggest that one government’s approach is superior to another.

For advocates of the Pragmatist approach, one lesson is clearly emerging. Under conditions of uncertainty, creating and communicating a Pragmatist frame is super difficult. It simply cannot work if the underlying logic is not clear and consistent (within and across countries). For the Pragmatist leaders, the drama of today’s crisis leadership may well be the premature convergence towards a principle that is costly and unproven. For those leaning towards a precautionary position, in contrast, the drama of today’s crisis leadership is likely to be the belated convergence towards a precautionary approach where questions of cost and lack of early decisiveness will have caused unnecessary strain.

As we seek to learn from crises, we must study decision-making in situations of uncertainty. Post-crisis judgements of leaders can get rough. But they are trying to make sense of a crisis, one way or another. The current crisis can help us understand – especially when the evidence rolls in – how these approaches perform.

Martin Lodge is Professor of Political Science and Public Policy and Director of the Centre for Analysis of Risk and Regulation (CARR) at LSE. 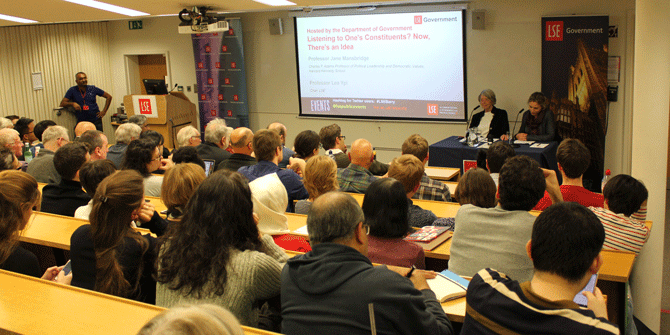