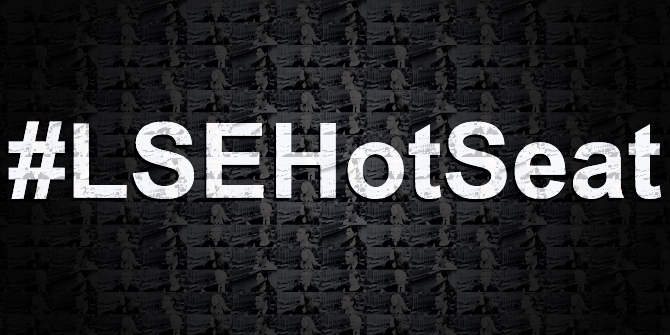 ‘The HotSeat’ asks our departmental experts important questions on key topics in politics and government. Watch the latest episodes here for discussion and analysis on news and current affairs.

‘The HotSeat’ is also available as a podcast – listen and download via iTunes and SoundCloud.

What did the 2018 Local Elections tell us about the current landscape of British Politics? Professor Tony Travers gives us his analysis.

HOTSEAT: Tony Travers on the results of the 2017 UK General Election

We ask Professor Tony Travers how we ended up with a hung Parliament, the implications for the Conservatives and Labour, what it means for Brexit and how long it could be before the next General Election.

Thomas Leeper discusses Donald Trump’s inauguration and what it tells us about the policy and approach we can expect from his presidency.

Professor Tony Travers discusses the key political events of 2016, an unprecedented year in politics which saw the UK vote for Brexit and Donald Trump elected US President.

What is ‘Post-Truth’? Alexandra Cirone discusses the latest political buzzword and what it really means for politics in 2016 and beyond.

As the world continues to digest the outcome of the 2016 US Presidential Election, Brian Klaas discusses the result and what we might expect from a Donald Trump Presidency.

As the political fallout from the EU Referendum continues to grip the UK, Simon Hix discusses the implications of the result and what Brexit might mean for Britain and Europe.

Tony Travers discusses the implications of the Local Election results, Sadiq Khan’s victory in the London Mayoral Election and the shape of the UK’s political landscape as the EU Referendum approaches.

On the morning after voters went to the polls across the UK, Martin Rogers speaks to Tony Travers to discuss the picture emerging from the 5 May Election results.

Thursday’s Oldham West and Royton by-election was the first electoral test of Jeremy Corbyn’s Labour leadership, which came under even further scrutiny in the wake of events surrounding this week’s parliamentary vote on Syria.

Since presenting his Budget in July, George Osborne has faced significant challenges to some of his spending policies, particularly the widespread opposition to his plans to cut tax credits. Kate Alexander Shaw gives her verdict on the latest proposals announced in his Autumn Statement and their political and practical implications.

In the wake of May’s general election, the 2015 party conference season has seen the Conservatives consolidate their plans for the next five years of majority rule whilst opposition parties set out their stall to mount a challenge in the 2020 contest.

On the 27 September voters went to the polls in the 2015 Catalonian Parliamentary Election. We sat down with Dr Jonathan Hopkin to discuss the results and the implications for those in the region seeking independence from Spain.

In September VW admitted to using software which enabled some of their vehicles to cheat US emissions tests. We sat down with Professor Martin Lodge to discuss the situation and its implications in Europe and beyond.