This note investigates two issues: First, to identify the most important trade partners of Greece over the last twenty years and how their relative significance has evolved. Second, to examine how sensitive is the Greek export growth relative to the economic growth of Greece’s trade partners?

The Greek economy is in recession for the seventh consecutive year and as a result it is imperative to explore potential sources of growth. Export activity is a significant factor that stimulates economic development (the export led growth hypothesis). International trade has increased in the last decades, contributing to the wealth of the nations on the one hand and making the world more interdependent on the other. The share of Greek exports in the GDP has been increasing steadily from 14.29% in 1996 to 21.17% in 2006, reaching 30.11% in 2015. Although Greek exports are rising as a share of GDP, their composition differs to the rest of the EU as service exports are dominant in the Greek case (relative to traded goods). The subsequent analysis focuses only on Greek goods exports.

The results with regard to (i) are presented in the following table. Over the last twenty years, Germany with 11.45% and Italy with 10.44% were, on average, the most significant markets for the Greek export goods. They were followed by the UK with 5.58%, Turkey with 5.56% and Bulgaria with 5.19%. The rest of Europe with 17.15% and the Balkans with 15.20% represent a significant share of Greek export goods. USA and East Asia hold a 4.65% and 3.57% share respectively. 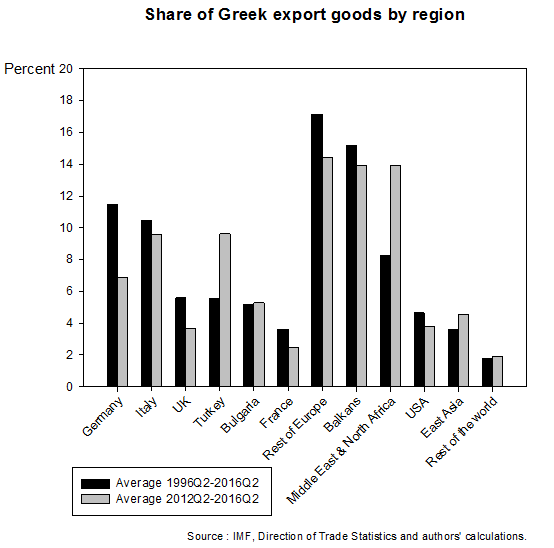 Focusing on the last 5 years, Turkey with a 9.63% share, Italy 9.59%, Germany 6.87% and Bulgaria 5.29% are the four main trade partners of Greece. The Greek exports to the UK, France and the rest of the Europe have experienced a decline. Notable increase has appeared in the Middle East region and North Africa. Both have doubled their share and now represent a 13.95% of the market. 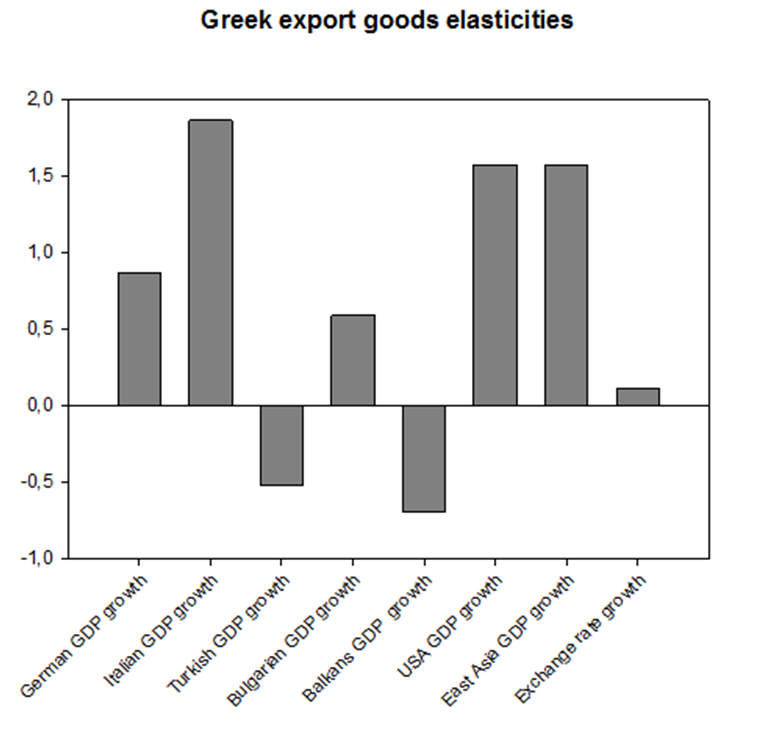 The size of a region’s economy and its trade share were not taken into account in the analysis above. Once we control for the economic size of each region, East Asia and USA emerge as more significant and have a major impact on the Greek export growth. The latter was anticipated since these regions have a high share of the world GDP. When we control for the trade share of each region, economic growth in Italy emerges as the factor that affects Greek export goods growth the most. This can be explained by the fact that the Italian market absorbed approximately 12% of Greek export goods during the second quarter of 2016.

The dynamic analysis of this model can further enlighten us about the relationship between Greek export goods and economic growth of the trade partners of Greece in the long term.  This would gauge how a positive 1% shock on the real GDP of Greek trade partners will affect the Greek export goods growth in the upcoming quarters. Thus, a positive shock of 1% in the real GDP of East Asia this quarter will cause an increase in Greek export goods growth of about 9% over the next four quarters. The corresponding figure for the USA is about 8%. Germany and Italy are following with 2.8% and 2.6% respectively.

Based on the results above and the IMF global growth projections, estimates of the future Greek export goods growth can be estimated. Greek export goods are anticipated to increase over the next three years but with a slower pace than expected. This is due to the downward growth revisions mainly for the USA and East Asia and secondary for Italy.

To default or not to default? That is NOT the question!

The Left in government again: Principled politicians and pragmatic policies – A lesson on how to square the circle

How to boost Greek exports

Bad Behavior has blocked 8 access attempts in the last 7 days.