by Bob Erens and Gerald Wistow

The final report from the ‘early evaluation of the Integrated Care and Support Pioneer programme’s first 18 months suggests the 14 English areas comprising its original cohort have been making some headway (11 others joined them last year). But many are finding the going tough in terms of progress towards the initiative’s goal of ‘whole system’ integration organised around the needs of individuals and their carers.

The Pioneers were drawn from around the country as exemplar areas where local authorities and NHS bodies (such as Clinical Commissioning Groups) could drive change “at scale and pace”. The programme commenced in November 2013 and is notable in adopting a user-centred definition of integrated care developed by National Voices and endorsed by the group of agencies forming the National Collaboration for Integrated Care and Support:

‘My care is planned with people who work together to understand me and my carer(s), put me in control, co-ordinate and deliver services to achieve my best outcomes.’

The Pioneers’ aspirations are not of the kind that can be delivered overnight, especially as part of an initiative that has attracted only minimal additional funding from central government. The programme is intended to last for five years, so the early evaluation was always going to be an initial overview of its development rather than an assessment of its outputs and outcomes.

The study is a mostly qualitative piece of work based on nearly 200 interviews conducted between spring 2014 and spring 2015. It suggests that by the latter date the Pioneers had made only limited progress towards delivering service change. Barriers to greater health and social care integration, which at the outset were optimistically viewed as challenges that could be cracked, with assistance, are proving tricky to break down. In many cases, a narrowing of focus is becoming evident as time goes on.

A diverse group, drawing closer together

One of the immediately striking things at the start of the programme was the Pioneers’ diversity. They ranged from single London boroughs, and towns such as Barnsley, to whole counties such as Worcestershire, Kent and Cornwall. As well as facing different levels of financial challenge in the current climate of austerity, the geographical disparities between Pioneers mean wide variations in terms of organisational complexity. Some might feature just one local authority, one NHS acute trust and one clinical commissioning group (CCG); others are characterised by an overlapping group of organisations such as multiple CCGs, hospitals and/or local authorities.

While key differences remain in terms of the scale, complexity and context of the various Pioneers, it appears that their implementation of initiatives is in many cases coalescing around a narrower set of activities. In particular, these often relate to specific interventions for older people with substantial needs; for example, by strengthening multi-disciplinary teamwork in primary care settings. However, there is less evidence so far of wider integration strategies – which might also involve housing, welfare and employment – being developed with a view towards improving population health.

Barriers to integration, and the need for central interventions

The obstacles to closer health and social care integration – cultural, organisational, financial – are not new ones. But while cash injections to facilitate change were never an element of the Pioneer programme, the offer of national assistance to make it easier to dismantle such hurdles formed part of the original call for sites to apply for Pioneer status. The provision of national support to address and remove such barriers has, in practice, been seen to be patchy at best in many Pioneer sites.

A particular frustration has been participants’ inability to get around issues of information governance, which have hindered the sharing of patient/service user information within and between health and social care services. Such sharing is crucial for a number of reasons – in terms of care co-ordination, of risk stratification and of potentially tracking costs to enable the development of pooled budgets. Pioneers have been trying a number of often inefficient workarounds with varying degrees of success, but a national solution – which ministers had indicated would be looked into – appeared little closer by the end of the data collection in Spring 2015 than it did in 2013.

Another area of tension is around resourcing. The NHS rewards activity in hospitals – nationally there’s great concern they should be financially viable, and achieve foundation trust status – yet the thrust of integration policy is that hospitals should have a proportionately smaller role in the overall pattern of care. Joint workforce development, meanwhile, has been complicated by the possibility that an entirely new type of workforce, able to work holistically, might be required in order to meet the demands of integrated care contexts.

Looming large over all these individual challenges is the environment in which the Pioneers’ development is taking place. Local authority partners, in particular, are dealing with substantial well-documented spending cuts, which also impact on the voluntary sector. In addition, the NHS is experiencing an extended period of minimal growth.

A consequence of this financial climate has been the emergence of an ‘integration paradox’, in which growing need and shrinking budgets create a stronger imperative for shared services, even as the context makes it harder to make headway. Participants in many Pioneer areas have been sanguine about making progress slowly in a harsh financial climate. But engaging staff who may be preoccupied with keeping core services afloat can be tricky, and some have reported a retreat into more ‘siloed’ ways of working as fire-fighting has taken precedence over systems transformation.

As mentioned above, it is too early to be drawing definitive conclusions from the limited progress many Pioneers have made so far. Despite the numerous challenges, a number of interviewees identified positive signs of progress such as individual services under development, staff co-location, shifts in understanding and ownership of integration processes and growing efforts being made to increase consultation and engagement activity. Many felt the Better Care Fund, which creates pooled budgets to protect adult social services and reduce demand for acute beds, had aligned reasonably well with their goals, though some argued it had distracted from their wider service redesign objectives. Most, in the spring 2015 round of interviews, said that the direction – if not the speed – of Pioneer activities in their area was broadly on track.

The question is whether the Pioneers have laid the foundations on which more rapid advances, and a shared sense of purpose, can be built – or whether the difficulties they face will prevent the programme’s wider aspirations being realised. With evidence from the final round of interviews suggesting that the Pioneers’ operating environment was becoming more challenging, the prospects for the former scenario seemed increasingly uncertain in the spring of 2015.

Bob Erens is Senior Lecturer at the London School of Hygiene and Tropical Medicine and Deputy Director of the DH-funded Policy Innovation Research Unit.

The authors thank Alex Turner for his support in drafting this blog. 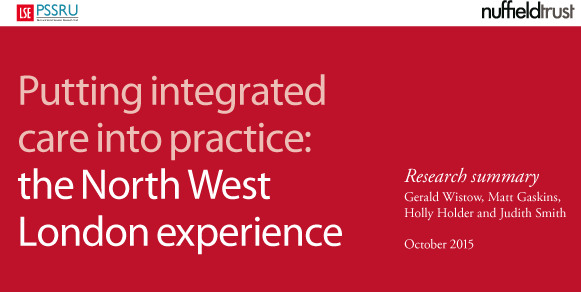