This interview is part of a series of interviews with alumni of the Centre for the Study of Human Rights at LSE. Sam Grant studied for an MSc in Human Rights at the LSE part-time between 2012 and 2014. Interview by Kathryn McDonagh, current MSc Human Rights student. 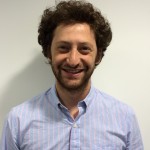 Where do you work now?

I am the Campaigns and Programme Officer for René Cassin. We are a charity working to promote and protect universal human rights, drawing on Jewish experience and values. For the last 15 years René Cassin has led the way on securing and protecting human rights for Jews and non-Jews alike. We have campaigned to save legal aid, mobilised the Jewish community to act on indefinite detention and raised awareness of genocide, run a government award-winning interfaith project to educate on the endemic racism faced by the Gypsy, Roma and Traveller communities and lobbied MPs and Lords on a wide range of issues.

We achieve this by campaigning for change in defined human rights areas through a combination of advocacy, policy analysis, public campaigning and education and building the capacity of activists and lawyers to promote and protect human rights.

In my role, I’m primarily responsible for mobilising the UK Jewish community to engage with human rights issues in the UK. The job is very varied and a typical day can involve anything from meeting with a group of Rabbis to going to Westminster to lobby MPs.

What is the most rewarding aspect of your job?

This job combines two of the most important parts of my identity, my Judaism and my interest in human rights. The job allows me to channel those commitments and energy into making positive change in the communities around me, primarily for those who have been shunned by the majority of society.

What other work experience do you have?

I worked full-time during my part-time masters for Liberal Judaism (a progressive denomination of Judaism in the UK) where I was a youth worker and community coordinator. More importantly, I ran the campaign to make that organisation the first synagogal movement in the UK to receive official accreditation as a Living Wage employer.

What advice would you give someone who wanted to start a career in human rights?

Firstly decide what you mean by a career in human rights. What is it that makes you angry and passionate? I would always centre on that. Decide whether you want to work on UK issues or international issues, whether you want to take a legal focus or move towards activism and advocacy. These things are not mutually exclusive of course, but human rights are broad and you need to know what in particular you are interested in. Once you do, pester people you think might be able to help you, be informed and be willing to work hard.

What was your favourite bit of the MSc program? Professor Francesca Klug. (I was also a big fan of Professor Chetan Bhatt’s festive jumpers.)

Do you think there is anything distinctive about the way in which LSE teaches human rights?

Obviously the multi-disciplinary nature is something that stands out. As is the way you are treated by the Professors and lecturers as an equal in an ongoing conversation.

What is your favourite human right?

We get into dangerous territory when we start ranking human rights but I’ve always been a fan of the preamble to the Universal Declaration of Human Rights. Does that count? Monsieur René Cassin helped write it and it’s a general starting point for when I talk about the beautiful simplicity of human rights: “Whereas recognition of the inherent dignity and of the equal and inalienable rights of all members of the human family is the foundation of freedom, justice and peace in the world.”

Are human rights universal in your view?

Yes, they constitute a socially constructed universal morality which the majority of the world has signed up to. I think the more important question is how we can use the framework of human rights to ensure a more just world for everybody.

The promise of eradicating poverty through human rights