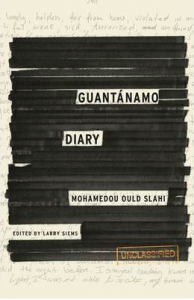 Whatever the architects of the United States’ post-9/11 counterterrorism policy were thinking when they decided to open a ‘secret’ prison camp on a remote military base off the tip of Cuba, we can state with confidence they did not imagine it would become an artists’ colony for bestselling writers.  Unbelievably, though, that is exactly what has happened, at least for one detainee in particular, Mohamedou Ould Slahi, a Mauritanian who has been in Guantanamo Bay for 13 years.

It’s very difficult to get people to care about Guantanamo, and I speak from experience. Previously, I served as the Deputy Director of the London-based legal charity Reprieve, which works on behalf of those who have been unjustly ensnared in the counterterrorism dragnet that the US and its allies deployed in the years following the September 11th attacks.  I was part of the legal team which represented more than a dozen men who are imprisoned at Guantanamo, and in this role, I encountered two distinct groups of people: those who are unaware that Guantanamo is still open, and those are willing to casually dismiss its inmates as ‘bad guys’ who ‘deserve’ to be there.  Mr. Slahi’s book, Guantanamo Diary (an unlikely bestseller in both the Amazon.com and New York Times rankings), may finally help dispel these misconceptions.

I did not work on Mr. Slahi’s case, although his story is representative of so many Guantanamo detainees.  He appears to be neither the victim of some grand conspiracy to subjugate the Muslim world and steal its oil, nor the perpetrator of terrible attacks against Western targets. Rather, he is someone with just ‘the worst luck’ – a pithy characterization made by Cliff Sloan, the Obama White House’s recently-departed Guantanamo guru, who has returned to private law practice after lasting a respectable 18 months in a thankless job.

Mr. Slahi is still detained at Guantanamo; his 400-page book is pieced together from diaries written while incarcerated, which were later passed to his attorneys, via military censors. The claims within are nothing new: descriptions of brutality, torture, and interrogations from intelligence officials who had the apparently mistaken impression that he was an active member of Al-Qaeda and involved in several plots against the United States. More than 20 years ago, Mr. Slahi did engage in some youthful misadventures in the wilds of Afghanistan—but then again, so did the U.S. and its erstwhile friends. In any case, in 2010, a federal judge reviewed and dismissed the government’s evidence against him.  So many of the detainees who remain in Guantanamo find themselves in equally Kafkaesque circumstances: ‘cleared’ of any prosecutable offense, but having nowhere to go.

Guantanamo’s problem has always been that it inspires extreme views in people—not extremist views, mind you, but extreme views.   From its supporters, it inspires extreme, sweeping generalisations of the ‘guilty until proven innocent’ variety, whereby everyone who is in Guantanamo is, ipso facto, a terrorist. After all, this is a prison for the ‘worst of the worst’, as President George W. Bush used to remind everybody. How curious, then, that approximately 660 of its 780 inmates — nearly 85 per cent — have been quietly released without charge, either returned to their own country or repatriated abroad.

From its detractors, Guantanamo inspires extreme sweeping generalisations of a different kind. According to this camp, practically ‘none’ of the detainees have ever been charged with any crime, and everyone inside is a blameless victim of the counterterrorism-industrial complex. Legally speaking, the fact that a majority of detainees have been ‘cleared for transfer’ doesn’t mean that they never committed any wrongdoing, but rather that the U.S. government doesn’t have enough evidence to charge them, or that any evidence they do have was illegally obtained through torture.  The practical outcome may be the same, but the underlying values are not.  I personally believe that many of the detainees currently in Guantanamo are guilty of nothing more than being in the wrong place at the wrong time (sold for bounty by poor, desperate people in a faraway land). However, insisting that they are all ‘innocent’ is distinctly unhelpful, as there are at least a few prominent examples of actual terrorists who have ended up in Guantanamo, and provide fodder for those who want to keep the prison open indefinitely.

From everybody else, Guantanamo inspires extreme apathy, and this is the most dangerous emotion of all. Because whether you believe that Mr. Slahi and his co-detainees are guilty, innocent, or just unlucky, the fact remains that we just don’t know because they were snatched up under the most unlawful of circumstances, tortured, beaten and finally dumped in a forgotten corner of the world for the past 13 years.  Very few have undergone any kind of legitimate judicial hearing which carefully examines the charges against them; some have died within their cells under suspect circumstances; most have just sunk into a deep depression as protracted diplomatic discussions grind on in Washington DC and foreign capitals.

During this period they have missed births, deaths, graduations, weddings, anniversaries and hundreds of other quotidian occurrences which make up a human life.  Some have suffered greatly as they watched the Middle East go up in flames and wondered what happened to their families in Syria, Egypt, Tunisia or Yemen, unable to assist their loved ones in any way.  Some have been ‘lucky’ enough to be released to a third country where they don’t speak the language or have the right to work, and are under constant supervision by the intelligence services. Is this better than being in Guantanamo? Sure; but how depressing that we must accept that as a measure for comparison.

It is anyone’s guess whether Mr. Slahi’s newfound celebrity will positively impact his case; his lawyers certainly hope that it does. But even if it has no practical effect, the success of Guantanamo Diary makes it that much harder for the rest of us to forget that this black hole exists a mere 90 miles off the coast of the continental United States.  That can only be a good thing.

The Elephant in the Room: Human rights and the Mexico-UK “dual year”

The Architecture of a Human Rights Violation