Jed Horner is a Project Director on health, sexual orientation and human rights at the Australian Human Rights Centre and a PhD candidate at UNSW. Previously, he worked as an external advisor to the New Zealand Human Rights Commission and Office of the Children’s Commissioner (Young Peoples Reference Group).

Could you explain the origins of the Sogi’s Story project and who was involved? 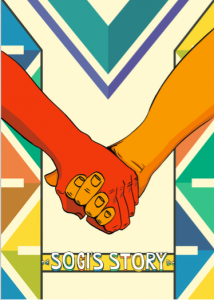 Two years ago, the Commonwealth Forum of National Human Rights Institutions (CFNHRI) identified the issue of sexual orientation and gender identity as a priority. Chaired by the Australian Human Rights Commission at the time, the CFNHRI undertook to build its own capacity and that of its 16 African members to promote and protect the rights of LGBTI people. The AHRCentre was commissioned to design an educational resource that would address misinformation, dispel harmful myths and stigmas and provide possible options for resolution and remedy for individuals and communities facing discrimination on the basis of their sexual orientation, gender identity, or intersex status. The project was funded by the Australian Government’s Department of Foreign Affairs and Trade and the AHRCentre worked with a graphic design studio, The Explainers.

Do you think comic books allow for a more nuanced approach to representation of LGBTI issues than, say, a research report or a documentary feature?

In designing the resource, we were very aware of the need to develop something useful, accessible and transportable to those working to challenge the horrors of discrimination, but that did not endanger them or exacerbate their struggle – given that the majority of the 16 African countries have criminalised homosexuality by law. So, we had to find a format that conveyed information but contained minimal words and captured ideas visually to attract an audience that layers of written text might have alienated. It also had to be easily translatable into French or indigenous languages and graphically meaningful to those without reading skills. In Sogi’s Story, the visual depiction of human rights violations, including corrective rape and assault, can move people in a way that words, although powerful, tend not to. 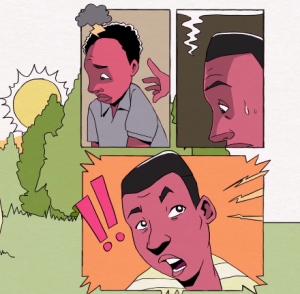 message. How did you approach this challenge in preparing Sogi’s Story?

Given the complex nature of the subject matter, ensuring the presentation of a coherent, universal message to different audiences was a significant undertaking. Working with colleagues from Ghana, Zimbabawe and South Africa, we prepared a lengthy briefing document on the 16 countries, which included relevant domestic legislation and examples of local human rights violations against LGBTI activists, defenders and individuals. Using this document and NGO reports, the graphic design team crafted a love story narrative that acutely communicated the horrors, the tragedy and the hope central to a political struggle for equality.

Terminology is often controversial in debates around sexual identity issues. How did you settle upon the term SOGII (Sexual Orientation and Gender Identity and Intersex Status) for use in the fact sheet accompanying Sogi’s Story?

In many ways, the name of the main character in our comic or graphic novel, Sogi, determined the overall terminology. From the outset, it was quite clear that we had to mould our terminology around international human rights jurisprudence, and not use or invent terminology that didn’t reflect the international legal landscape. The terms sexual 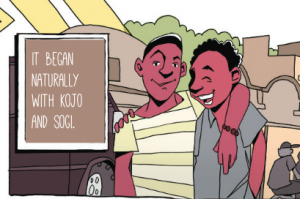 orientation and gender identity, for example, are widely used as evidenced in UN resolutions, as well as the well-known Toonen v. Australia case. We also researched local NGO usage of appropriate terminology. Adopting this terminology allowed us to keep our specific focus consistent with international jurisprudence and with the work of many NGOs working in this area at a regional or local level. More specifically, using this language enabled us to articulate the fact that every human being has a sexual orientation or a gender identity, or may indeed be intersex.

More generally, are there any limitations to the usefulness of a human rights based approach in combating violence and discrimination on the basis of sexual orientation, gender identity or intersex status? 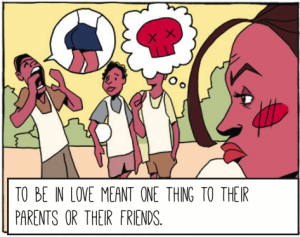 In developing our project, it was very evident that in some contexts, where domestic laws are in violation of international human rights law, the very notion or utility of universal, interdependent and indivisible rights seems unimaginable. But we also recognised the value of equipping people with the knowledge that presented them with alternatives. The challenge lies in translating international human rights principles into practice in local contexts, so that they are appropriate and can be used to educate, mobilise and empower communities, even incrementally. It’s also important to remind communities that they have recourse to national and international human rights bodies and NGOs and that, even in the face of the worst forms of discrimination and related violence, there must and can be accountability, including internationally.

Now that Sogi’s Story has been launched, are there plans to get copies of the comic to the 16 countries involved in the project?

The Commonwealth Secretariat and the Australian Human Rights Commission distributed Sogi’s Story to the 16 African NHRIs who are members of the secretariat.

What has the reaction to Sogi’s Story been so far? 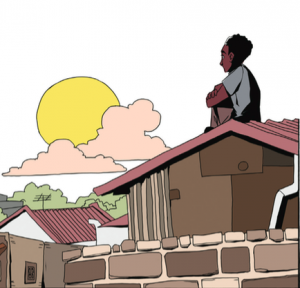 Sogi’s Story was launched in Canberra in September 2014, at an event co-ordinated by the Department of Foreign Affairs and Trade, the Australian Human Rights Commission and the AHRCentre. The South African High Commissioner spoke of the critical importance of the need to embrace difference and Australian Senator Dean Smith said it was appropriate that Sogi’s did not end in a traditional, tidy fashion “because the next chapter in Sogi’s Story is yet to be written. And in a very real sense, we will be its authors.” The resource has been lauded by NGOs, NHRIs and academics. It has been distributed online and is available for download. The resource has also been welcomed not only for its content but its various formats.

This question requires gazing into the future somewhat, but how will you be able to gauge whether the project has achieved its aims?

If there is an increasing awareness of issues surrounding sexual orientation and gender identity, as well as intersex issues, within national human rights institutions that would be an achievement itself. Another key indicator of success would be the extent to which engaging forms of human rights advocacy, including through visual formats, such as Sogi’s Story, are taken up by other organisations, both working in Australia and abroad, to engage a broader audience.

You can view the full Sogi’s Story comic, along with a short video and fact sheet at www.sogistory.com

Want to read more on comics and human rights? Have a look at our Comics, Human Rights & Representation series, published in February 2015.