In January 2009, Colombian President Alvaro Uribe affirmed that after decades of defeats, his country, together with the United States, was finally succeeding in its main challenge: the long war against the guerrillas involved in drug trafficking. The statement gives the dimension of this issue in this South American country, and the great importance of the United States, with Plan Colombia, on this security issue. However, although rarely addressed, much of U.S. aid is funnelled through Private Military Companies (PMC), which provides staff and services of military nature. Such companies, which became world famous after its widespread use in the Iraq War – where its most quintessential representative, Blackwater, has been accused of systematically violating the International Law of Armed Conflict – have become an essential element in the conflict against the former Marxists guerrillas in South American.

Created in the 2000 by the U.S, “Plan Colombia” is intended, officially, to combat the production and trafficking of cocaine in this country of South America, and plays an important role in the fight against guerrillas who deal with narcotics, mainly the Revolutionary Armed Forces of Colombia (FARC). The program has already pumped, until 2009, approximately US$ 1.3 billion, according to the U.S. Department of State.

Of this aid, about 55% is directed to about 25 Private Security Companies, most of them involved with the training of troops, use of Unmanned Aerial Vehicles (UAV) and aid in direct combat with the guerrilla, especially with air support. The hiring of professional soldiers is a common practice in the history of armed conflict. Historically, these soldiers are commonly known as mercenaries. However, modern-day PMCs prefer to call their active staff ‘security contractors’, defining themselves as private military corporations. This nomenclature is not made by chance, since such companies try to avoid the negative stigma often associated with mercenaries.

It’s interesting to note that, under the agreement, the number of U.S. military in Colombia is limited. However, since the treaty refers to American soldiers, the PMCs, whose contractors are designated as civilians, are able to surpass the milestone quite easy. This question is even more important when one analyzes the frequent complaints, from members of Colombian society, about the presence of American troops on their soil and critics who say that the treaty violates the sovereignty of the country.

The great quarrel, however, is over the legal disputes involving the PMCs. Created mainly in the liberal furor of the 90s, such companies were able to stand apart from legal structures that regulate the use of force internationally. Despite the creation, in 1989, of the UN International Convention Regulating the Use of Mercenaries, the PMCs were not encompassed by the treaty, mainly because they claim they are not directly involved in combat actions. These points led to the creation of a grey area in the International Law, where these companies have the freedom to act without being subject to the normal constraints of a regular armed force. Combining these features with the fact that these companies are formatted as formal enterprises – characterized as “civil support” – there are concerns that, in some cases, the activities of these companies may border on ‘mercenarism’ and compromise the proper democratic accountability for the use of force.

In the Colombian case, such points are seen quite clearly. In recent interviews to researchers from the Brazilian Federal Fluminense University (UFF), members of the Colombian army complained about the lack of legal tools for dealing with the PMCs. According to them, many professionals hired by these companies act as they were above the law, generating constant hierarchical conflicts. Moreover, since they are hired directly by the U.S. State Department, often the PMCs are accused of acting without the consent of the Colombian government.

The use of PMCs in Colombia are generating consequences that are still poorly studied and may influence significantly in the security complex of South America. According to a survey conducted by International Humanitarian Organizations, the use of such firms is spreading rapidly across the continent. 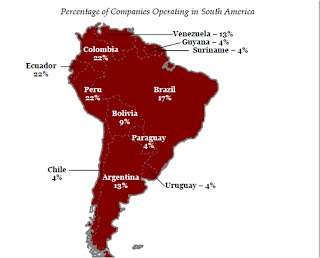 Map: PEACEOPS: 2007 – State of the Peace and Stability Operations Industry

There are not any clear analyses to confirm that that the increase in the number of these companies in South America is a direct result of the growth of PMCs in Colombia. However, taking into account the facilities for the use of such companies, their numbers are expected to grow in the coming years. With the lack of agreement in International Law for dealing with them, it’s still unknown how the employment of these professionals will affect the use of force in the region. In addition, there are the recent military agreements involving the nations of the region, such as Unasur. With a growing concern in the security area, it is unclear how the presence of such companies can modify the balance of power.

Nonetheless, the trend towards outsourcing of military services seems to continue and the lack of international jurisdiction to deal with it may generate profound questions about monopoly of force and democratic accountability. In Colombia, such issues become even more blurred, since the largest contractor is a country outside the region.

Between War and Crime? Analysing Drug Violence in Mexico