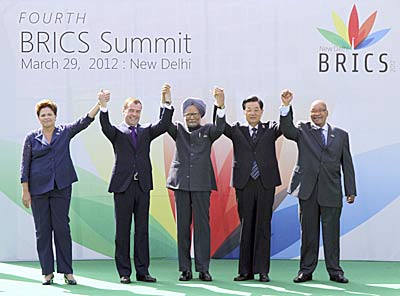 By Raj Verma, Africa Programme at LSE IDEAS, and PhD Candidate in the Deptartment of International Relations

The fourth BRICS Summit to be held in New Delhi, India on March 29 2012 is set to further consolidate the role and importance of this South-South grouping in international affairs. Amongst the many issues confronting, Brazil, Russia, India, China – and its newest member South Africa, perhaps none has quite the resonance of Africa. With trade, and investment from BRICS countries booming, there is a possibility that the dream of development in a region long neglected by the North may become realised. For India in particular, the long history of engagement has given its engagement a particular depth and meaning lacking in most of the other BRICS countries (with the notable exception of South Africa).

India’s relations with African countries date back centuries, and with varying degrees of importance. Africa has been part of India’s foreign policy since independence in 1947. However, since the beginning of the new millennia, India has again acknowledged the importance of African countries in global governance, and trade and cooperation with African countries has recently been scaled-up and publicised. India-Africa trade increased from $967 million in 1991 to more than $9.5 billion in 2005. From 2000 to 2009, Indian exports to Africa increased from $2 billion to $14.813 billion, and imports from India to Africa increased from $3 billion to $24.728 billion. India’s official foreign direct investment in Africa in 2008 was $2 billion[1]. India’s trade with Africa almost doubled to 7.7 per cent of its total trade between 1990/1 and 2006/7 in contrast to China’s current 3 per cent.[2] Thus, Africa is proportionately a more important trading partner for India than for China.[3]

India’s partnership with Africa extends beyond BRICS, and includes two other sub-groupings that are also used in the context of Africa: India-Brazil-South Africa Dialogue Forum (IBSA) and the BASIC group comprising Brazil, South Africa, India and China (BASIC) as well as the continental India-Africa summitry process.

The first India-Africa summit was held in April 2008. 14 African heads of state and leaders of eight African regional groups gathered in New Delhi, with their Indian host, Prime Minister Manmohan Singh. The hallmark of the summit was that India offered $5.4 billion credit to Africa, and it marked the zenith of India-African cooperation following intensified cultural, political and economic interactions between India and African countries.[5]

The second Africa-India Forum Summit, held in Addis Ababa from May 20 to May 25 2011, saw the Indian government take significant steps towards building ties with Africa. The focus was on trade and development. India also offered $5 billion of credit over three years and increased development aid for Africa projects making a statement that India is continuing to engage with Africa seriously.[6]

India can rightly claim that it has an edge over other developing countries in education, information and technology, and technology for tailor-made small and medium enterprises. It can impact African development through technology and skills transfer leading to human capital formation under the aegis of NEPAD rather than just providing financial aid and extended lines of credit. For instance in Uganda, Indian technology  led to nearly three times more electricity to be generated, from 300 MW to 1000 MW than had been planned at Karuma project. Another sector where Africa can benefit tremendously is health care and pharmaceuticals where the Indian government and private enterprises can be major players. India also provides a different model of development- a model of pluralistic, multicultural, democratic setup that suits the African counties with their myriad ethnic, linguistic, religious and tribal divisions.[8]

India has and can play a significant role in peace keeping operations in fragile and conflict ridden states in Africa. Since the inception of UN peacekeeping operations, India has displayed the capacity to make large contributions to UN peacekeeping activities in Africa. India has been a part of all the UN Peacekeeping Operations (UNPKO): DRC, Ivory Coast, Angola, Namibia, Somalia, Mozambique, Rwanda, Ethiopia, Burundi, Sudan and Liberia.[9] It is the third largest contributor UNPKO in Africa with more than 9300 peacekeepers deployed in various UNPKO in Africa. India’s contributions are unique in the context of professionalism, humanitarian concern, and gender sensitivity. Africa has the world’s least developed countries which lack infrastructure such as adequate roads, ports and airports. This makes initial deployment and subsequent movement a major challenge. Natural disasters and war have further degraded the continent’s already poor deployment conditions while diseases, including cholera, HIV/Aids and malaria are also a major concern. Despite these problems, India has proved to be a reliable peacekeeper and has taken on an unparalleled humanitarian role. Professional excellence of the Indian troops and the Indian contribution has been acknowledged and commended by many African political and social leaders. More Indian peacekeepers have lost their lives than any other nationality while serving with the UN in Africa.[10] The reasons for India’s involvement in UN peacekeeping operations in Africa are the de-escalation of conflict, creating an atmosphere suitable for reconstruction and development and safeguard its national interests. In future, India may well develop criteria that require a greater return on investment than has been the case over the last half century. A more tempered approach particularly in view of India’s global aspirations seems plausible.[11]

India and Africa can also cooperate on piracy of the coast of Somalia. To counter piracy, a working group has been set up to look into the economics of piracy and three ships of the Indian Navy patrol the Gulf, the Arabian Sea and the area near Seychelles at any given time. Moreover, India and Africa can jointly undertake active and aggressive patrolling, make the Djibouti Code of Conduct as legally binding as possible, make payment of ransom illegal, look at modalities of prosecution and expand capacities within the prisons.[12]

India and countries in Africa share similar challenges of dealing simultaneously with energy security, climate change and socio-economic development. Given that India and Africa will be one of the most vulnerable to the negative impacts of climate change and its variability, decision-makers in India and Africa are beginning to cooperate at a myriad of levels.[13] It would be naïve to expect countries to be driven by anything less than domestic stakeholders, national interests and local realities, but it is pertinent that they co-operate on mitigation, adaptation, on further improving projections and predictions of climate change data, deforestation and incentive mechanisms for best practice, technology transfer (especially renewable sources of energy of which India is a major producer) and capacity building, and  to cope with insecurity and climate-related development challenges. This will enable India and Africa to arrive at a multilateral agreement that is equitable and represents the development concerns of the developing world.[14]

India’s foray in Africa has led to improved impact on the terms of trade for raw materials especially oil, coal, metals and minerals. This has led increased prices for commodities. Consequently, African countries have greater export earnings and higher growth rates. Africa has been growing at approximately 6% for the last five years and provides a huge market for Indian manufacturing goods like textiles, pharmaceuticals, light machinery, transport vehicles like trucks,[15] and the Nano, a $2500 car, suitable for the African populace with its low purchasing power.

India’s relations with Africa are time-tested and historical. However, in recent years the affiliation has been revitalised. Both continuity and change feature in India’s evolving relations with Africa. India’s foray into Africa may be seen as a continuation of the past trend of supporting weaker allies. India and Africa can cooperate with each other in myriad fields in a symbiotic relationship as equal partners under the aegis of South-South dialogue. The cooperation should have a positive impact on the development aspects of India and Africa.

[2]Naidu, Sanusha (2010) “India’s Africa relations in the shadow of China?” in Cheru F. and Obi C. (eds.) The Rise of China and India in Africa, London and Uppsala, Zed Books and The Nordic Africa Institute.

[13] Chevallier, Romy “Facing the challenges of climate change: The case of South Africa and its potential collaboration with other Southern economies”, Konrad-Adenauer-Stiftung (KAS) 2011

This article has also appeared in an LSE sister blog, Africa at LSE

‘The President is dead, long live the acting President!’

Is Africa the new Persian Gulf? Not yet