Proposals for how the UK government intends to mandate open access for research assessment have been issued, along with the invitation for the academic community to respond. Meera Sabaratnam and Paul Kirby welcome the clarification on these policies and look ahead to what remains to be done to ensure an appropriate restructuring of the current publishing system.

Last week, the UK’s Higher Education Funding Council for England (HEFCE) published their formal proposals for including an open access requirement in any post-2014 Research Excellence Framework (REF). Responses to this will be accepted until 30th October 2013. These proposals follow a pre-consultation letter and set of responses which were submitted earlier in the year (link to University of Cambridge response).

Following up our concerns about the policy raised over the last few months (here and here, further posts here) the present iteration represents a decent outcome on some of the details, not least because it defers quite a few of them. That these issues have been deferred does not mean that they do not matter; rather it means that the battles on them will be fought elsewhere – with universities, with journal boards, with learned societies, with publishers and their lawyers and so on. Moreover, there is no cause for complacency around the broader political economy of scholarly publishing, which remains wasteful, restrictive and inequitable on many fronts. And of course, the pernicious REF exercise itself, which this government signalled it would review, must be itself vigorously contested (more on this to come).

The proposals are to require that any REF-submitted journal article or conference proceeding published after 2016 must be made available in the final post-peer reviewed version from an institutional repository at the point of acceptance (or publication). This in line with the previous agenda of RCUK and others, and maintains journal exclusivity by accepting substantial embargo times on truly open (read: public) viewing of these deposited versions. So a paper “immediately” placed in an institutional repository may still not be viewable for up to 24 months in the Arts, Humanities and Social Sciences (recall that this length of permissible embargo was extended in the face of publisher lobbying), although it may be possible to request papers directly from the author on an individual basis. This version of mandated open access is applicable only if the address line of the author is a UK HEI at the time of publication, and cases for exceptions can be made. HEFCE’s assessment that this should be broadly achievable under current provisions is reasonable, and represents a good path for opening up access to research under present conditions. From the perspective of maximising green OA, Stevan Harnad’s response is as ever highly incisive. Below are some reflections on the present state of play.

What Has Been Won and Deferred

First, the old green/gold battle is now (nearly) over, and with it the concerns that academics would routinely pay exorbitant author fees to have their research published. HEFCE does not require any proportion to be ‘gold’ and states that no preference will be applied in the assessment of research. All universities appear to be endorsing a ‘green-first’ policy (i.e. institutional deposit of a near-final version of the text), with author fees being paid only as a last resort to secure compliance. Particular journals and publishers will still exert market power in being able to set high author fees and long embargo periods, particularly in the short term, but these journals appear to be in the minority.

Although some publishers have been attempting to mislead their authors as to their actual rights to deposit for free by burying these conditions out of sight, universities should be able to clarify these on behalf of authors before any articles are submitted. Difficulties do remain, because the option of compliance via an author-pays route leaves open the possibility of journals retracting ‘green’ routes in future. Moreover, where funds do exist, there will be costs for universities in deciding who is sufficiently worthy of Article Processing Charges (APCs), and hierarchies between institutions (with some able to put more material out genuinely immediately in full Version of Record forms for interested publics). But the compulsion to pay threatened by a systematic APC model is no longer a threat.

Second, the licensing battle appears to have been deferred. This relates specifically to RCUK’s enthusiasm for a very permissive commercial, derivative re-use blanket licence to be applied to all research (CC-BY). Many scholars have responded with scepticism deriving from fears about re-purposing, inadequate attribution, royalty losses and dilution of the authorship, without any clarity over the exact benefits of the new licences, especially in arts, humanities and social science subjects. The current HEFCE proposals will allow authors and publishers to work within existing copyright and fair use provisions if they wish, which will likely satisfy the sceptics more than the enthusiasts. However, in the absence of any legal clarity about the actual applicability and impact of the new licences this seems a good outcome.

Third, prospective requirements for open monographs have been deferred. Anything other than this would have been pointless given the state of current infrastructure and understanding.

Fourth, a requirement for open data has been deferred, for similar reasons of infrastructure. It is of slight concern that the document still fails to recognise the highly differentiated characteristics of ‘data’ that different disciplines and researchers use, but this battle will be have to be fought later, if it is fought at all.

The consultation seeks responses on whether the requirement should be applied universally or as a percentage, and whether upon acceptance itself or publication. Harnad’s recommendations for a universal requirement upon acceptance are reasonable if the case-by-case exceptions are made generously in favour of protecting academic freedom and equality. It is vital for anything approaching genuine open access that ‘acceptance’ date be the metric. It is not unusual for years to pass from acceptance to final hard publication, and this ambiguity allows journals to retain still further exclusivity rights even once a piece is available online (pre-hard publication) in a Version of Record form. For example, one of us (Pablo) had a piece accepted in August 2011 which is still not out in hard copy, even though it has been available online first since February of last year. Add a 24 month embargo period to an example like this, and the effective embargo becomes four years. Depending on the backlog of articles, this could be even longer (and bear in mind here that we are not even talking about eventual access to the journal-formatted version, just to a ‘post-review’ one)

What Is Still To Be Fought Over At Large

The concerns we raised in our earlier papers on open access have not gone away, but now need to be fought on different terrains. We still want the right to have the Version of Record as the version which is made open access. Most publishers will not agree to this but some will – for example this is the case with most Cambridge journals. Academics must pressure journals and publishers for this right, and urge journals to migrate to publishers who will enable the maximal author rights in this regard. This matters because all of the various concessions to publisher rights (embargoes, non-formatted post-review versions, having to specifically request an article from a repository, confusion over exact publication date) all erect barriers to easy public access. Researchers may be confident about the distinctions, but how many journalists, practitioners or concerned citizens are knowledgeable enough about the different iterations of a paper to know that yes, this here version is a reliable reflection of valid academic knowledge (leaving aside the vagaries of review and certification themselves). Equally, we should work for the minimisation of embargo periods, particularly those which do not protect learned society funding but only large publisher surpluses and editorial perks. Hard and soft boycotts and pressure on editors should be maintained here.

We must make sure that universities are allocating any funding that they have for publication fairly, and that these allocations are not interpreted as authoritative judgements of academic merit by those who are not in a position to give it. The best guarantee of this is for institutions to pursue a policy of funding publications as an absolutely last resort, based on the availability of money and nothing more. In fact, where possible, universities should spend their funds on alternatives to author fees rather than their payment. They are already entitled to do so to some extent with RCUK funds, which can be spent on open access initiatives and strengthening of repositories, as well as on APCs. Attempts to ‘cherry-pick’ authors and researchers to qualify for publication funds will be time-consuming, divisive, unjust and pointless. It may also produce research skewed towards the bureaucratic preferences of these committees and their personnel rather than the best research question. Yet some universities have announced just these policies. We must expose and challenge such policies where they exist.

Finally, we must keep collectively pushing for alternatives to the current publishing system, which continues to sell the products of our free labour back to us at extortionate prices. A non-profit and/or endogenised publishing system which hosts our journals at cost-price and is able to exploit economies of scale is the best guarantee of this in the long run. Various innovative independent projects are underway but UK universities and research libraries themselves need to make this a long-term collective institutional project that we ourselves own and run.

This originally appeared on The Disorder of Things and is reposted with the authors’ permission.

Meera Sabaratnam (@MeeraSabaratnam) is currently Lecturer in International Studies at the University of Cambridge, and from September will be Lecturer in International Relations at the School of Oriental and African Studies, University of London. Her work is primarily on issues of Eurocentrism and postcolonialism in international politics, with particular reference to the ‘liberal peace’. She received her PhD from the International Relations Department of the LSE in early 2012, and is a contributor to the global politics group blog The Disorder Of Things (http://thedisorderofthings.com). 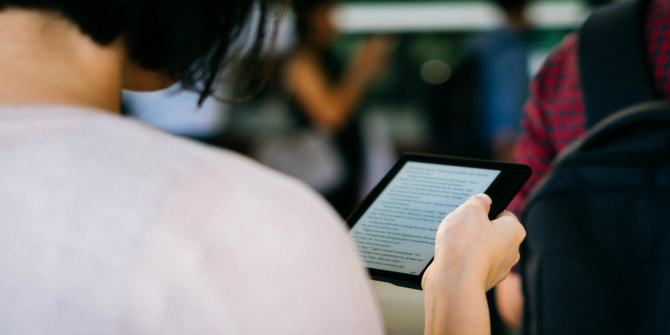