An impact-driven scholarly communication system may offer new levels of views for research and new metrics to assess these works, but are the upheavals actually reinforcing the cumulative advantage of those already in power? Drawing on Robert Merton’s norms for the production of science, Avtar Natt reframes current scholarly developments and finds the roots are too deep for a fair and equal system of knowledge production.

In 1942 Robert Merton wrote ‘Science and Technology in a Democratic Order’ which he later published as ‘The Normative Structure of Science’ in The Sociology of Science (1973). Merton’s paper is a reaction against totalitarianism threatening science but the key element of it is the proposition of four institutional imperatives that make up the ethos of modern science. The Mertonian norms (also known as CUDOS – Communism, Universalism, Disinterestedness, and Organized Scepticism) may be off-putting for some due to the reference to science or because of Merton’s functionalist sociology being seen as prehistoric. What I believe overrules the criticisms and makes the Mertonian norms so enriching is that they can act like a moral compass for the knowledge worker. They are a framework giving us the opportunity to reflect and compare how we currently are to how we could have been.

My aim is to reframe the Mertonian norms to the present day where demonstration of impact is seen as a necessity to survive in the scholarly communication system. Overlapping all of this, I will draw upon Merton’s 1988 paper on the Matthew Effect and Cumulative Advantage.

Communism (all new knowledge should be in the public domain) – Communism corresponds with the conventional publication system already in place. Peer recognition is sought which incentivises people to go through the academic publication route. Commercial gain and competitiveness complicate this process with embargoes for journals and affording journal subscriptions instantly coming to mind. According to SCONUL library statistics in the UK, from 2010-2011 the top ten serials budgets were from Russell Group institutions averaging approximately £4m per year. The worldview and demands of resourcing a research intensive institution such as these will differ significantly to poorer academic institutions that are often doing their best to survive. Consequently, a Library Director from a Russell Group institution may advocate open access with one hand but with the other have no choice but legitimise the pricing models academic publishers have in place. Competitiveness and the identification of peer interests rather than communal interests make dramatic change unlikely. The only saviours to the current state of play is Green Open Access or groups working together to unlatch journal access.

Universalism (it doesn’t matter what you are or where you are from) – Surrounding a journal article there is information concerning one’s name, institution, job title, publication and gender that can go for you or against you. It is this murky area between implicit discrimination and evaluation that we often occupy. For those on the receiving end, the system surrounding journal publications and peer review is another target. There should always be gratitude to esteemed colleagues that spend time on something not theirs. The other side to that however are editors and reviewers that steer you to playing their notes in their particular order, are classless with comments or look after their own. Thus, a socially acceptable form of coercion can occur where the author acquiesces to ensure publication. The author is hardly a saint and the perfunctory citation plus other forms of gameplaying are tactics that can appease gatekeepers. It is hardly surprising, when authors surrounded by workloads and too much information see efficiencies of canonised things, be swayed by the distinguished, rely on quantitative measurements or close ranks and rely on their network (especially if they have power).

Disinterestedness (interests should not get in the way) – Self-aggrandizement and competitiveness are the two things that stick (thanks to Merton) here. Institutional control over science can dare to be explicit but internal politics, revenue streams, ranking, reputation and faculty constraints are the subtle forms of institutional control that come to mind. There are also invisible colleges, cliques and what Merton calls prolific but trivial publications to consider. The incorporation of impact amongst academia is little more than a socially acceptable synonym for interestedness. I make this statement not only because disinterestedness is the most idealistic of Merton’s norms but because promoting and demonstrating impact is necessary for the underdog. Constructing oneself by making the most of digital information flows (new altitudes), increasing reach and being the ‘have you also seen’ is nothing more than publicity in a competitive marketplace. The unintended consequence of this path, is if everyone is cranking their digital footprint up to eleven, won’t the next generation of researchers obfuscate rather than distinguish?

Organized Scepticism (scientific produce should be open to scrutiny) – Merton views organized scepticism as the norm that interrelates with the others due to peers being those most suited to scrutinise. OECD statistics steers one to think that there are more roadworthy people that support organized scepticism than ever before. If this large group do not have a spot then they have to carve one for themselves. It is then sound thinking that the next generation of researcher be in tune with various forms of publication and different forms of peer scrutiny thanks to open access. Where discomfort lies, is with the risk of there being a swarm of publications with a varying degree of organized scepticism due to a lack of mingling. If one is to stick with the belief in universalism, then all of these new forms of publication and peer review deserve their spot in the hope of perpetuating upward and downward mobility.

In conclusion, what grates is how things like those mentioned above are rubbing against a scholarly communication system. Those at the bottom might see an unequal system and those at the top might be genuinely supportive (and these people do exist) but they are hardly going to vacate a position they have worked longer for than an early career researcher. It is for this reason why cumulative advantage processes resonate so much to me. Simply put, cumulative advantage refers to how advantages and opportunities like resources, location, network of influence or training tend to lead to further advantages. For example, a Lecturer bagging a post at an elite institution is likely to receive further advantages than say, a Lecturer taking a post near the bottom of a university ranking table. The stars do not line up for everyone and missed potential of the underdog (who I consider to be early career researchers as well as the late bloomer) a manifestation of cumulative advantage.

Open access can be thrown into the ring as a potential game changer and I would steer readers to read more about the Matthew Effect (a phenomena which Merton coined) and the relationship it has with open access. My cynicism is based on the futility that all we are experiencing is realignment and that all this new stuff will end up supporting those with power eventually. Soaring to new altitudes and using new things like Altmetrics or inflating the value of hits (when compared to the citation) are valuable but could they be little more than case studies of cumulative advantage processes if one looks hard enough? Furthermore, if demonstrating impact is to be a key value in the next generation of researcher then perhaps we need to be mindful of the type of people we are to construct? The roots are too deep for a fair and equal system of knowledge production but Merton’s message can be seen as a warning of what could happen if we go too far.

Avtar Natt is an Academic Liaison Librarian at the University of Bedfordshire. In between stints in academic librarianship, he was a Researcher for an investment bank. His interests overlap his background in sociology and information science. His wife thinks he worries too much. 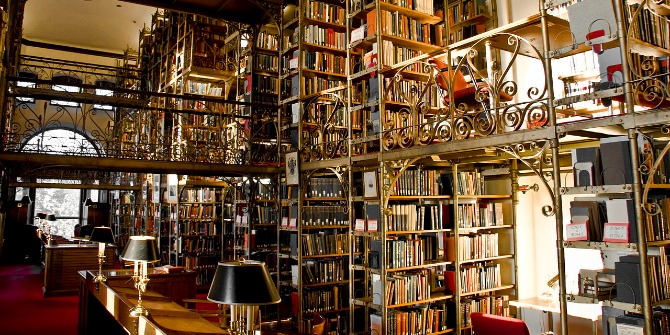