Across all disciplines, the course of determining authorship does not always run smoothly. Emma-Louise Aveling and Graham Martin argue that with funders pushing for wider collaboration, dilemmas about how to allocate authorship fairly is set to intensify. They present guidelines for research teams to consider. To ensure all decisions remain transparent, start discussions on authorship credit early on in the research process.

If there’s anything actors get their egos in a twist about, it’s who gets top billing in a play or movie. If there’s only one big star, it’s easy, but what if there’re two or three?  Well, there’s staggered but equal billing – where the name on the left is placed lower than the one on the right – or a triangle. If it’s an ensemble cast, the names might be listed alphabetically.. Then there’s the uncredited role, which in itself is a badge of honour – a really famous face doesn’t need to be named, right?

‘Billing’ on academic papers can be just as fraught: authorship order can make a big difference to academics’ careers. Researchers argue over who should be listed as an author on a paper and who shouldn’t, and then over where everyone should go – first, second, third and so on, until last. In the social sciences, the first author is usually the one who designs the study, carries out or oversees most of the research, and possibly does most of the writing and editing of the manuscript. Being first author is thus an indication of who should get most credit for the research being reported, and is regarded as the most prestigious position. The list of trailing co-authors reflects, typically, diminishing contributions to the work reported in the manuscript. The authors who follow on may have collected or analysed some of the data, or helped to write the manuscript, or some sections of it.

However, in other fields, such as medicine and the natural sciences, authorship positions have different connotations. For example, while the first author is likely to be the researcher who did most of the actual research (e.g. conducting experiments), the last author position does not connote the smallest contribution, as it does in the social sciences. Rather, the last author will probably be the person who made a large research project happen in the first place – getting funding, running the lab that produced the research, establishing collaborations. In the natural sciences, then, the first and last authors are the ones who really matter.

There are good reasons for concerns over authorship, egos aside. An extreme example is that of the scientist Jocelyn Bell, who discovered radio pulsars in 1967. Some people think she lost out on the 1974 Nobel Prize for Physics because on the paper announcing the findings Bell was listed as second author to her supervisor (and winner) Antony Hewish. Recently, close to home, historian Dr John Ashdown-Hill of the Richard III project claimed that our university (Leicester) failed to acknowledge his crucial contribution to the discovery of the king’s remains (the university denies this).

More prosaically, a good track record of first- or last-author publications can determine pay, promotion, even public recognition. The Big Bang Theory and the Piled Higher and Deeper comic strip satirise the importance academics attach to authorship position. More seriously, though, ‘gift authorship’ (listing someone as an author who did not actually contribute to the research) or ‘ghost authorship’ (missing someone who should have been an author off the list) risk undermining the integrity of the research itself, or even discrediting academic research more generally if such falsification or exploitative practices are seen to be rife.

We expect more discord. Researchers working in the natural sciences are used to collaborating on papers involving dozens, even hundreds of authors. But in the arts, humanities and social sciences, single-authored papers are common and – crucially – traditionally considered more prestigious. That’s all changing: public funders are increasingly looking at the impact of research on wider society when allocating grants – and they like research between different disciplines, across international borders and with other professions. Within the field of health, where we work, there’s been a push towards collaborative global research from funders such as the Wellcome Trust Major Overseas Programmes and the Gates Foundation’s Grand Challenges.

While such collaborations bring many advantages, they can also intensify dilemmas about how to allocate authorship fairly for research groups like the one we work with, SAPPHIRE (Social science APPlied to Healthcare Improvement REsearch). We conduct studies that are applied in focus (e.g. evaluating patient safety interventions) but use social science theory and methods. We work on large projects involving multiple researchers (academic staff and contracted researchers and health professionals) in different roles – as principal investigators, co-investigators, research collaborators, data collectors, data analysts and project managers, not to mention all the other tasks involved in the actual drafting and re-drafting of reports and academic papers.

We like to think of ourselves as fair-minded and supportive of our immediate colleagues and collaborators elsewhere, but as in so many academic centres around the world, the course of (true) authorship does not always run smoothly. We found ourselves faced with a number of dilemmas at the start of a big project. How would we weigh up the contribution of someone who had done hours of painstaking data coding and analysis versus another with good language skills who has written and edited large parts of the manuscript?  What do we do about a project manager who is particularly efficient, organised and tech-savvy, who gets lumped with administrative duties and so doesn’t get the opportunity to make a ‘contribution’ worthy of authorship?

Our position as group of (mainly) social scientists publishing in applied fields of healthcare and medicine exacerbated the dilemmas. Junior researchers – often fresh from the singular pursuit of a social science PhD, pumped full of careers advice that chances of a permanent job rested on proving their academic mettle through single-authored or first-authored papers – brought one perspective. More senior researchers – with greater experience of the work that went into making a large research project happen in the first place (often before junior researchers had been recruited) and of producing papers that would be accepted by a highly ranked international journal – brought another. Our colleagues and collaborators in medicine, yet another…

Wanting to avoid the potential for discord, we looked at existing guidelines from a number of associations, from the British Psychological Society (BPS) to the the International Committee of Medical Journal Editors (ICMJE), and found them wanting. The different guidelines were not always consistent, and where they were – for example, in insisting on a ‘significant’ or ‘substantial’ contribution – they lacked guidance on what actually constituted a ‘significant’ contribution. Most lacked specific guidance on authorship order. So we set about a process of developing and reaching consensus on our own guidelines for authorship. We viewed it almost as a research study in itself: over nine months we synthesised existing guidelines (our literature review), we went through a set of scenarios, each of which described a real situation where authorship allocation was not straightforward (our methodology), we drafted an initial set of authorship guidelines and good practice tips (our findings), and we arrived at a set of principles (our conclusions) which we think could form the basis of future fruitful collaborations.

Here’s what we recommend:

Ah, but here’s the rub – did we follow our own advice? For the principles, we agreed that as everyone in the group at the time had participated in the process, and, as far as possible, consensus was reached, everyone should get a ‘byline’, with the person who led the guidelines first, and others (who had contributed roughly evenly) in alphabetical order thereafter. This article had three authors: Emma-Louise, who generated the piece, Christine, who turned these thoughts into journalism-speak, and Graham, who (as the academic saying goes) critically reviewed the text and made substantive contributions. As academics, Emma-Louise and Graham share the byline. Our communications person, Christine, isn’t an academic and so doesn’t get a byline in this context.  All amicably agreed over a drink at the pub. If only it were always so easy.

Dr Emma-Louise Aveling is a Wellcome Trust-funded Research Fellow at the SAPPHIRE Group, University of Leicester and a Visiting Scientist at the Harvard T.H. Chan School of Public Health.

Graham Martin is Professor of Health Organisation and Policy at the SAPPHIRE Group, University of Leicester. His research interests cover organisational change in health and social care, and he occasionally tweets from @graham_p_martin. More on his research can be found here. 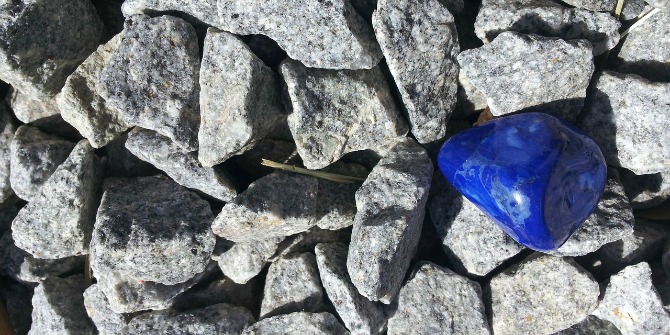