Is a television programme the format least suited to the communication of complex scientific ideas? Clara Florensa, Oliver Hochadel and Carlos Tabernero discuss a conference that brought TV producers and theorists together to engage constructively on the topic. Simplification, trivialization and even distortion are the accusations regularly levied against science on screen. But this view misinterprets communication as a top-down process, when in reality, audiences are interacting with the material in a number of different ways. Academics should consider the narrative strategies for their research and foster enriching dialogues with media professionals.

Science on Television sounds like a contradiction. How can a medium in need of appealing visuals, and a “good story” represent a highly complex, esoteric and allegedly slow and dry practice? Where is the action, suspense and emotion in a row of test tubes and an incomprehensible equation? For scholars of science studies and the history of science this is an intriguing tension. Therefore we organized an International Spring School on “Science on Television” in 2013 (in Minorca, Spain) whose papers have just been published as a special issue of Actes d’Història de la Ciència i de la Tècnica (in English). In order to address this tension head-on we invited academics as well as TV producers to discuss. In short: theory met practice.

Looking at the history of science popularization since the first public lectures on Newtonianism in the early eighteenth century, “Science on Television” seems to represent the ultimate clash between well-meant instruction and mere spectacle. Over the centuries the basic criticism has remained the same: Superficial amusement of the senses will triumph over the subtleties of science. TV is good at moving people, exciting us, making us laugh – in short: to entertain us. And therefore a visual medium such as television may be the form least suited to communicating science. Simplification, trivialization and even distortion are the accusations regularly levied against science on screen.

Yet caution is called for: This view of science popularization considers communication as a one-way, top-down process. It assumes (and simultaneously legitimates) the authority of a minority of experts, and the necessarily passive reception and acceptance of this knowledge by a purportedly ignorant general public. Yet, as both TV practitioners and historians of science know, audiences are diverse and every viewer appropriates a nature documentary or a science feature in his or her own idiosyncratic way, determined by their own worldview, predilection and preoccupations. At the same time producers such as David Dugan notices a growing understanding on the part of the scientists for the need to engage the public in an entertaining and informative way. This disposition of the scientists to cooperate with the media or even to actively approach them has been described as the “medialization” of science by sociologists of science.

The discussion at the Spring School and the subsequent publication clearly showed that neither are practitioners theory-blind (or ignorant of the historical dimensions of their craft) nor are academics unaware of the concrete conditions (limitations of time and money, demands of the audiences etc.) under which science programs are produced. Our authors are highly reflective of their own work and the role they are playing in this complex dynamic. In other words: theory and practice did not clash. But in how far did they actually “meet”?

As it turned out practitioners have their own kind of theory and they call them recipes or tools. These instruments are crucial in order to turn scientific content into a televisual format. A science program needs rhythm, clear explanations based on metaphors, analogies, visuals as well as a gripping narrative. Powerful images are paramount. The more relevant the topic is to the every-day-life of the audiences, their experiences but also their preoccupations, the better. To portray scientists as human beings, i.e. with passions and even mistakes, helps the viewer to empathize with them. And if you as a producer attempt to pitch a science program to a TV station, better avoid the word “science” and speak of “adventure”, “passion” and the “secrets of life”!

What are the main lessons of our encounter with the practitioners? To put it bluntly: Science on TV is only TV. It has to obey exactly the same rules as any other type of content. It is all about viewing figures and ratings. Or put it in yet another way: form (the medium) beats content. Academics know that too. Lehmkuhl argues that “edutainment” (as opposed to more traditional ways of popularizing science) has the greatest potential in European television because it may easily be adapted to well-established TV genres “such as the family show, the quiz show and even reality TV” regardless of the actual science content.

Can academics learn anything from practitioners? Certainly: if you want to reach your audience you need to tell a good story. And even in our culture of words and arguments the potential of images is enormous but severely underused. The diversity of experiences and points of view in this dossier on “Science on Television” shows the clear intention to continue the dialogue between “theory and practice”. We academics need to think about the narrative strategies of our own craft in order to foster an enriching dialogue with media professionals and their productions – because there is indeed room for engagement.

Clara Florensa is currently a PhD candidate at the Centre for the History of Science (Autonomous University of Barcelona). Her research deals with science communication policies during Franco’s dictatorship in Spain, specially focusing on evolutionary theories.

Oliver Hochadel is a historian of science at the IMF-CSIC (Spanish National Research Council) in Barcelona. His research focuses on the relationship between science and its publics.

Carlos Tabernero is a researcher and lecturer in history of science at the Centre for the History of Science (Autonomous University of Barcelona). His current research includes media, screen studies and processes of communication and popularization of science. 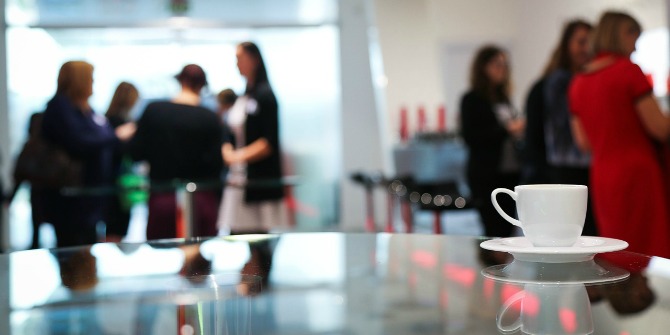