It has become a tradition on the Impact Blog to look back at the end of the year and share a round-up of our top posts. Managing Editor Sierra Williams delves into the Google Analytics and provides a list of the most viewed pieces along with a wider look at our top tweets and our most captivating posts (minutes per page) on the LSE Impact Blog in 2015.

We are thrilled to announce we reached a particular milestone this year – over 1 million pageviews between January 2015 and December 2015! This was a 36% increase from 2014. With an average weekly readership of over 20,000, we are looking forward to building on 2015’s success and exploring more engaging topics on the impact of academic research in society, the sharing and dissemination of evidence, and the future of scholarship. Over the next week we will be sharing a few more ‘Top Posts’ lists according to more specific themes, so do stay tuned. 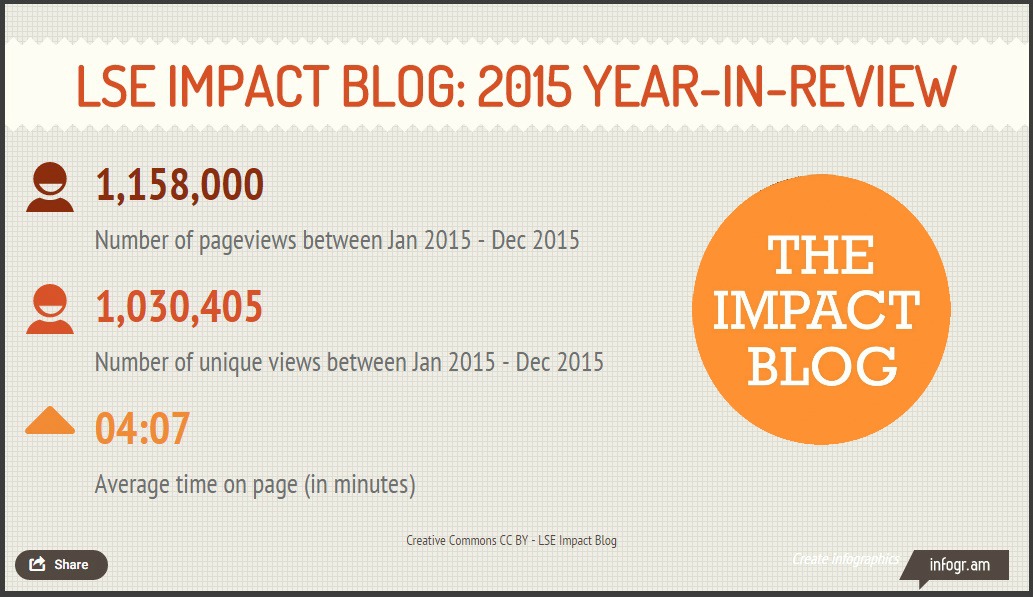 Scholars all around the world are almost solely judged upon their publications in (prestigious) peer-reviewed journals. Asit Biswas and Julian Kirchherr argue that publications in the popular media must count as well.

The imagined slowness of university life has given way to a frenetic pace, defined by a perpetual ratcheting up of demands and an entrepreneurial ethos seeking new and quantifiable opportunities. Mark Carrigan explores the toxic elements of this culture and its underlying structural roots. As things get faster, we tend to accept things as they are rather than imagining how they might be. But the very speed of social media may act as a short-circuit. The limited investment necessary means that social media can allow the imagination to thrive.

On the Impact Blog, we take great care in the curation and creation of engaging social media content. According to our Twitter Analytics, these were the tweets that ranked highest in terms of engagement and impressions.

On academic freedom and the unspecified responsibilities that come with positions of authority http://t.co/kIcJjtbJgt pic.twitter.com/UlvHGPjtPh

Types of impact metrics tracking how research has been used – Figure from #HEFCEmetrics report http://t.co/IX71u4lD27 pic.twitter.com/5wrgtIYwjZ

How can your research have more impact? 5 key principles and practical tips for effective knowledge exchange. http://t.co/y170sRfuu4 #jobsQ

Researchers on permanent contract 3x as likely to have policy impact than those on temporary http://t.co/6WEqz4iTvz pic.twitter.com/OH8AojCJAU

Another metric we have been following closely this year is minutes per page. In a competitive online attention economy, with readers arriving from so many different devices and sources, we find this stat useful as it points to content that people have found particularly engaging. All of the below pieces had an average min/page measurement of over 6 minutes 30 seconds.

Dutch universities plan Elsevier boycott — will this be a game changer or will publisher profits remain unaffected?

Led by vice chancellors, Dutch universities have recently announced plans for a country-wide boycott of the academic publisher Elsevier. Such a boycott has the potential to be a significant game changer in the relationship between the research community and the world’s largest academic publisher. But how will it affect open access momentum in the UK and around the world?

From literature searches to collaborative online writing, a significant amount of the research process now takes place online. Andy Tattersall provides a list of useful Google Chrome extensions that can be added to the browser to help facilitate the daily academic workflow. Recommendations below cover tools for reference management, link saving, and finding quick access to academic articles.

The way much research on sexual differentiation is conducted and communicated has come under intense criticism from scholars in both the natural and social sciences. Cliodhna O’Connor describes how traditional gender stereotypes are projected onto scientific information and its subsequent reporting.

The weight placed on p-values and significance testing has come under increasing criticism, with one social psychology journal banning their use entirely. Nicole Radziwill argues that many of the issues come down to sampling errors. Using the statistical programming language R and data on grade point averages, she demonstrates just how easy it can be to accidentally draw wrong conclusions and what can be done to fix this. 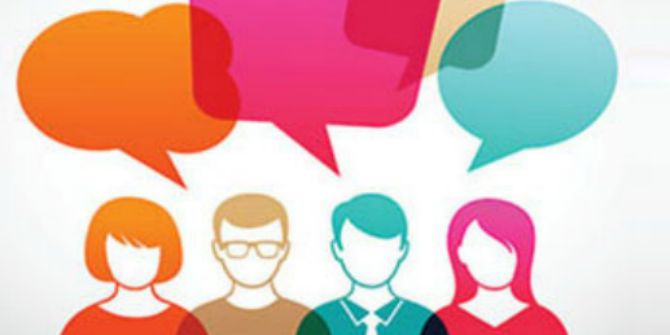