In the context of Trumpism and the victory of fast emotions over the slower pace of reasoning and education, Dick Pels hails the unique perspective encouraged by science; the ability to slow down, freeze-frame, and dissect things, liberated from the demands of urgency, immediacy and publicity. However, this should not detract from the existence of temporal diversity within academic life, or the importance of the power to define and decide about tempi of change and master one’s own pacing.

This post is part of the Accelerated Academy series.

In a liberal-democratic society, the separation of powers and institutions is also a separation of times. Institutional orders such as finance, industry, the media, the democratic polity, the arts and the university work to different timetables and enable different rhythms of social interaction. Today, an unholy tandem of fast capitalism and fast media drives an acceleration which threatens the slower pace of democratic deliberation and cultural creation. Defending a liberal-democratic society against the authoritarianism of speed therefore requires us to preserve these temporal checks and balances, not merely between different social fields but also within them.

However, there is also a potential authoritarianism in slowness: the weight of tradition, the rut of stagnation, the romance of nostalgia. Fast and slow are “essentially” contested concepts which have an intensely performative and political impact; each, moreover, displays an intriguing Janus head. In his book, Accelerating Academia, Filip Vostal carefully avoids one-dimensional privileging of either slow or fast, in order to emphasise their inherent normative “duality”. Acceleration and deceleration can be both enabling and constraining, both promise and tragedy. This “dialectical” departure opens up towards an ethics of moderation which is perhaps best expressed by the late Dutch philosopher Lolle Nauta, who used to quip that “the good and the bad sit in the same room, if not on the same chair”. 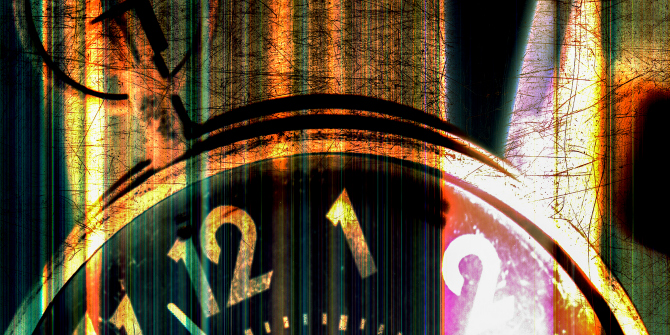 Image credit: Clock by Alexandra Bilham. This work is licensed under a CC BY 2.0 license.

This idea of duality hence introduces an ethic of modesty and balance, of openness to positive uncertainty, criticism and self-relativisation, without (this needs some emphasis) selling out to bad relativism by undercutting our capacity to further the good and fight the bad. Hence, with all dialectical nuance entered, Accelerating Academia still heralds a critical slowdown of the over-accelerated university, not with a view to abolishing all fast practices within it, but to de-escalate the pressures of a market-driven acceleration “running wild” which threatens the good work and wellbeing of many teachers and researchers.

Let us briefly sidestep to the electoral victory of Donald Trump. May a dialectical approach to speed yield something interesting here? As a backlash against the runaway pace of neoliberal globalisation, Trumpist populism appears to unearth some of the deepest contradictions of “liquid” modernity, marking the revenge of the slow (the losers) on the fast (the winners). On the one hand, Trump epitomises the highest speed of fortune and fame, the victory of fast emotions over the slower pace of reasoning, fact-finding and education, of twittering over reading books – what dramatic contrast to Obama! – of the art of bluffing and lying, branding and celebrification over the world of learning, culture and the arts. Trump also personifies the “decisionist”, intuitive, authoritarian leader, who knows that intimidation and domination are fast, while listening to others, democratic deliberation and invoking checks and balances are slow. His performance illustrates some of the intrinsic connections between speed and violence (although slowness may come with its own type of violence), as well as the gendered nature of speed, which is traditionally associated with male dominance, aggressiveness and power, while femininity is often linked to its opposite.

On the other side of the dialectic, Trumpism promises security, protection, stability, and hence a systematic deceleration of economic, occupational and cultural changes which are moving too fast and breed insecurity and anxiety for too many. It is about installing speed limiters such as protective trade barriers, building walls which must stop the flow of migrants, and defending white male-dominated cultural traditions against multiculturalism, feminisation and cosmopolitanism. It is about slow and stable identities which provide an anchor in the vertigo of change, such as male chauvinism, national pride, religious belief, suburban and rural security versus the rush of the metropole, and the saunter of the elderly versus the speed of the young.

If Trumpism demonstrates that lies, bullshitting and fraud are fast and truth, facts and nuance are slow, there might still be some traction in the basic proposition of my book Unhastening Science (2003), which identifies slower motion (with emphasis on the comparative degree) as a uniquely distinctive and valuable feature of scientific work, both as an institutionalised social domain and an internalised habitus. Recall the physical setting of the original Platonic/Aristotelian academy, the archetype and ancestor of our modern university (and of the dialectic) at a distance of a few miles northwest from the Athenian agora in the countryside beyond the Dipylon Gate. Today it still survives as a green tree-filled island (the “groves of academe”) within a less attractive neighbourhood called Akadimia Platonos. The scant remains of the historic academy still bear witness to the primal need for both spatial and temporal withdrawal from the hustle and bustle of the agora (which was both a market and a political venue), clearing a relatively secluded space in order to secure an unhastened pace of walking, talking, thinking, questioning and criticising.

My central purpose in the book, to be sure, was not to essentialise about truth being slow, but to make a radical point about social epistemology: science is “nothing special” in terms of venerated philosophical criteria of demarcation (and of cognitive superiority) such as truth, logic, right reasoning, disinterestedness, objectivity-as-neutrality or value-freedom – the traditional epistemological foundations of the ivory tower. Science has irreparably lost this transcendental aura, and is now special only as a result of the unique perspective yielded by its pragmatic spatial and temporal distanciation from faster practices in markets, polities and media. Slowdown encourages a uniquely different view, since unhastening permits scientists to freeze-frame, to zoom in on the fine details, to take things apart and study them one by one, liberated from the demands of urgency, immediacy and publicity which are imposed by more speedy cultures.

This general proposition does not detract from the existence of temporal diversity or time pluralism within academic life itself or the value of cross-fertilisation between fast and slow tempi. In this context, I cannot support Pierre Bourdieu’s romantic generalisation (in On Television) that “you cannot think when you are in a hurry”, because time pressures merely yield banal, common or conventional ideas. A sense of urgency may also enforce intuitive problem resolutions (the deadline as self-inflicted “speed prison”, or the emotional pressures of being interviewed). Producing new thoughts often requires doing (a little) violence to yourself.

Taking back control (of time)

Hence the importance of the power to define and decide about tempi of change, to be master of your own pacing, of your rhythms of life and work. “Taking back our country” in cases such as Brexit and Trump, is also about taking back control of time, about temporal autonomy and self-determination, about the ability to change gears, to scale up and slow down if desired. Hence time autonomy is an ideal which has a much wider appeal and significance than for academia only. It is crucial for being able to enjoy genuine freedom and self-determination, and forms the heart of what Juliet Schor calls “plenitude” or the fullness of life. In our present context, this demand clashes with the dominant instrumentalism and short-termism of a neoliberal productivist ideology which fatally diminishes the unique contribution of science (and of the longer view in general) to social life. As in the liberal-democratic polity, academic freedom requires the installation of temporal checks and balances which prevent the domination of the fast and furious and the shrinking of longer-term perspectives and projects. In this Trumpian moment, the current predicament of the academy and that of a democratic society threatened by the populism of markets, media and celebrity politics is largely the same, which should make us think twice about Hartmut Rosa’s hyperbolic slogan that “acceleration is a new form of totalitarianism”.

Dick Pels is a Dutch sociologist and freelance political writer. His most recent book A Heart for Europe: The Case for Europatriotism is available as a free download from www.dickpels.nl

Leave a Reply to Looking Through the Periscope of the Online World. | Gaminggoodness Cancel reply