The proportion of multi-authored papers in the social sciences has risen steadily over recent decades. But what are the reasons behind such a marked increase? Lukas Kuld and John O’Hagan consider a number of explanations, from increased academic specialisation and more affordable communication and travel, to the pressures of publication and an inclination among authors to spread the risks of research assessment across a number of articles. These trends also pose an interesting academic policy question: to what extent should academic hiring and promotional bodies apply a discount for articles with many authors?

The proportion of multi-authored papers in the social sciences has risen over many decades. For example, among the ten top economics journals the proportion of co-authored articles rose from a tiny three per cent in 1945, to ten per cent in 1960, and to 30 per cent in 1976. By then single-author papers still accounted for around 70 per cent of the total, with the vast majority of co-authored papers having just two authors. What has been the position since and what are the academic policy implications, if any, of these trends?

Figure 1 provides the picture of overall recent trends, based on over 250 of the top-ranked economics journals, covering almost 175,000 articles (Kuld and O’Hagan, 2018). As recently as 1996 single-author papers still accounted for 50 per cent of all articles, but this number had dropped to just over 25 per cent by 2014 (compared to around 90 per cent in the 1960s). 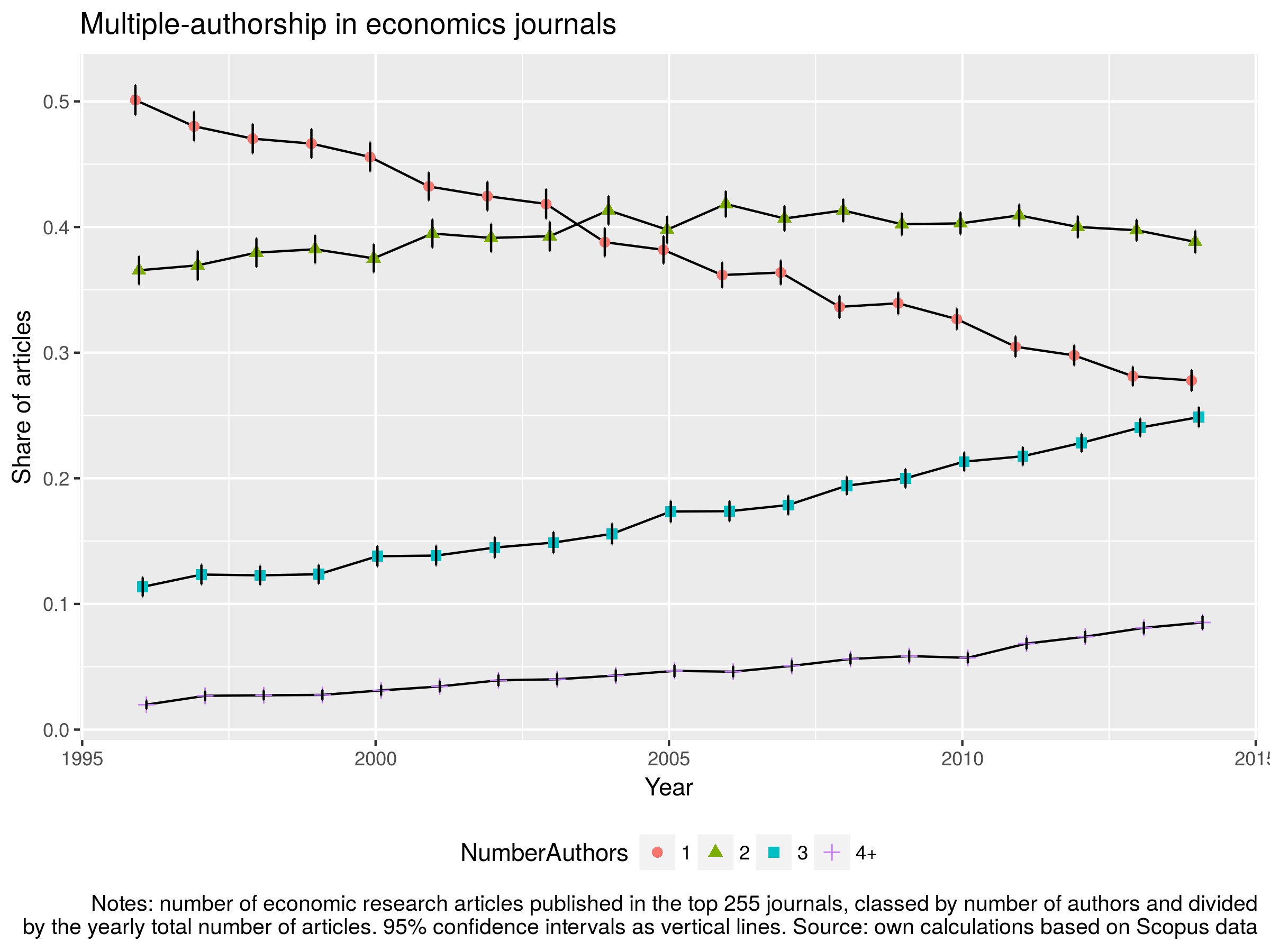 These marked trends are in themselves of interest to economists, and social scientists in general given that remarkably similar trends are evident across the social sciences. One issue of particular policy relevance, however, is how academic hiring and promotional bodies and funding agencies have responded to this change in publication patterns. For example, to what extent, if at all, do they apply a discount for articles co-authored with, say, four or even six researchers? We will return to this issue later, once the suggested explanations for the above trends have been considered.

Attempts were made in the 1980s to explain the steep decline in single-author papers over the previous 30 years. The main argument used then, and by others since, is that individuals engaged in social science research find it increasingly possible (and, indeed, necessary) to specialise in more narrowly defined areas. As this has happened, it’s become increasingly necessary to combine the skills of two or more scholars in the conduct of research projects. These early papers, though, were primarily talking about duo-authored papers, with no real mention of higher numbers of authors. Besides, the detailed empirical analysis of our dataset does not provide any strong evidence for this specialisation hypothesis.

Another argument is that the increasing emphasis on publication in refereed journals as a criterion for appointment and/or promotion allows less time to assist colleagues; the “reward” of an acknowledgement or “thank you” being replaced with the offer of co-authorship to elicit such assistance. This is the opportunity cost of time hypothesis but it depends crucially on whether or not a discount is applied to papers with more than one author. One would be very reluctant to add token or “thank you” names if a discount factor did apply. Again, no evidence was found in our data to suggest that this practice has increased over time.

The internet and cheaper flights lowered the costs of communication and, subsequently, made co-authorship between distant researchers more possible. Our evidence does indeed show that the rise in international co-authorship was much more marked than the overall rise. But such developments may just have increased the options in relation to co-authorship, and hence the nature but not the extent of co-authorship.

A more convincing hypothesis, perhaps arising from the increased “publish or perish” pressure in the social sciences, relates to “risk-aversion”, which says it is better to spread your risks by submitting, say, four quarto-authored papers rather than one single-author paper. Moreover, if, in addition, co-authored papers are not discounted by the number of co-authors this would provide overwhelming incentives to co-author.

Our findings though indicate that single-author papers are still very common at the early-career stage, especially for those who go on to become top researchers, casting doubt on the “risk-aversion” hypothesis, for this group anyway. Interestingly, Sarsons (2017) shows that in tenure decisions women receive less credit for co-authored work than men. It is likely that young authors are equally perceived as not fully contributing to co-authored work and, therefore, choose to publish alone.

Does a discount factor apply to multi-authored papers?

Perhaps what is needed, though, is more evidence on hiring, promotional, and funding decisions with regard single versus multi-authored papers. The patchy evidence would seem to suggest that there is very limited discounting of a published article by number of co-authors. For example, it seems that the Flemish performance-based research funding system actively and strongly encourages co-authorship through its use of whole counts (i.e. giving each institution full credit for an article that bears its name and address no matter how many co-authors).

The interesting policy issue is how university hiring and promotional bodies and funding agencies have responded to these trends. They may even have partly caused them. How is a young researcher to decide between being involved in, say, five papers with co-authors or two papers single-authored if she has no idea to what extent a discount factor applies?

This is especially the case when our data show that the quality of co-authored papers (as measured by citations) is only a little higher than single-authored papers, even when there are three or more authors. The issue of how to rate different articles by number of authors, adjusted for quality, is perhaps a standout issue to be addressed by academic policymakers.

This blog post is based on the authors’ article, “Rise of multi-authored papers in economics: Demise of the ‘lone star’ and why?”, published in Scientometrics (DOI: 10.1007/s11192-017-2588-3).  The authors have also published a detailed summary of the findings for VoxEU: “The trend of increasing co-authorship in economics: New evidence”.

Lukas Kuld is a Lecturer at the Technical University Dortmund, Germany. 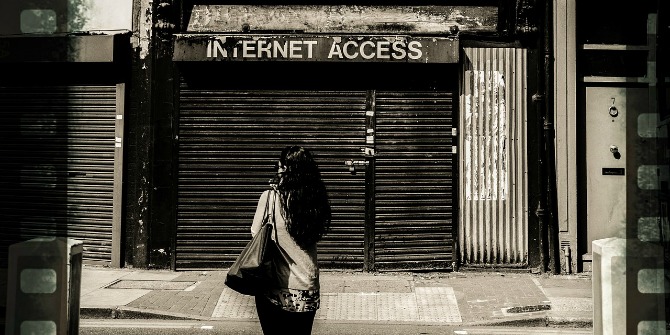