The concept of evidence based public policy has been well established for over 20 years and unsurprisingly has sustained numerous critiques and criticisms over this period. In this post Annette Boaz, Sandra Nutley, Huw Davies, and Alec Fraser, present findings from a new international review of the evidence based policy paradigm and highlight 10 ways in which the use of evidence in public policy and service delivery has both evolved and remained consistent over this period.

Events surrounding the Brexit vote in the UK and the election of Donald Trump as President in the US are often seen as emblematic of a shift towards populism and ‘post-truth’ politics. Two decades on from Tony Blair’s mantra that ‘what matters is what works’, it can sometimes seem that what matters (more than evidence) is the ability to grab attention by trading on people’s fears and emotions. 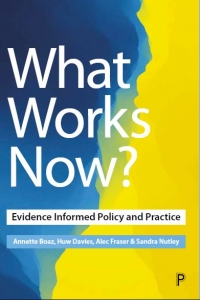 Yet, our recent review of the use of evidence in public policy and service delivery over the last 20 years strikes a more optimistic note. We found that interest and investment in evidence use may have ebbed and flowed over the last two decades, but it has not abated. Evidence still animates policy debates and practice decisions, as exemplified in recent debates about reasons for the rise in knife crime in the UK and the relative merits of single remedies (such as ‘stop and search’) versus a broader public health approach to the problem (as developed by the Violence Reduction Unit in Glasgow). Evidence can and does continue to inform policy and practice, but it does not – indeed, should not – determine these in isolation.

We also found that, in many ways, our understanding of evidence use has become more refined. For example in terms of the policy and practice questions it can help to address; what counts as good enough evidence in different circumstances; the importance of combining evidence with other forms of knowledge and ways of knowing; and the need to build relationships and systems that support evidence use. In the UK these developments have been supported by investment in building an infrastructure to support evidence use, notably in the form of the What Works Centres.

Despite such reasons for cautious optimism, there are ongoing challenges that still need to be tackled if the promise of better evidence use is to be realised. Perhaps most obviously, approaches steeped in the ideas of evidence-based medicine have had a dominant and sometimes limiting influence on the development of evidence use: such influences need to be counter-balanced by more diverse, inclusive and eclectic approaches. For example, in an international development or sustainability context, an over-emphasis on randomised experiments can lead to the neglect of other more situated and localised knowledge(s).

Resourcing too remains a problem: outside of healthcare, investment in evidence production and use still tends to be relatively small-scale and short-term. And in all sectors, most investment focuses on improving the supply of evidence, with only limited funding available to support the important challenge of evidence uptake. Developing sustainable funding models and enduring relations across evidence producers, users and intermediaries is necessary if we wish to retain the gains made and develop more secure foundations for evidence use in the future.

Finally, despite increased lay involvement in policy and practice development, their participation in the development and use of evidence still tends to remain at the margins. There is an ongoing need to ensure that evidence supports inclusion, healthy public debate and meaningful democracy.

From our review exploring these arguments we have distilled ten strands of continuity and change in the use of evidence in public policy and practice. Our hope is that these will focus discussions as the field evolves:

These ten strands emphasise the progress we have made: we understand the problems better; the field is attracting more funding from diverse sources; and the role of multiple stakeholders (including service users and the public) in promoting evidence use is more widely recognised. They also highlight the work that still has to be done: keeping an open discourse about the types of evidence needed to support policy and practice; doing more than simply collating and disseminating knowledge; and securing more long-term funding for initiatives in the field.

Integrated and multi-faceted systems for evidence use may still be incomplete, but in our view, the importance of evidence for public policy and public services has never been greater.

This post is based on the authors’ co-authored book, What works now? Evidence-informed policy and practice and article New Development: What Works Now? Continuity and change in the use of evidence to improve public policy and service delivery, published in Public Money and Management.

Annette Boaz is Professor of Health Care Research at the Faculty of Health, Social Care and Education, Kingston University and St George’s University of London @AnnetteBoaz

Sandra Nutley is Emeritus Professor at the University of St Andrews and co-founder of the Research Unit for Research Utilisation (RURU, @RURUStAndrews)

Huw Davies is Professor of Heath Care Policy and Management at the University of St Andrews and co-founder of the Research Unit for Research Utilisation (RURU, @RURUStAndrews)

Alec Fraser is Assistant Professor in Public Policy and Management at the London School of Hygiene and Tropical Medicine, @dralecfraser

Knowledge Transfer professionals lead on realising the social and economic benefits of UK research, but their roles are suffering under the creaking economy.