Impact assessment regimes are largely a-spatial, in that they assume that the academics they assess have equal access and opportunities to influence at different scales, local, regional, national, international etc, regardless of where they are located. Taking the example of Northern Ireland, Dr Vanessa Gstrein and Maria Prince explore how the lack of a functioning government has limited the role that research focused on Northern Ireland can play in developing public policy in the province and the implications this has for universities in Northern Ireland, who have to compete for research funding with other universities in the UK.

Universities are duty-bound as recipients of public funds to engage in research that demonstrates benefits for society and the economy. This is reflected in the REF 2021 national assessment exercise where impact, understood as the ‘benefit of research beyond academia’, carries a weighting of 25 per cent. The reach of research can be wide-ranging and varied, but for many academics the pinnacle of achieving impact is exerting influence on public policy and legislative outcomes. Researchers in Northern Ireland and those with an academic interest in the Province face a unique challenge in this regard, as, until January of this year, Northern Ireland was without a sitting Assembly or Executive for three consecutive years. Here, we consider the effect of the absence of government on researchers’ ability to generate impact in the context of diminishing opportunities.

Northern Ireland is a devolved region governed by a power-sharing executive and an elected Assembly that sits at Stormont. The 1998 Good Friday Agreement, which brought an end to ‘The Troubles’, introduced new institutions enshrining cross-community governance.  These arrangements, however, collapsed in January 2017 when the dominant parties Sinn Féin and the Democratic Unionist Party (DUP) failed to form an Executive.

With the suspension of the Assembly, no legislation was passed for three years. This affected critical areas of devolved policy, including health, education, policing, agriculture, infrastructure and the environment. Over 160 pieces of legislation were held up during the impasse. Westminster avoided the option of returning Northern Ireland to direct rule, choosing instead to introduce only limited and essential legislation.

With higher education funding having already fallen behind the rest of the United Kingdom, Northern Ireland risks being further disadvantaged if unfair expectations are set.

Without ministers, civil servants were left to govern Northern Ireland. This arrangement became problematic when the boundaries of their decision-making power were challenged in the Courts, necessitating the intervention of Westminster. Northern Irish government departments were instructed that while certain decisions should not be taken in the absence of ministers, other decisions must be put to a public interest test of whether taking a decision is better than deferring it. Significantly, government officials were to be guided by the draft Programme for Government, a document prepared prior to the collapse of the Executive, and were restricted from embarking on new policy directions.

It is in this political vacuum that universities in Northern Ireland and academics with an interest in the region have operated for the past three years.

Meanwhile, preparations for REF 2021 are well underway across the UK.  Like their mainland counterparts, Northern Ireland’s higher education institutions, Ulster University and Queen’s University Belfast, are accountable through the Research Excellence Framework, which assesses the quality of research in the United Kingdom. REF outcomes will inform future funding decisions and influence universities’ standing and reputations.

In recent years the impact agenda has gained increased prominence and significance. While not a new concept, impact has now become embedded as a measure of research quality. Researchers must demonstrate both their efforts to disseminate their research and the effect of that dissemination. The REF exercise captures this through impact case studies. A review of the 6000 case studies submitted by universities in the 2014 REF exercise revealed that one in five demonstrated substantive engagement with the UK Parliament. Further case studies evidenced engagement with the devolved legislatures. Academic research contributes to select committees’ deliberations through submissions and expert evidence, answers MPs queries, and informs the drafting and scrutiny of legislation.

The suspension of the Northern Ireland Assembly significantly diminished opportunities for researchers to generate measurable impact on public policy and the activities of our devolved legislature.  There was simply no legislative agenda to inform or influence.  The broader public policy arena was also difficult to impact, with the civil service being reticent to engage in policy debate and explore new ideas, lest it be seen to pre-empt the policy directions of a future, restored Executive. This has been felt keenly in relation to the suspension of the successful Knowledge Exchange Seminar Series (KESS).  Held at Stormont, KESS was the first example in the UK of a formal partnering of a legislature with academia and was widely felt to have had a positive impact on improving access to knowledge and evidence and deepening policy debate. While some efforts have shifted to focusing on impact on Westminster, geographic isolation can create barriers for Northern Irish researchers attempting to engage with national agendas.  Northern Ireland’s own representation in Westminster is also confounded by the historical decision of Sinn Féin elected Members of Parliament not to take their seats for the last 100 years.

Political uncertainty and a challenging funding environment have led universities to diversify their income sources and seek out new opportunities for innovation to deliver world-leading research with impact. As Northern Ireland’s civic university, Ulster University has engaged with business and the community.  This is evident in the £7 million research partnership with BT announced in 2017. Ulster University has also focused on the public attitudes and political discourse,  by developing a research agenda in areas such as abortion and historical institutional abuse. Through creating this evidence base, researchers are challenging the political attitudes that are contributing to the stagnation of Northern Ireland’s political institutions.  The impact of such research, although more difficult to measure, should not be underestimated during this period of political impasse. In both of these cases, research has underpinned efforts to bring issues to the national stage in seeking restitution and parity in rights for citizens in Northern Ireland.

While researchers and research managers across the United Kingdom face up to the challenges posed by the impact agenda, spare a thought for those in Northern Ireland. The inhospitable policy environment created by the absence of government requires academics and universities to respond creatively and with dogged persistence to inform policy outcomes. With higher education funding having already fallen behind the rest of the United Kingdom, Northern Ireland risks being further disadvantaged if unfair expectations are set. Awareness of these unique circumstances is required to ensure that the current unlevel playing field does not impact our universities’ future research funding and the critical and ongoing social and economic contribution they make to life in Northern Ireland.

Vanessa Gstrein is a Postdoctoral Researcher at the School of Applied Social and Policy Sciences at Ulster University. Vanessa has held senior management positions in the Australian Public Service, and the not-for-profit and higher education sectors. Her research interests include public policy, policy change theories including policy transfer, and comparative drug policy. Vanessa’s PhD, awarded in 2019, examined the challenges and barriers to replicating policy on drug consumption rooms in Australia and Canada.

Maria Prince is an Impact Manager at Ulster University. She oversees strategic impact planning and support provision across the University’s research portfolio. 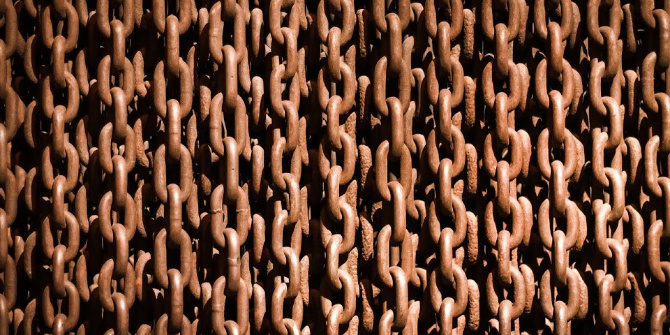