The Open Access Directory (OAD) is a wiki of factual lists on the subject of open access. Designed to make sense out of the chaos of different information about open access, in this post Nancy Pontika recounts why the OAD was created and outlines how it forms an important knowledge base for anyone seeking to learn about open access and its development.

Since the 2002 Budapest Open Access Initiative, the open access movement has gained remarkable velocity and scale, evolving to become an increasingly complex and disparate sphere of interest. The Open Access Directory (oad.simmons.edu) is a wiki-based reference work designed to document and organise this complexity.

The Open Access Directory (OAD) was launched in 2008 by Robin Peek, a professor at  Simmons School of Library and Information Science, and Peter Suber, founder of the open-access movement and one of the original drafters of the Budapest Open Access Initiative. Simmons has hosted the OAD on its website from the beginning.

Before the OAD, Peter Suber had maintained a hand-coded HTML page of lists related to open access. But hand-coding the updates, and relying on the time and observations of just one person, meant that the lists could not scale with the growth of the open-access movement itself. Therefore, in 2007 Peter suggested to Robin that Simmons University host a wiki that would crowd-source the lists. Their vision was that the OAD would evolve into a community project, much like Wikipedia. In fact, Peter first tried moving some of his lists to Wikipedia itself, where they were repeatedly taken down for violating Wikipedia’s neutral point of view. After losing several skirmishes with Wikipedians, it was proposed to go it alone and create an independent wiki.

The OAD consists of simple factual lists on open access, much like its predecessor on Peter’s website, but covering a much larger set of material. The rationale is to eliminate the kind of narrative and opinion that can trigger edit wars. The focus on list-making also encourages rapid, piecemeal edits, and makes it easier for readers to accept the result as an authoritative reference work. Incidentally, it also means that OAD complies with the Wikipedia neutral point of view.

Highlighting how much open access has changed since 2008, whereas OAD started with only 5 factual lists, today it hosts 47 “launched” lists and 10 lists under development. Currently the OAD has a total of 473 content pages, while the amount of all pages is 1,472. So far it has been edited 12,470 times by 1,480 registered users. 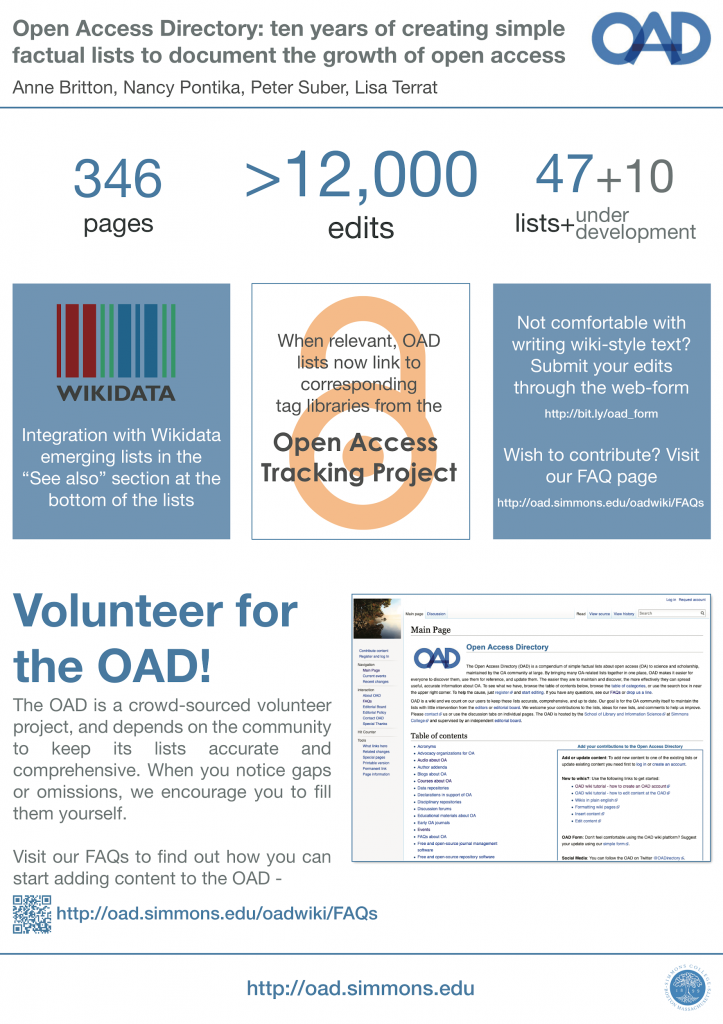 Currently debates around open access take place across different areas of the internet and the OAD is unique as it brings together many components and examples that can be used to advance one’s knowledge and strengthen the case for open access. The OAD can be used in many ways. Researchers, librarians, and journalists can consult the lists, e.g. Declarations in support of OA, Disciplinary repositories, OA journals published by libraries, etc. to find information on many questions about open access that could be used in research, reporting, or paper writing. Publishers can discover information from the lists OA journal business models or Publishers of OA books. New open-access advocates can visit the lists to get informed about open-access developments and organizations, e.g. Advocacy organisations for OA or Discussion forums , while current open-access supporters can discover useful information to support their research and arguments, by using for example the list Author Addenda. The OAD also lists Courses about OA, providing a useful resource for anyone looking to expand their knowledge of OA. Finally, funders can use the  OA publication funds list to see how other funders have sought to promote openness in research.

In addition, three features and technologies were recently added to the OAD:

All OAD content is contributed by its community of volunteers and this endeavour reflects the ethos of open access, to co-create a “common intellectual conversation and quest for knowledge”. We would therefore like to take this opportunity to thank all the volunteers who have enlarged and improved OAD over the years. OAD aims to record updates on open access, bring to everyone information in a meaningful way and offer a rich resource. For this reason, the OAD needs the community’s contribution – I would also like to call for new volunteers in this open and free of cost environment to help keep the OAD accurate, comprehensive, and up-to-date. New contributors can visit our getting-started handout or the OAD FAQ.

Acknowledgements: I would like to thank Peter Suber and Anne Britton for their contributions to this post and their work on the OAD and to honour the memory of Prof. Robin Peek for her passion and contribution to open access.

Nancy Pontika holds a PhD in Open Access from the School of Library and Information Science at Simmons University in Boston. Her main areas of interest are open access, open science, responsible research and innovation and the role of text and data mining of open access scientific literature. She is currently an Open Access Aggregation Officer at CORE, a service aggregating millions of open-access research papers. She has been involved in five European projects, FOSTER and FOSTER Plus, OpenMinTeD, FIT4RRI and ON-MERRIT. She serves as the Editor of the Open Access Directory, and a contributing tagger for the Open Access Tracking Project. Tweets at @nancypontika.

Open Data in Economics: The Basis of Reproducible Research 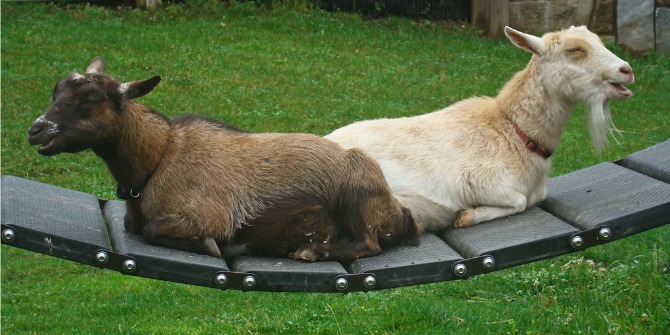