Academics reporting to be simultaneously affiliated with multiple organisations is a growing global phenomenon with significant implications for the usefulness and accuracy of research evaluations. Reporting on findings from a new study, Hanna Hottenrott, Michael E. Rose and Cornelia Lawson find that much of the recent rise in multiple author affiliation can be linked to research assessment regimes introduced in the mid-2000s.They suggest this highlights a significant gap in our understanding of how research assessment regimes, both assess and construct academic practices.

This is not a hypothetical, it already happens. To win the ranking game, institutions try to score high on metrics and the reliance of rankings on bibliometric data creates incentives for institutions to offer affiliations to high-profile researchers who are primarily employed elsewhere. The buy-in of researchers from elsewhere such that they add an additional affiliation on their paper is documented for universities from Chile, China and from Saudi Arabia. These pressures are magnified in the run-up to major assessment exercises and funding reforms, when research institutions are eager to gain every additional publication. Russia is one such example.

The share of actively publishing authors reporting multiple affiliations on their publications at least once per year increased from around 10% to 16% since 1996.

In a new study, we document this phenomenon based on evidence from 15 million authors from 40 countries who published 22 million articles between 1996 and 2019. In 2019, almost one in three articles lists at least one with multiple affiliations at the same time. The share of actively publishing authors reporting multiple affiliations on their publications at least once per year increased from around 10% to 16% since 1996. Figure 1 shows that this growth of multiple affiliations is not driven by specific academic fields or by better journals, or by certain countries. It is prevalent, and poses challenges to determining the locus of scientific activity, i.e. where the discovery was made. This raises the question of how much significance should be placed on this trend and whether it presents a justification for a science policy intervention. 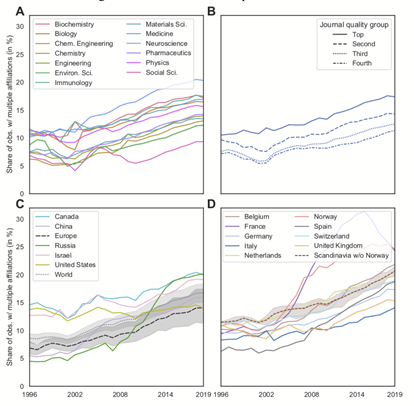 Why do researchers have co-affiliations?

The trend towards multiple affiliations might however not be driven only by institutions’ response to assessments and evaluations. Given the importance of institutional affiliations in academia, researchers may seek out affiliations to institutions outside their main employment to ensure access to resources and networks.

A recent survey of academics shed some light on these kinds of affiliations. The authors surveyed 2,389 scientists based in the UK, Germany and Japan between 2013 and 2015 and found that academics differ in their motivations for seeking additional affiliations. Networking and prestige play an important role, but so too does access to resources and teaching opportunities. Personal income and access to students is rarely an important motive. Individual motivations determine the type of co-affiliation they engage in: Researcher-initiated and research-focused co-affiliations are often motivated by networking and resource access, while co-affiliations that serve other purposes (like teaching), are more often income-motivated. But, what this does not explain, is why co-affiliations increased relatively suddenly only in the early and mid-2000s and not earlier.

The Role of Excellence Initiatives

The rise in multiple affiliations co-occurs with fundamental reforms in the allocation of research funding that several countries implemented during this period. Since the early 2000s, research funding reforms designed to create performance incentives, elite institutions, and stratification in science, have been implemented around the globe. Universities, research organisations, and academics are adapting to this increasingly competitive environment. These policy shifts likely provide incentives for researchers to seek additional roles outside their main employment and for universities to create roles for and affiliate prolific researchers.

Our Difference-in-Differences estimations show significant increases in the likelihood that an author from a certain country reports multiple affiliations on a publication after the introduction of funding reforms compared to authors from other countries. This difference is particularly high in France, Norway and Russia, but also significant in several other countries such as China, Japan and Germany.

For instance, authors based in France or Norway are 11% more likely to report a multiple affiliation than before the funding reforms, relative to the control group. For Russia the figure is 9%. Out of the 17 countries for which we register reforms, only for the United Kingdom and Italy do we not find statistically significant increases. Both countries undertook similar research assessments exercises in 2008, but without major shifts in funding allocation. This indicates that selective funding mechanisms and not research evaluation systems as such, may be associated with multiple affiliations.

Below figure shows these increases graphically. It compares the share of authors from China, Russia, France and Germany with countries that did not introduce any excellence initiative. 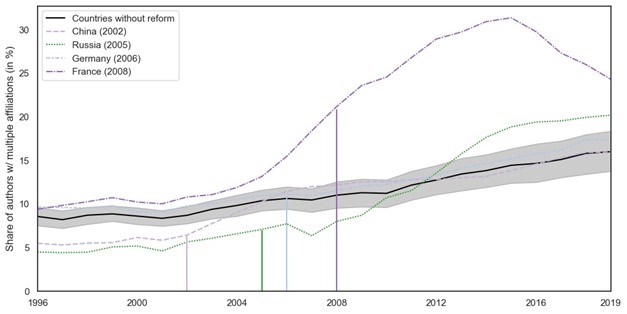 The increasing prevalence of multiple affiliations suggests that fundamental changes to institutional conditions and the organisation of science are at work. Previous research has discussed changes in the complexity of science and increases in team sizes and cross-institutional collaborations on the rise of co-authored papers and their role as a coping mechanism. In addition to incentives created through policy shifts, the rise in multiple affiliations may be the reflection of another coping mechanism. However, whether co-affiliations support knowledge creation or simply serve the strategic purpose of reputation enhancement for researchers or institutions remains unclear.

We hope these findings will encourage more research into the contractual and organisational nature of these multiple affiliations and their consequences for scientific research. There are still significant knowledge gaps around the actual benefits (and pitfalls) for individual scientists, and the institutions involved, arising from taking and offering multiple affiliations.

This post is based on the authors’ co-authored article, The rise of multiple institutional affiliations in academia, published in JASIST.

Hanna Hottenrott is professor of innovation economics at the Technical University of Munich’s School of Management. Her areas of research interest are in the economics of innovation as well as in science and innovation policy.

Michael E. Rose is Post-Doc at the Max Planck Institute for Innovation and Competition in Munich. His research focusses on Innovation Economics and Economics of Science in particular.

Cornelia Lawson is Senior Lecturer in Science, Technology and Innovation Policy at Alliance Manchester Business School and member of the Manchester Institute of Innovation Research (MIOIR).