As a student of Environment and Development, I often leave my lectures feeling slightly unsettled. It is difficult to confront the complexities of the environment-development nexus without a sense of inevitable doom – the future of our existence on the planet seems bleaker by the day as more people adopt resource-intensive lifestyles fueled by the extractive economy.

The culprit of this catastrophe is described through a range of catchphrases: institutional failures, climate change, unchecked capitalism, resource scarcity, socio-economic inequality … Where do we begin to address them? How do we disentangle and understand these issues in the first place? Dr. Barbara Harriss-White’s talk at the LSE last week did just this. 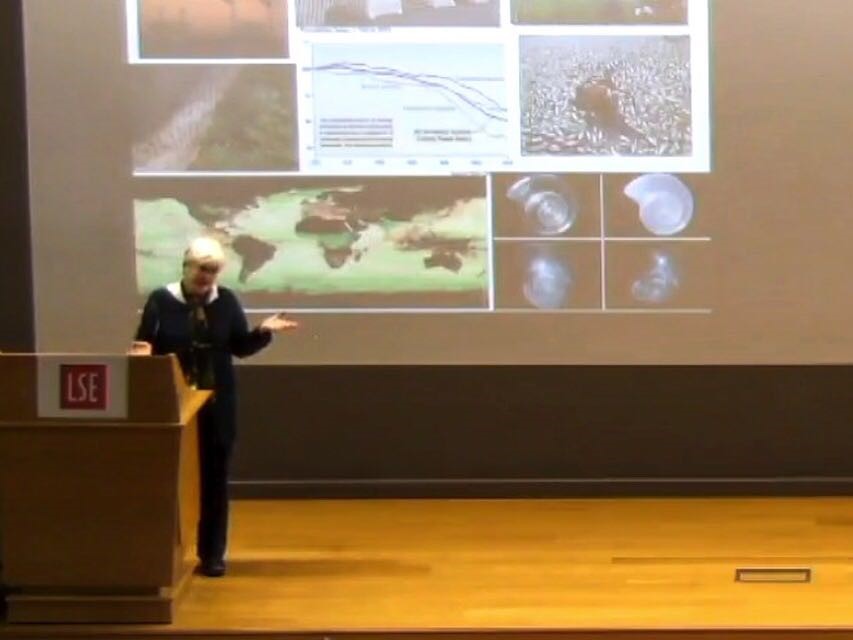 Dr. Harriss-White looked at the bigger picture to explain how we got to where we are today. She called it the global “metabolic rift”, highlighting two ideas:

See the distinction between a modern city and a town, for example. To meet the explosive resource demands of the city, materials are imported from far-off places, commodities are consumed, and the waste created creeps further afield. The pace and scale at which these resources are consumed and dumped is not in sync with the pace at which nature reconstitutes and feeds them back into the production cycle. It’s a rift caused by not only cities, but by large scale agricultural practices, carbon-spewing industries, changing lifestyles, and so on – it is a concoction of dozens of rifts at various scales that have brought us to where we are today.

Dr. Harriss-White spoke of three drivers that cause and can also possibly fix the metabolic rift: capital, labor, and civil society. She pointed to the tiny handful of companies that manage large amounts of capital, and produce two-thirds of the emissions which cause climate change.

Key decision makers, she commented, “could all fit on a Greyhound bus or two” and be held responsible for environmental externalities. Labor associations and civil society have their own roles to play in moving towards sustainable jobs and triggering a wave of collective action.

There is enormous need and potential for action to be taken, but just like the stereotypical student, the world is still procrastinating. Corporations spew sustainability rhetoric, but take real action only to the extent it doesn’t affect their core profits. Emission reduction targets are pushed further into the future while some diplomats engage in the blame game. Unendorsed by larger institutions, labor and civil society actions move at snail’s pace with respect to the needs of the hour. Dr. Harriss-White maintains that the metabolic rift is a political problem, one that political institutions are in no hurry to address at all.

So, what should be done? The Q&A conversation with the audience quickly moved towards discussing solutions. Initiatives already underway can be pursued further, such as

Development studies should include an integral environmental component. There is no silver bullet that will solve all our problems, but there is a silver buck-shot that begs for the urgent need to form new alliances, think creatively, and take bold steps to soften this existential rift.

It’s easy to get overwhelmed in the face of the sheer magnitude of these issues, but there is space for optimism and action. Dr. Harriss-White’s lecture left me part bewildered, part terrified, and yet somehow more driven to continue learning and working on what is important. My professors and colleagues at the LSE have taught me that there is no use in waiting, that one must dive into these waters from wherever they stand – be it through cutting-edge research, feisty activism or creating impactful businesses. The onus of answering this clarion call and demanding change lies upon us.

Kruti Munot (@krutimunot) is an MSc Environment and Development candidate at the LSE. Prior to LSE, she worked in clean technology and sustainable finance in India. Her academic interests lie in the energy-environment-poverty nexus, and the role of financial institutions and entrepreneurship in driving sustainable development.