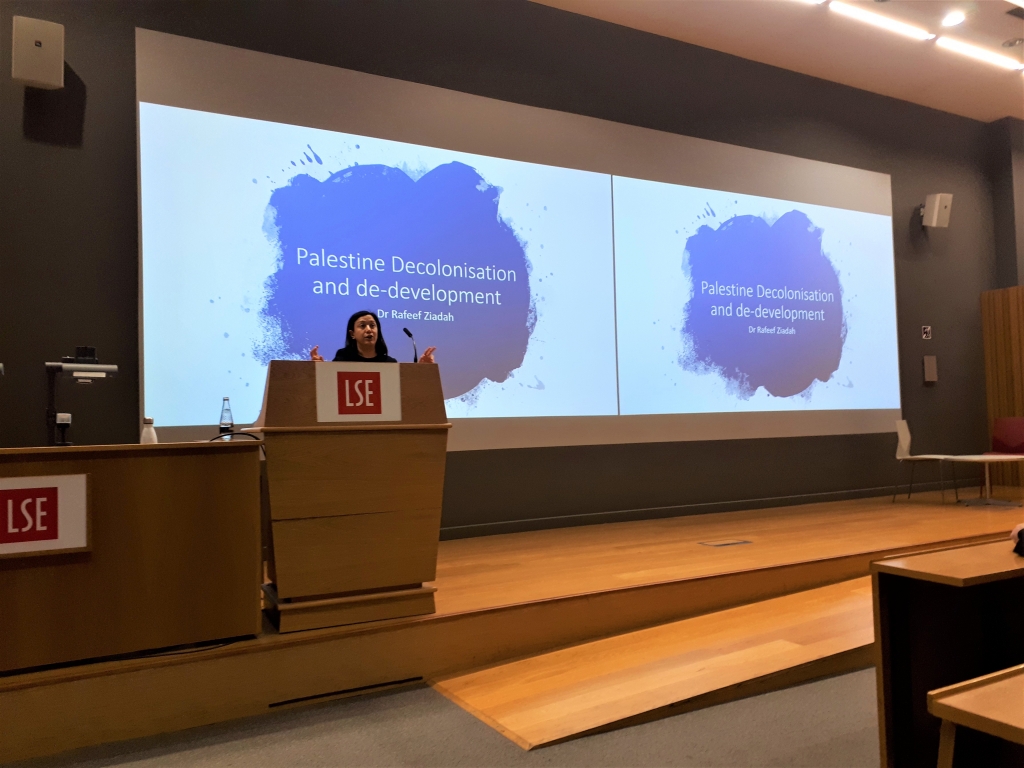 “2.7 million in the West Bank….2 million in Gaza…Many more…across the world.”

Dr. Rafeef Ziadah started her talk on ‘Palestine De-colonisation and De-Development’ with a slide on the various frames of looking at Palestine. Step by step she took us through the history of Palestine, since the 1950s. But unlike what we usually get to read and hear, this time it was a Palestinian perspective. Dr. Ziadah, herself a Palestinian refugee, spoke evocatively and poignantly about the lesser-known story of Palestine. While I can do little justice to this provocative talk, I felt I could do a better job at distilling it into easily memorable snippets.

So, here are 5 things I learnt about Palestine on a Friday afternoon.

In Gaza and West Bank, she said, there were fortified fences and walls interrupted by ‘snipered’ watch towers and ‘terminals’. These terminals, controlled by Israel, controlled and monitored everything that went in and out of the area. Goods and services had to pay a tax to go through these terminals. What I didn’t know was that the ‘goods and services’ included aid. Therefore, this meant even the UN pays taxes to send aid across to Palestinians.

Many people wonder why Gaza is bombed a lot but West Bank is not. Dr. Ziadah said it was because there were many Israeli settlers in West Bank. Most of the Israeli settlements are in prime locations, often on hill tops, near aquifers, quite understandable. However, what surprised me was that there were roads in and around the settlements which were exclusively for the Israeli citizens. The Palestinians are allowed to use other roads which are often poorer in quality. Hence, there is not just a segregated geography but also a segregated economy.

There are many aid agencies working in West Bank and in Gaza. There were times when up to 80% of the people in Gaza depended on food aid. While on one hand aid agencies pay taxes on the aid, newer restrictions are forcing them to cut down. What I didn’t know was that the ‘cut-down’ including reducing the provision of hearing aids for Palestinian children. As a medical doctor, I know that this can have permanent effects on the children, affecting their hearing, speaking and learning.

This may sound ridiculous to some, given the complex reality on the ground. However, during the ‘triumphant period’ of the Oslo Accord of 1993, this was apparently a common idea. I guess Singapore must have been chosen as a model given the similarities in land available to the Palestinians. Gaza strip is about half the size of Singapore. But its economy is less than 1% of the latter. Dr. Ziadah, however, mentioned that the development model of Singapore is another lecture to talk about. Meanwhile the plans to build a Singapore on West Bank did start and a casino was built in Jericho in 1998!

The Israel-West Bank barrier, locally called as the ‘apartheid wall’ was a wall built by Israel citing security reasons. Many of us would have seen images of this scarily high wall topped with barbed wire and lined by patrol roads. But what I learnt from Dr. Ziadah last Friday was that this wall was not merely between West Bank and Israel, but that it often “snaked” into parts of the West Bank, affecting the movement of the Palestinians even within the West Bank. A biometric-based pass card system apparently works to ‘allow’ movement of Palestinians across this wall.

After the talk, there was time for Q&A. Several interesting questions were asked and answered during this time, including questions on aid, securitization, ‘Samood’ and on possible steps that can be taken towards resolution.

Last Friday, I left with new perspectives about the Palestinian issue, an issue that eerily has many emerging parallels across the world, including my own country, India. I would like to end this blog urging you to listen to at least one of Dr. Ziadah’s poem:

Don’t forget to join us on Friday for the Cutting Edge Issues in Development Thinking and Practice lecture with guest speaker Claire Hutchings who will give a talk on “Why Measurement Matters”. Friday 22 November, 4-6pm in the Sheikh Zayed Theatre. External guests please register via: https://bit.ly/2kvbH69.

Dr. Harikeerthan Raghuram is an MSc Health and International Development student at LSE and recipient of the Wellcome Award for the programme. Trained as a medical doctor from Christian Medical College, Vellore, India, his interest is in political health economics, health equity, and participatory approaches in health system strengthening.