MSc Health and International Development students and staff give us their individual reflections on a visit to the Wellcome Collection’s Being Human exhibition which explores what it means to be human in the 21st century.

“On Friday, January 17, upon completion of our final exam (and still procrastinating with one of the final essays), students from the Health and International Department voyaged all of 30 minutes to the Wellcome Collection, a massive museum in the centre of London, free entry to all. There were relatively small exhibitions presented that encouraged visitors to learn more about human health.

“We saw two exhibits: Being Human and Medicine Man. Both explored various histories of health and wellbeing.

“Being Human, as its title suggests, considers what it means to “be human” in the twenty-first century. The artwork and objects on display showcase people’s fears about illness, disability, and environmental collapse. It also explores medical technology and how recent innovations have impacted people’s lives. The HPV vaccine, for example, has been important in preventing contraction of the virus. However, due to miscommunication and mistrust, several myths about its effectiveness and side effects have been spread. Ethical issues are also discussed in the portrait of HeLa cells, the first human cell line to survive and grow. These cells have been instrumental medical research. However, they were taken without the consent of Henrietta Lacks or her family members, who received no compensation. These pieces showcased how medical innovations are riddled with ethical considerations progress is often taken at the expense of marginalised voices. and Other compelling works were the objects created by Dolly Sen to encourage perception shifts regarding visible and invisible disability.

“Medicine Man consisted of various artifacts collected by Sir Henry Wellcome dealing with health and medicine across time and various cultures. There were four main themes: birth, health, sex, and death. Walking around the exhibition, you could see how scientific knowledge evolved over time. Also showcased were the pervasive cultural norms of the various places. The objects varied from Japanese sex aids, chastity belts from the Middle Ages, and Charles Darwin’s walking stick. How Sir Henry picked up a piece of King George III’s is beyond me, but judging from the wide diversity of his collection, is just one of a thousand interesting stories that he has.

“Medicine Man and Being Human were just two exhibits at the Wellcome Collection. Through the interactive displays, Health and International Students could see first-hand some of the issues being studied and the impact that they have on real people’s lives. We are all very lucky that this massive collection of art and knowledge is just a 25 minute walk from the LSE library.” (Frances, MSc Health and International Development Student)

“I found the display of plasticized HIV positive blood particularly striking. To be able to see something normally inside the body while listening to the diagnosis and treatment stories of the individuals affected was emotional and demonstrated the power of storytelling in health.” (Nicole, MSc Health and International Development Student) 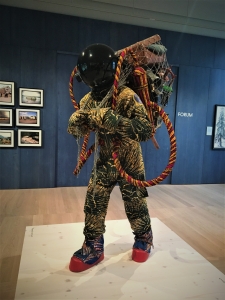 Yinka Shonibare’s ‘Refugee Astronaut’ encourages us to ask questions: who are they? Image credit: Nicole Davis 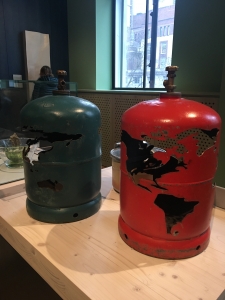 Titled ‘The World Under Pressure’, Batoul S’Himi’s domestic objects encourage us to think about our impact on the world. Image credit: Nicole Davis

“After reading the timeline history of the HPV vaccination in Japan that included lies to discourage getting vaccinated and ended with government officials ignoring the advice of experts to continue the vaccination efforts that had been previously suspended. I turned around and seen McDonald’s on a video running in the corner. I thought to myself, “McDonald’s is able to advertise and overcome well-known, proven facts about its negative effects on health, how can we use McDonald’s-style advertising in developing countries to overcome misinformation about public health interventions?” ” (Bryan, MSc Health and International Development Student)

“The Ebola response workers’ uniform with a picture attached to the front (a small gesture/change that definitely makes the uniform seem less frightening, at least for me!)

“The HIV-related stories that could be listened to as audios (the audios made the whole experience more personal)” (Sofija, MSc Health and International Development Student)

“I think the most interesting piece of the exhibit for me was seeing the HeLa cells which are immortal cancer cells that came from the body of Henrietta Lacks, an African-American woman, in the 1950s. These cells have been extensively used in research and medical advancements throughout the world, but she did not consent to its extraction or use, and neither her nor her family was compensated as such. This exhibit makes us reflect on how we can celebrate the achievements made in medicine while acknowledging the history of experimentation and abuse of black Americans in the field, and the importance of ethics and informed consent in research.” (Kassandra, MSc Health and International Development Student)

“Finding out that we share 70% of our genetic background with tiger fish which are used in medical research. Always just thought they were just innocuous boring fish in the aquarium!” (Tiziana, Associate Professor in Health and International Development)