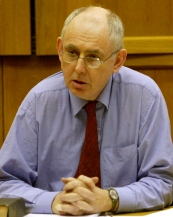 The Department has lost a truly outstanding figure.  Fred was in every respect a larger than life character who made an enormous contribution to the teaching of International Relations at the School.  He will be remembered as one of the truly original writers that the subject has produced in the last 30 years, one who pioneered fields such as the study of revolutions, and the role of women in IR.

He would be important for that alone. He just happened also to be one of the world’s leading Middle East scholars.  His colleagues and students both valued him for his willingness to go the extra distance without demur or complaint. He was an inspirational lecturer, and an author who produced a series of elegant, penetrating and thought-provoking texts.

Fred was made an Emeritus Professor of the Dept when he left for Barcelona, and we had looked forward to his continuing involvement.  It is almost impossible to imagine the Department without him – except that he will continue to be here as an icon and inspiration.