The OECD has been exploring the interaction between human rights, and related issues such as labour and environmental protection, and international investment law. Most recently, in June 2014, the OECD published Investment Treaty Law, Sustainable Development and Responsible Business Conduct: A Fact-Finding Survey.[1]

International investment law is grounded in some 3,000 investment treaties that have come into force over a period of several decades. The treaties contain a largely standard set of broadly worded substantive commitments relating to host country treatment of covered foreign investors. These commitments include disciplines on expropriation (including, often, indirect expropriation through regulatory instruments), fair and equitable treatment and non-discrimination.

The vast majority of these treaties allow covered foreign investors to bring claims for monetary damages caused by alleged treaty violations by host governments pursuant to investment arbitration proceedings, originally modelled on commercial arbitration. These proceedings are referred to as investor-state dispute settlement (ISDS). Treaty-based ISDS is unique – there is nothing else like it in international law. It also diverges from administrative proceedings for resolving analogous disputes under advanced domestic systems of law. Recent ISDS cases have involved government policies regulating, among others, tobacco marketing, nuclear power, health care and minimum wages. 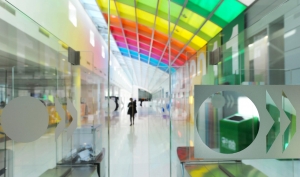 The latest OECD report provides a starting point for looking at the interaction between human rights law and international investment law, but its immediate aim is preliminary fact finding – that is, it seeks to generate internationally comparable information on how human rights concerns and related issues are referred to in a body of international law that is inherently difficult to size up. Difficulties stem from the fact that the textual basis of investment treaty law is dispersed across 3,000 treaties and also from the historically weak standards of transparency associated with ISDS decisions. While transparency practices are improving, arbitral decisions touching on important matters of regulatory and fiscal policy are not always publicly available.

The OECD study covers both treaty texts and arbitration decisions based on those treaties. It first provides statistics, based on keyword searches of treaty language, on whether and how human rights concerns and related issues are integrated into the provisions of a sample of 2,107 investment treaties. It then gives statistical information on the frequency of references to these issues and to international human rights instruments in 1,113 investment arbitration decisions.

Treaty language referring to “human rights” is extremely rare – it appears in less than 1% of the 2,107 treaties contained in the sample. This is small not only relative to the total sample, but also relative to the other issues covered by the study (protection of the environment, labour conditions and standards and the fight against corruption). Environment is the concern that has the most number of references in the sample, with a little over 10% of the treaties including some reference to the protection of the environment, followed by labour conditions and standards with 5% and the fight against corruption with 1.5%.

The first mention of human rights in the treaty sample appears in a 2002 Austria-Malta treaty. Since then, the number of newly-negotiated treaties mentioning human rights concerns has increased gradually. This evolution has been slower than for other related issues: 90% of the very recent treaties mention environmental concerns and about 40% contain language on labour conditions and standards and the fight against corruption. In contrast, only 10% of recently concluded treaties mention human rights.

Another interesting difference between human rights references and other related issues in investment treaties can be seen by examining the function of the treaty language. All human rights references occur in the preamble to the treaty and therefore help to clarify the context, object and purpose of the treaty for the interpretive process. This contrasts, for example, with environmental references, which appear not only in preambles, but also in provisions relating to preserving policy space or indirect expropriation.

In all legal systems, interpretation by judges and other adjudicators plays an essential role in clarifying the meaning of the law in concrete situations. This is especially true under investment treaty law because, as noted earlier, treaty commitments regarding treatment of covered foreign investors – for example, the promise to accord them “fair and equitable treatment” – are generally broadly drafted.

In addition, previous OECD research has shown that arbitration proceedings in ISDS are lightly regulated and that treaties generally do not provide much guidance on such matters as which bodies of law are to be applied and the relationship of ISDS procedures to other adjudication processes.[2] Thus, arbitration panels under ISDS have broad decision making powers.

In order to start assessing whether and how arbitrators integrate human rights and other related considerations into their legal reasoning, the OECD has conducted a preliminary survey of 1,113 ISDS decision.[3] contained in a subscription database [4] and issued from treaty-based investment cases. The decisions were searched for the following sensitive key words: “environment”, “corruption”, “bribery”, “labo(u)r conditions”, “labo(u)r standards”, “labo(u)r law”,[5] and “human rights”.

The survey shows that 287 of the 1,113 decisions surveyed mention at least one of these concerns – that is, 26% of the documents refer in some way to them, involving, at times, lengthy discussions. Here, references to human rights are relatively frequent, compared to mentions in treaty texts. The breakdown of references by issue is as follows: 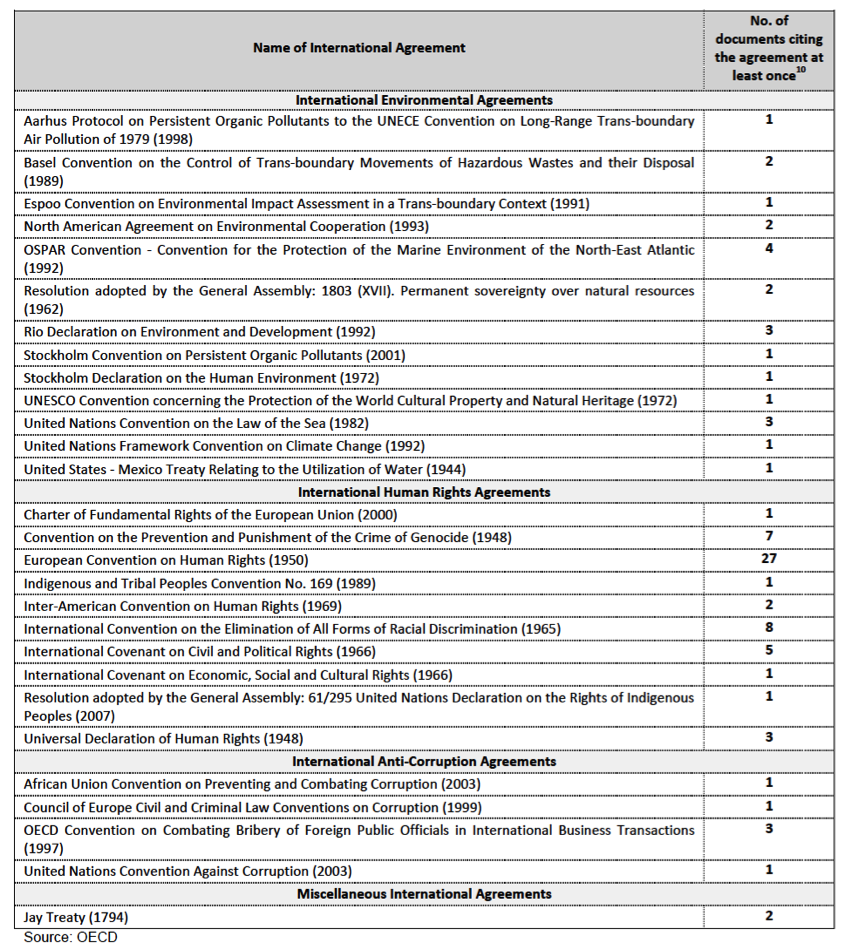 The nature of references in the arbitral decisions to human rights instruments appears to be quite diverse. Although some references seem to be used to clarify substantive commitments under the treaties, often they appear to be utilised to shed light on procedural and jurisdictional issues (e.g. on the requirement of prior attempts at amicable settlement of a dispute). Some cases also seem to cover situations where the same or similar facts are dealt with in dispute settlement procedures under both international investment treaties and the European Convention on Human Rights. Thus, although the survey is purely statistical and does not explore arbitrators’ reasoning, it nevertheless provides a starting point to affirm that investment arbitration cases sometimes refer to broader considerations than investment protection and that some amount of interaction, including cross-fertilisation, between human rights and investment treaty law appears to be taking place.

* The opinions and views expressed and arguments employed in this note are those of the authors and do not necessarily reflect or represent the official views of the OECD or of the governments of its member countries.

[3] The documents examined in the survey include decisions on petition for intervention as amicus curiae, decisions on jurisdiction, awards on merits, and separate opinions rendered by arbitrator(s), as well as decisions of annulment committees. For convenience, they are referred to hereafter as “decisions” or “documents”.

[4] The database is the Investor State Law Guide.

[6] A summary examination of the 20 first results produced by the general search on the key term “labo(u)r” shows that the cases referring to this term involve issues such as non-payment of workers in the context of bankruptcy and labour market flexibility or labour policy in the context of government responses to economic crises.

[7] A full list of the international agreements relevant for human rights and related issues that were searched for is provided in Annex 4 of the OECD Working Paper.

[8] Annex 3 of the OECD Working Paper provides more extensive quotes of how these instruments are cited in ISDS decisions.