Back in March, Suzi Hall from LSE Cities visited Harris Academies to deliver a seminar to sixth form students. On 24 June 2015, students from Harris Academies once again took part in an LSE Research Festival 2015 event. This time the tables were turned and the students visited the university to get a taste of what LSE research has to offer with a series of workshops from LSE researchers. The goal of the day was to give prospective students a taste of the variety and innovation of research in the social sciences being conducted across the school, as part of the wider LSE Research Festival aiming to be a public celebration of social science research.

Students were welcomed by a brief introduction to research across LSE by Professor Mary Morgan of the Economic History Department, who introduced students to the breadth of work conducted across the school and showed students the winning poster entry to the LSE Research Festival 2015 Exhibition, which this year was won by an undergraduate researcher for the first time.

Students were then given an hour long workshop with Mona Sloane, a researcher from LSE Cities who is part of the Configuring Light/Staging the Social project. Her workshop focused on the ways in which social research can be used to influence lighting design, with reference to a recent workshop conducted on the Whitecross Estate in Islington. Students were asked to think about the lighting in their own communities in the context of the seminar.

As part of the session students also had the opportunity to return the favour by presenting their own research. Suzi Hall’s presentation in March discussed the socio-economic make-up of Peckham Rye Lane, and students had conducted their own research on the area. Their research question, “Should Peckham be re-branded”, was presented to Suzi who provided comments and feedback on their work.

The closing talk was given by Sam Friedman of the sociology department, whose workshop was entitled ‘Comedy and Distinction: The Cultural Currency of a ‘Good’ Sense of Humour’. The focus was on the ways in which comedy has become a form of cultural capital, feeding into wider themes of social inequality. If one does not “get” the joke, does that make one inferior? Should comedy feel like sitting an exam? The students had the opportunity to think about the ways in which this view of comedy affects wider social structures.

Students enjoyed the opportunity to get a taste of the breadth of social science research being conducted across the school. “The whole experience was amazing and now I really want to go to LSE!” said Michelle Nguyen, a student at Harris Girls Academy, East Dulwich, “The environment and the people were so welcoming and you could feel the lecturer’s passion for their research, which I found inspiring. I feel like I would fit in and really enjoy it here.”

Holly Wilde, also from Harris Girls Academy East Dulwich, added “I really enjoyed both lectures as they made me think about familiar things in a  totally new way. Particularly Configuring Light as it connected two areas of interest for me which I didn’t know were linked – design and sociology… I was also surprised at how young and cool the lecturers were!” 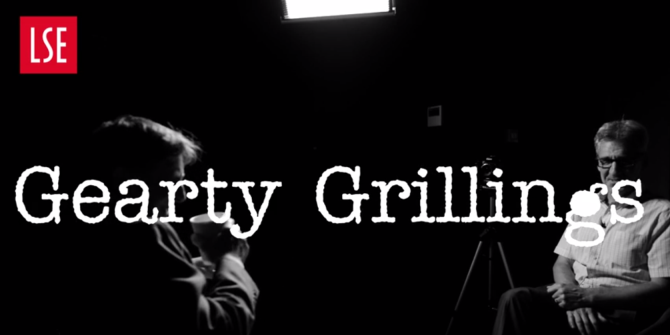 Gearty Grilling: Awol Allo on The Courtroom as Political Theatre