Ryan Joseph O’Byrne describes his time in Pajok, South Sudan, and suggests that development interventions may do well to avoid areas under the sway of the national political marketplace.

It is nearly a year since my wife and I left the small and predominantly Acholi-speaking community of Pajok in rural South Sudan. We had spent the better part of 15 months living in the area as I conducted research for my PhD in Anthropology at University College London. I therefore welcomed the chance offered by JSRP to think about how policy or development programmes could best impact the lives and problems of the place and people who mean so much to us both.

South Sudan is one of the world’s most under-developed, unjust, and both militarily and existentially insecure countries. Increasingly, it seems as if the politico-military elite run the nation purely for the economic and political benefit of their wider kin, class, and ethnic groups, heavily favouring the political and economic advancement of persons from within their own social groups as well as illegitimately funnelling funds to secure, protect, or promote their interests (broadly defined). This makes the political economy of South Sudan an almost classic example of the interlinking of two of JSRP’s emerging ideas: neopatrimonialism and the political marketplace. Indeed, in South Sudan it is almost impossible to disentangle these two modes of governance in the creation, maintenance, and action of public authority, at least at the level of state or state-like actors.

It is no overstatement to say that South Sudan’s politico-military establishment is inherently corrupt (Jok 2013; Tiitmamer & Awolich 2014). It is because of this simple fact that I believe international policy makers and funding providers looking to invest in the development of South Sudan should focus their attention elsewhere in the country, avoiding both the politics and the politicians entirely, and seek to channel development projects to and through (especially rural) local communities. After all, the everyday people of such places are those most in need of both the security and the justice that such development intends to bring.

I believe that, for a development agency in search of such a place, the community of Pajok in southern Eastern Equatoria State seems like the perfect place to start. Situated on the South Sudan-Uganda border and a mere 150km southeast of the capital city, Juba, Pajok is ideally placed for developmental interventions of all types and at any scale. Although now connected to Juba and Magwi by recently completed all-weather roads, Pajok is just as accessible from northern Uganda (via Kitgum and Lamwo Districts) as it is from the capital city. This is an important consideration following the conflict that erupted in December 2013 and is continuing to trouble the country.

Predominantly populated by South Sudan’s minority Acholi ethnolinguistic group, as well as being a marginal border area with little strategic or economic value, Pajok sits outside the ethnic and political aspects of the current conflict as well as much of the widespread governmental corruption that some say fuels it. It is involved neither in nor outwardly against any of the major proponents of the current instability, remaining a non-player in the neopatrimonalism of the country’s political marketplace. In this way, the very marginality of Pajok may make it the perfect place to safely and cheaply develop the human potential of the South Sudanese nation. Therefore, in this post I introduce the reader to life in Pajok and highlight key areas in which developmental interventions could best aid the community. I end by focusing on an area of personal concern: improving access to and the quality of education in Pajok.

Building a future in Pajok

“There are no problems any more, no rebels. But the life of people is quite difficult because, as I told you before, things are missing here a lot” – local women’s leader, December 2013.

The quote above echoes many people’s attitude to life in contemporary Pajok. Most think life is hard but relatively secure. The overwhelming feeling is certainly that Pajok is safe. And it is, especially compared to the rest of South Sudan. In the 15 months we lived there (August 2013 – November 2014), neither my wife nor I ever felt we had anything to fear from anyone or anything, either within the community or from outside it (and we were there for nearly a year of the current conflict).

Still, Pajok remains deeply existentially insecure: there is little in the way of educational facilities or support, no health services, nothing to provide economic security when agriculture fails, a weak and autocratic governmental system, a non-existent police or security service, and a slow and possibly corrupt judicial system. Despite this, as much of South Sudan remains in the grip of civil war, in Pajok life goes on as normal. This is probably the best indicator possible of Pajok’s relative calm and security.

Although most Pajok residents consider their lives difficult, they are generally happy living in a conflict-free area and glad to be cultivating their ancestral land. However, as the Payam remains significantly underdeveloped, most residents highlight the personal, social, and economic insecurities this lack of development brings. As I just outlined, approached either objectively or subjectively, Pajok’s development needs are many. Even before the current war, a common refrain was that although the community has many needs, because Pajok is neither Dinka nor Nuer and has no oil or other important resources, they have never been important players in the national political economy and thus true power brokers of the national government are unable or unwilling to respond to them.

Further, due to the national government’s inability to provide even the bare minimum of the multitude of developmental programmes required, or to filter virtually any of the billions of US$ of aid money down to needy local communities, many Pajok residents firmly believe their future development depends entirely upon what they themselves can initiate. Indeed, as I have written about elsewhere (O’Byrne 2014; O’Byrne 2015), this belief is also shared by the Pajok diaspora. In fact, between the determination of local workgroups and the funding initiatives of the diaspora, the community has recently been able to begin construction on a large local market (important in ensuring the economic security of the population, particularly small female-owned businesses) as well as to independently fund, build, and staff the new Agola Secondary School.

Educational needs and the future of South Sudan

When asked what their community needs most, almost everyone in Pajok responds the same way: more or better hospitals and schools. Indeed, a deeper look into data in the JSRP Pajok Mapping Paper (O’Byrne 2015) demonstrates that most residents specify education (broadly defined) to be the community’s primary developmental requirement. Almost everyone I spoke to regarded more or better school facilities as among the community’s greatest needs, with several others identifying the most useful developmental initiatives as vocational training or the provision of sponsorship and scholarship money. Further, almost all young people I spoke with said they badly needed the provision of other education-related things, such as the construction of a library and greater access to supplies like books, pens, and school uniforms.

Although Pajok does have one secondary school (Agola Secondary, mentioned above, which serves around 240 students), six primary schools (with nearly 2700 students), and four nursery schools (almost 600 students), the facilities at these schools are poor at best, even by African standards. For example, when a friend who teaches English in the northern Ugandan town of Gulu visited us in Pajok to run a teacher-training workshop (about which I speak more in the final section), one of her very first comments about Pajok’s schools was “And I thought the condition of the schools in Uganda were bad!” Furthermore, most classes have upwards of 50 students (many nearly double this), and almost all teachers work on a voluntarily basis. This means they do not receive a government-paid income but must instead wait on the sporadic and always tardy payment of school fees before they get paid their really quite insignificant salaries of around SSP250 (US$60) per month.

Moreover, the South Sudanese curriculum is taught and assessed in English, no matter students’ exposure to the language. This is a problem for two reasons: not only do most students have almost no exposure to English before attending school, but even teachers often struggle to read, write, or speak fluently. To make matters worse, most teachers have no formal training and, although South Sudan national requirements state all teachers must have secondary school education, this is not always the case. In combination, this means that the standard of education in Pajok is exceptionally low by international standards, just as it is throughout South Sudan.

As mentioned earlier, at one point during our time in Pajok, my wife arranged for a friend who leads teacher-training workshops in Gulu, northern Uganda, to visit us. The main purpose of this visit was a workshop to help train a cross-section of the community’s teachers in Phonics skills as well as to provide knowledge on how to provide a more effective and engaged teaching and learning experience. This workshop was, in the eyes of all concerned, a resounding success, and the teachers involved were talking about how useful the experience was for months later. Almost to a person, they also highlighted how much training they felt they needed and how they felt forgotten by projects that concentrated development and aid initiatives in Juba or Uganda, despite the oversaturation of development programmes and initiatives in these locations.

What I remember most about the experience, however, was how easy and cheap it seemed for a small group of people with no background in such things to organise and run what amounted to a relatively impactful intervention with long-lasting effects for the Pajok community. For a few hundred US$, over the course of a week, 30 extremely enthusiastic teachers were provided skills that will help give the children of Pajok a much better chance at educational achievement than they previously had.

And, I believe, this workshop was exactly the sort of thing that more experienced development or funding providers could give Pajok’s teachers and children on an ongoing basis: the basic skills, knowledge, and chances to make a significant positive difference not only to their own lives, but to their families, community, and their country as well.

From our experience, such programmes can be easily and cheaply organised simply by bypassing major political players as much as is possible and involving locals on the ground in the planning, decision-making, and implementation of interventions. In this way, not only does the organisation of such initiatives guarantee that important skills and resources are brought to and remain in local communities where they are most needed, but it also ensures maximum quality and efficiency of donor effort and expenditure. Indeed, given the current war in South Sudan, as well as the extent of the well-known theft and abuse of top-down developmental aid that funds the neopatrimonalism of the national political marketplace, an effort to actually target the people who really deserve that aid is what the future development of South Sudan demands. After all, the teachers and children of Pajok and similar communities are not only those who most need developmental aid but they are also those for whom it will have the largest and longest-reaching consequences. Such initiatives would truly be an investment in the future. 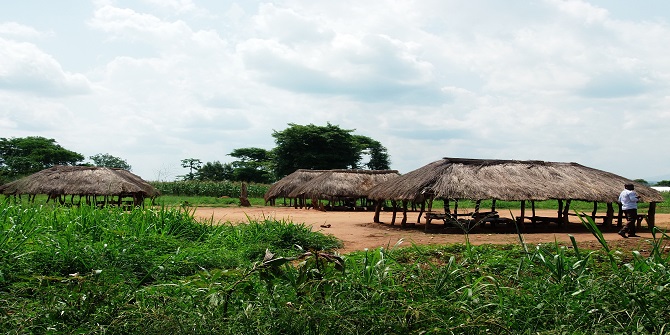