Tom Kirk and Kasper Hoffmann draw on the JSRP’s research to argue that calls to tackle the root causes of conflict and insecurity in many ‘fragile’ and ‘failing’ regions require understanding the multiple ways the state is often present as both an idea and a power-broker.

The JSRP has focussed on places – including parts of the DRC, South Sudan, CAR and northern Uganda – where the state is weak or physically absent, and low levels of violence or conflict affect everyday life. It has sought to uncover how local and international actors working beyond, in-between, and in collaboration with the state often provide security and justice. And it has argued that outsiders wishing to intervene or run developmental initiatives in such places must first understand how this happens.

When the JSRP began in 2014 some practitioners were beginning to use the idea of ‘hybridity’ or hybrid institutions as a way to do this. They suggested that it gave them a vocabulary and framework with which to justify an emerging focus on the types of governance arrangements in the regions they worked, as opposed to simply describing a country’s distance from or failure to live up to Western models of statehood. Nonetheless, as explored in a previous blog, the JSRP eventually came to the conclusion that the hybridity literature contained an overly simplistic understanding of local politics, and that its explanation of how supposedly domestic and international norms or ‘logics of authority’ mix to create governance arrangements painted a unsatisfying image of the processes at play.

As part of these critiques, we found that the concept of hybridity did not capture the manner in which the state, whilst it may be deeply contested or even physically absent, is often present in the JSRP’s research sites as an idea and as an ensemble of practices of rule. Indeed, a literature review into approaches to understanding how public authority is established in conflict-affected places uncovered how non-state actors often appropriate the ‘language of stateness’ or engage in what could be termed ‘state-like’ activities. Such appropriations can be as simple as a vigilante group adopting a uniform, or as complex as a taxation agreement negotiated between militias, businessmen and community leaders.

In this sense, it is notable that many of the JSRP’s own studies revealed how even where the state might be said to be in retreat, actors and institutions still draw upon the language of stateness. For instance, Hoffmann, Vlassenroot and Marchais (forthcoming in Development and Change) show that the taxation practices of armed groups in eastern Congo draw upon and activate the idea of the state. In particular, armed groups evoke local customary and national territorial understandings of citizenship and political community, which enables them to assume roles as public authorities and to tax local populations. Similarly, through long term ethnographic engagements Allen, and Allen and Reid, show how some marginalised Northern Ugandans have begun conducting anonymous votes to decide who is responsible for witchcraft, with the accused exiled so as to avoid violent retributions. In this way, communities and powerholders mimic the actions of absent states in their attempts to add legitimacy to their claims to authority.

Nonetheless, in many of the JSRP’s research sites the state is often present in the form of proxies or unofficial patronage extended to various locally powerful groups. For example, Tapscott’s research suggests that non-state armed actors in Gulu, Northern Uganda, should not be seen as a sign of state weakness. Rather, given its limited resources and the region’s animosity towards central authorities, they represent a pragmatic and efficient mode of governance. Revealing similar dynamics, Schomerus and de Vries argue that the young South Sudanese state’s acknowledgement of local civilian defence groups should be seen as a conscious policy of ‘strategic engagement’. In these ways physically absent or weak states can sub-contract out their responsibilities and maintain a presence in the lives of their populations.

Yet, as Tapscott argues, such practices ‘challenge the boundaries between public and private, legitimate and illegitimate, legal and illegal, formal and informal, and so on’. This creates space for a state-supported forms of unpredictable, arbitrary and, perhaps ultimately, unaccountable governance. For example, Hoffmann and Vlassenroot show how such ambiguities allow non-state armed actors in the Eastern Congo to establish themselves as public authorities and justify their abuses as part of the state’s wider efforts to provide security. And Pendle finds similar dynamics at work in South Sudan, where militias responsible for recent abuses against civilians have since been incorporated into the state, thereby, avoiding culpability.

Alongside such ambiguities, the JSRP’s research also encompasses places within which the state is very obviously present through its security forces. However, it is notable that in many of these situations central authorities have little authority over these forces. As research in South Sudan shows, this can lead to the state tacitly permitting them to engage in state-like practices such as taxation or, as in the Congo’s Kivus region, justice provision and resource extraction. From the perspective of ordinary people, such arrangements can ‘make sense’, which enable army and police forces to become moral arbiters and legitimate public authorities in their own right. Nonetheless, the authors warn these practices can contribute to the militarisation of society, or create fractures as different forces are seen to favour one or other group.

Perhaps even more troubling are situations in which one country’s military has remained on another’s territory for prolonged periods. In the case of the Ugandan military in Southern Sudan, their originally sanctioned but now illegal presence has led to multiple abuses of the local population, illegal trade and difficulties in disarming fighters from the Lord’s Resistance Army. Similarly, their repeated interventions into the Eastern DRC between 1996 and 2003 allowed Uganda military commanders to become de facto public authorities, awarding permits to extract resources, tax trade routes or extort the local population.

Through this brief overview of some of the JSRP’s work it is possible to see that although it may be physically absent or weak, the state is often present in a variety of forms in our research sites. Indeed, one could perhaps talk of a spectrum of state presence, beginning with the idea of the state as appropriated by non-state actors to embolden their claims to public authority; moving through to the state’s use of local powerholders or proxies; and ending most tangibly in situations in which one state’s forces are the de facto powerholders in regions that de jure belong to another.

What is clear from the research, however, is that whichever form ‘stateness’ takes on this spectrum, a priori assumptions about the desirability of such arrangements should not be made. Rather, the form that stateness takes varies from context to context. As such it must be empirically investigated on a case-by-case basis. This raises a number of questions for those looking to address the causes of insecurity and conflict by working with the states responsible for governing such places. These will be explored in further blogs.

Tom Kirk is the JSRP’s Online Editor and a PHD candidate at the London School of Economics and Political Science. Kasper Hoffmann is Postdoc at the Department for Food and Ressource Economics at Copenhagen University and voluntary contributor at CRG/Gent University. He is assisting in the organization of field research in eastern Congo for the JSRP. 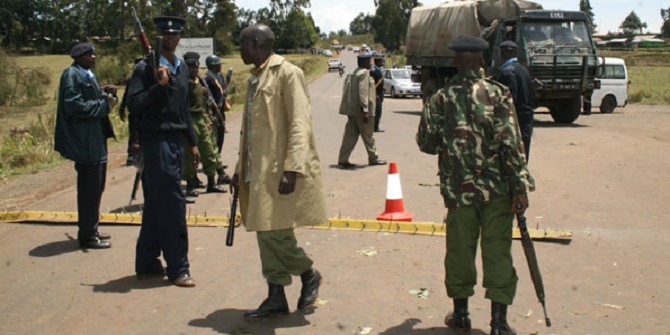