Though Cuba has gained economically from improved relations with the US, it is far from dependent on their continuation. If the Trump administration adopts a hard line, it will hurt emerging entrepreneurs more than the state, while also reinforcing Cuban efforts to find new partners elsewhere, writes Emily Morris.

The most important effect of rapprochement was a significant influx of international visitors. Although US sanctions continue to prohibit US tourism, the number of US visitors has boomed.  Travel remains restricted to ‘purposeful’, licenced trips, but the once arduous licencing process now involves only a simple declaration, and the restoration of direct scheduled flights has helped to meet this new demand. Between 2014 and 2016 the number of US visitors reportedly trebled to 285,000. Although US visitors make up just one tenth of total visitors, the change in US policy has also prompted an unexpected surge in arrivals from other countries. These holidaymakers from Europe, Canada, and beyond are apparently rushing to reach Cuba before it is overwhelmed by a full opening-up to US tourists and business. 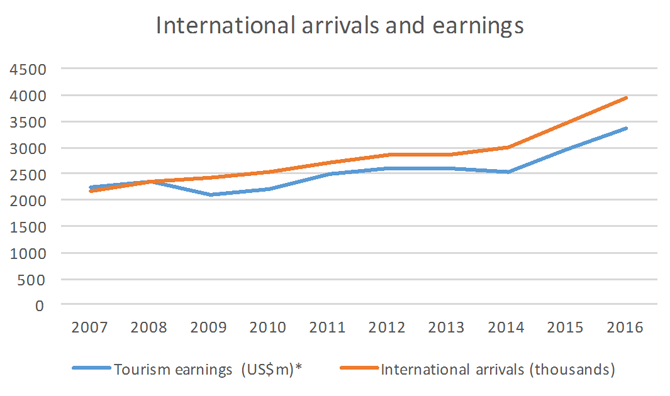 As figure 1 shows (above), Cuba has been enjoying a tourist boom since 2014, with international visitors up by 16% in 2015 and a further 13% in 2016. Using official data for tourism earnings in 2015 and assuming that these flows rose in line with arrivals, this would have lifted total earnings to around US$3.4bn in 2016. The extra spending provided a particularly strong stimulus to the emerging private sector – private renters (casas particulares), restaurants (paladares) and taxis, particularly in Havana, where many prices have more than doubled and innovators have been rewarded.  Private (formal and informal) providers of building and mechanical services have benefited similarly.

This is one reason why Cuban GDP contracted in 2016 (see Figure 2, below) despite the US measures and the related increase in visitors and remittances. Tourism and remittances, while important, do not dominate the Cuban economy. Tourist revenue accounts for only 15% of export earnings and remittance flows for a similar amount. The overall performance of the Cuban economy since 2014 has been determined by other sectors, which have fared poorly for three reasons: US sanctions, most of which remain in place; a reduction in Venezuelan support; and Cuba’s efforts to improve its creditworthiness. 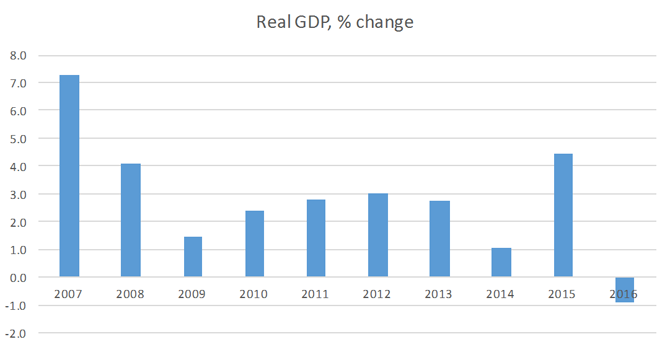 Despite the changes since 2014, Cuba’s goods exports and ability to attract foreign investment are still asphyxiated by US sanctions, most of which remain locked into US law. The scope for relaxing restrictions by executive order was limited, with only minor exemptions (such as for US agricultural exports). Proposals for comprehensive repeal were unable to gain majority support in Congress.  Aside from blocking US-Cuban economic relations, this acts as a major deterrent to trade and investment between Cuba and other partners. 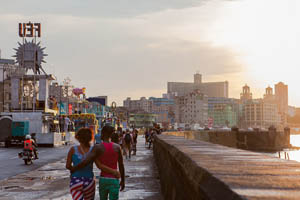 Notes:
• The views expressed here are of the authors and do not reflect the position of the Centre or of the LSE.
• Featured-image credit: cropped version of image by Roberto Rizzato (CC BY-NC 2.0)
• Body-text photo credit: Angelo Domini (CC BY-NC-ND 2.0)

Dr Emily Morris is an Associate Fellow of UCL Institute of the Americas. She has held research and teaching positions at various UK universities, as well as spending thirteen years at the Economist Intelligence Unit, where she specialised in Latin America.

Posted In: Cuba at a crossroads | Economics | Geopolitics | The Trump era 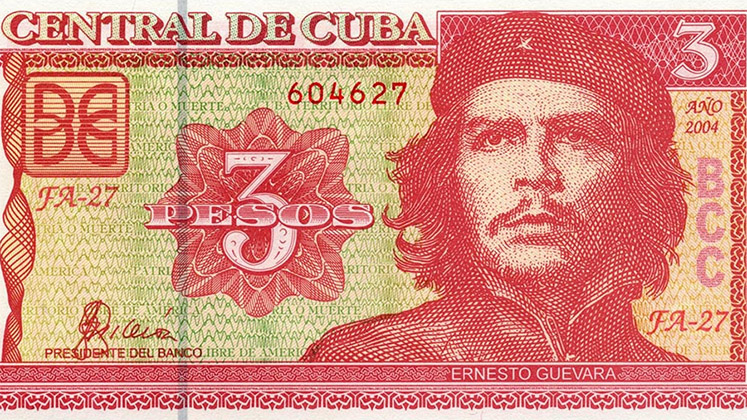